Scholarship Honors Man Who Died by Suicide as He Faced Deportation

Courtesy of Tom Ward
Jose Algara Godoy figured he was going to be deported. For nearly two years, the undocumented Denver resident who worked as a structural engineer — and was originally from Mexico — had been fighting to remain in this country after he was discovered and detained by Immigration and Customs Enforcement in late 2016. Immigration court proceedings moved slowly, but had initially seemed promising for Algara Godoy; with petitioning from his attorneys with Bull & Davies P.C., an immigration judge allowed him to post bond so that he didn’t have to stay in a detention center.

At least twenty friends, co-workers, former employers, neighbors and family members wrote letters on his behalf. Having lived in Colorado for the better part of 28 years, Algara Godoy hoped he could make a case to continue his life here.

But by late 2018, it looked as though Algara Godoy would not be able to overcome an order for his removal. According to his friends, Algara Godoy went into an emotional tailspin. Under U.S. immigration law, it didn’t matter that he had graduated fifth in his class (with a 3.91 GPA) at Gateway High School in Aurora in 2002. What mattered was that he had gone back to Mexico and re-entered the United States on a tourist visa in 2004, then stayed, which is an immigration violation.

As the court case played out, Algara Godoy fretted over his future. Everything and almost everyone he knew was in Colorado. A date for his final hearing — when a judge would likely order his removal — was set for October 3. But Algara Godoy never attended the hearing. On August 1, at the age of 38, he died by suicide.

Now Bull & Davies P.C. has established a scholarship in his name: the Jose Algara Godoy Memorial Scholarship fund. Its first annual fundraiser is being held on Wednesday, December 5, at Epic Brewing Company in RiNo, where all food and drink proceeds will go toward the fund.

According to Tom Ward, the attorney who is organizing the event (and is friends with a manager at Epic Brewing), the Jose Algara Godoy Memorial Scholarship will aid students seeking higher education who don’t qualify for traditional tuition assistance because of their immigration status. The fund will be administered by the 501(c)(3) nonprofit 9to5 Colorado.

The attorney has been in contact with Algara Godoy's friends and family members, some who are flying in from out of state for Wednesday’s event. The loss of Algara Godoy has hit them hard. Ward says that he was struck by the letters of support Algara Godoy had received during his immigration case. 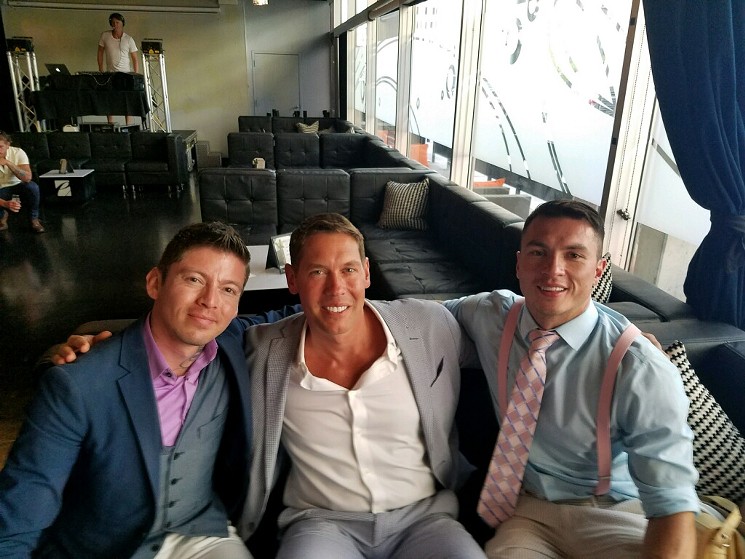 Jose Algara Godoy, far left, with friends.
Courtesy of Tom Ward
"I get clients and people who write character letters on their behalf — you can tell people are doing it because they want to be nice,” Ward says. “Not for [Algara Godoy]. His letters — there are twenty of them — it was like people were pouring out their souls about how much they loved him and how he was such a good friend, with detailed stories about things he did to help them in difficult situations.”

In addition to raising money to help fund higher education for undocumented students, Wednesday’s event will highlight the emotional struggles of individuals who are in removal proceedings.

While there are no nationally available statistics on suicides related to deportations, a number of media outlets have shone a light on disturbing trends. ProPublica and Mother Jones recently found that minors being held in immigration detention centers around Chicago often have suicidal thoughts. In one Baltimore neighborhood earlier this year, suicides plagued an immigrant community, starting with members of at least two families impacted by removal proceedings. And in July, an undocumented man being held in an immigrant detention center in Georgia died by suicide after he found out he was being deported.

The emotional toll of immigration cases can be overlooked, Ward notes. But Jose Algara Godoy’s name will live on through his scholarship. "This is sad,” Ward says. “But it's a reminder of why we do this work, and we're trying to honor him.”

Find more information about the fundraiser on its Facebook event page.
KEEP WESTWORD FREE... Since we started Westword, it has been defined as the free, independent voice of Denver, and we'd like to keep it that way. With local media under siege, it's more important than ever for us to rally support behind funding our local journalism. You can help by participating in our "I Support" program, allowing us to keep offering readers access to our incisive coverage of local news, food and culture with no paywalls.
Make a one-time donation today for as little as $1.