This image from Joshua Cummings' Instagram page shows him pointing an imitation weapon at one of his students (whose identity we've disguised) at a Texas-based jiu-jitsuka academy. Additional images below. Joshua Cummings Instagram
Update: Much more information has emerged about Joshua Cummings, the 37-year-old man who's suspected in the execution-style murder of RTD security officer Scott Von Lanken late on Tuesday, January 31. The former head of a Texas jiu-jitsuka academy who had recently moved to Colorado, Cummings expressed antipathy for police in multiple posts that remained online even as reports surfaced that he reportedly had "Muslim documents" on his person when he was taken into custody and spoke in what sources described as "an Arabic language."

Commander Barb Archer of the Denver Police Department's major-crimes unit offered the most complete public description of the incident to date at a press conference on Wednesday morning, February 1.

As we've reported, Archer said that DPD officers were dispatched to the area of 16th and Wynkoop streets at around 11 p.m. on January 31 following a report of a shooting. Upon their arrival, they found a man, Von Lanken, with a gunshot wound to the head. He was transported to Denver Health Medical Center, where he was pronounced dead. 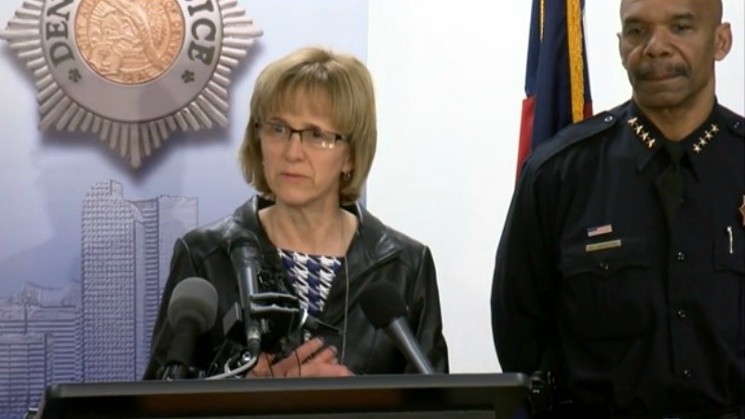 Commander Barb Archer and Police Chief Robert White at a February 1 press conference about the shooting.
Courtesy of the Denver Police Department
Further investigation revealed that two women were speaking to Von Lanken, asking for information about light-rail routes, Archer said. During the conversation, she continued, the women saw a man approach the victim from behind, point a gun to his neck and "heard him say something to the effect of, 'Do as I tell you to,' and then the shot went off." At that point, the victim fell and the suspect fled on foot.

DPD officers soon got information about the direction in which the suspect ran, said Archer, who noted that they also were able to view video from a nearby business. Armed with these details, they began their search and located a man who matched the suspect's description — Cummings — on the 1600 block of 14th Street within twenty minutes. He was taken into custody without incident, and a gun was found that police believe may have been involved in the shooting.

By the way, one of the women is quoted in the Cummings probable-cause statement as saying he had a "swollen face and different/weird-looking eyes."

Von Lanken was a minister who had been working as a security officer to make ends meet. Here's an item about Von Lanken and his wife, Shellie, from Lamp Lighters International Ministry.

On April 21st we were in Russellville, OH with Pastor Scott and Shellie Von Lanken. We have known this couple for a little over a year and had occasion to be involved in their transition to Russellville. From a serious auto accident these servants of the Lord lost everything. On this visit we saw them in a home, with a new car and in the ministry where the Lord transplanted them. What a blessing they are to the Faith In God Fellowship. Without being too forward, we experienced intimacy with our Lord during worship led by Shellie and her team. How refreshing, alive and holy it was. I would drive to the next state again to experience the presence of my Lord that was evoked that Sunday. The people have fallen in love with the Von Lankens. Several were baptized in the Holy Spirit. This dimension of anointing was not the usual for this church but it was welcomed. Thank you Scott and Shellie for enduring the test and allowing God to bring you into our lives. Everyone is glad you did not give up! Thank you for your trust and the gift you gave us!

As for Cummings, an army veteran whose last known address is said to have been at an Englewood motel, he had no criminal record in Colorado and only a misdemeanor beef in Texas dating back to 2010. But law enforcement sources told 7News that he had come to the attention of federal authorities as the result of an altercation at a Texas mosque.

Cummings's Twitter feed features links aplenty to a Facebook page that is no longer online. However, several of the tweets suggest a deep antipathy for police officers, including this one:

What makes you a cop? Not your badge, not your uniform, not your paycheck from the government, and it's not your... https://t.co/BTfEBsiFm8

He also tweeted about the Muslim faith in positive terms....

I seek refuge in the one God from the evils of Satan, and I begin in the Name of Allah, the Most Merciful, the... https://t.co/BLFSugwdaj

...and displayed apparent contempt for Christianity:

Shameless! You have ask yourself the all-too-valid question, "How much of the Christian Bible is nothing more... https://t.co/ca99X5Zrx4

Much more benign is the website for one of the martial arts academies he oversaw, Cave MMA — though there is a mention of "weapons defense" that is "as real as it gets" in the following introductory passage on the home page:


We just moved to Irving, Texas August 1st and are recruiting students for our new academy. We’re looking for people young and old who are ready and willing to learn a new skill that could potentially save their life one day, a new skill that is as fun to practice as it is effective on the street against real-world attackers.

Our program includes training in both Gi and No-Gi environments and includes both striking and grappling during both drilling and sparring. We also teach weapons defense at all ages. Our program is as real as it gets!

Our core curriculum takes a more traditional approach to Jiu-Jitsu for self-defense and includes ground striking and grappling for all ages, joint locking and choking, wrestling takedowns, Judo and Greco throws, and Muay Thai and Western style boxing and kick boxing.

Contact us today to learn how you can become a part of the team!

A Joshua Cummings self-portrait.
Joshua Cummings Instagram
The Denver District Attorney's Office has not yet formally charged Cummings with the murder of Von Lanken.

In the meantime, Allied Universal, the company for which Von Lanken worked (it provides contract security officers for RTD), issued this statement:

Allied Universal is devastated by the loss of our valued security professional, a dedicated six-year employee, who was shot in the line of duty last night while proudly performing his duties in downtown Denver. We offer our deepest condolences to his family, friends and loved ones. The company intends to make a contribution in honor of the family to show our unwavering support. We ask that you join with us in keeping our fallen comrade’s family in your thoughts and prayers.