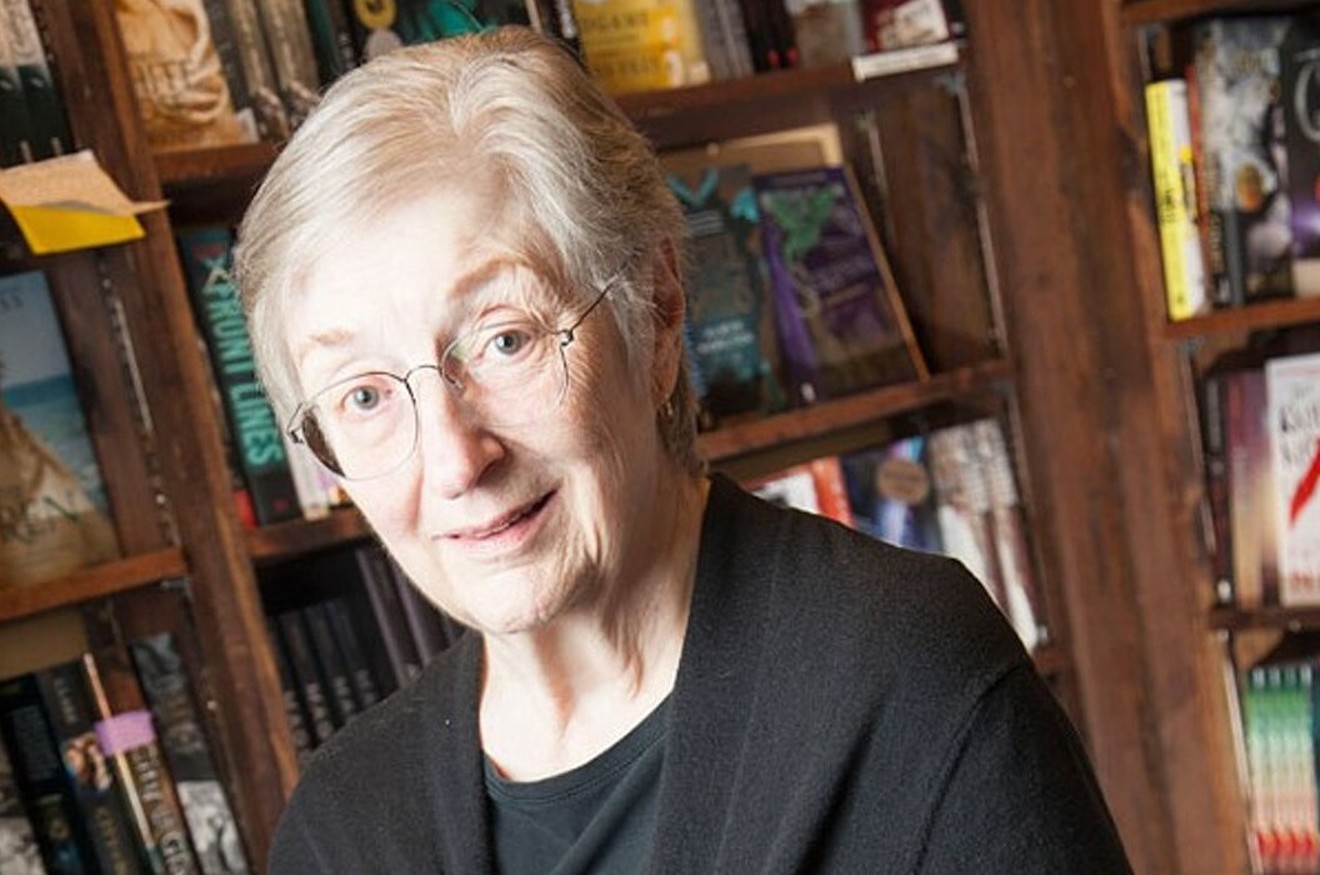 Joyce Meskis in the beloved 16th Street Tattered Cover in 2016. Anthony Camera
Denver is a sadder city today: We lost Joyce Meskis, the longtime owner of Tattered Cover, on December 22. But she left us so much to be thankful for.

It is impossible to imagine what this city would be like had Joyce Meskis not bought a hole-in-the-wall Cherry Creek bookshop from Stephen Cogil Casari in 1974, three years after he founded it. Denver was a very different place then, and the store grew as Denver did, eventually becoming one of the largest and most revered bookstores in America, with branches stretching from Highlands Ranch to Denver International Airport...all thanks to Joyce Meskis.

When Westword started in 1977, she always made sure there was a distribution box in her stores where people could pick up a copy; she championed free speech in all of its forms. She was Westword's neighbor when our office was in LoDo; along with the Wynkoop Brewing Co., we shared a row of season tickets at Coors Field that some wags labeled "hipster haven." And Westword staffers all spent far too much time hanging out at the various Tattered locations, particularly the now-closed spot on the 16th Street Mall, browsing through the stacks and buying books that her staff recommended. That site was always my go-to for last-minute holiday gifts.

But the business wasn't just about selling books. Tattered Cover encouraged new authors and celebrated established ones with readings and other programs. At the same time, Meskis championed the First Amendment both inside and outside of her store. She made headlines in the early ’80s when she became a plaintiff in a challenge to a new state law banning the display of books and magazines that are “harmful to minors” because of their sexual content; the law was later declared unconstitutional by the Colorado Supreme Court. In 1991, when she was president of the American Booksellers Association, she testified before Congress in opposition to the Pornography Victims Compensation Act; the bill died. In 1994, she led Colorado Citizens Against Censorship in opposition to an amendment to the state constitution that would have made it easier to censor material with sexual content; voters rejected the measure. And in 2002, she won another victory in the Colorado Supreme Court after refusing to turn over a customer's records to the police.

“When a person buys a book at a bookstore, he engages in activity protected by the First Amendment because he is exercising his right to read and receive ideas and information,” Justice Michael Bender wrote in the court's decision. “Any governmental action that interferes with the willingness of customers to purchase books, or booksellers to sell books, thus implicates First Amendment concerns.”

In 2015, the Colorado Freedom of Information Coalition recognized Meskis as a First Amendment hero. But as she told us, there were other heroes who deserved recognition: "The many dedicated booksellers, in every aspect of that definition — whether it be receiver, truck driver, buyer, IT guru, accountant, marketer or manager — who have devoted their professional lives to this community of readers we have served for more than forty years."

By then, she was already planning a transition for her beloved business. "The continuation of the Tattered Cover in the event of my death or disability has been a consideration beginning with my own purchase of the store in 1974," Meskis said in 2016 as she worked to pass the business on to new owners Len Vlahos and Kristen Gilligan. "However, the mechanism for that continuation has changed from time to time, as the evolution of business life required different approaches. To bring this question fast-forward forty years, I was having some health issues and received a diagnosis of Parkinson’s Disease. The doctor strongly suggested it was time to get my affairs in order. This wasn’t because she anticipated my imminent death; she didn’t. Rather, it was the unpredictability of the progression of the disease."

The business was also unpredictable, she noted: "With the e-book phenomenon, much of the media had been pronouncing that the book as we know it, paper and ink, is dead. Not to mention Amazon."

And then came the pandemic, and new challenges. Several years after the initial Tattered sale, a group of Denverites banded together to purchase the business in late 2020 under CEO Kwame Spearman.

By then, Meskis had moved on to the activities she told us she was looking forward to in her retirement: "Reading more books and discussing them with my husband; encouraging my grandchildren and other youngsters in their reading and writing; and perhaps other endeavors yet to be identified."

Those endeavors continue at Tattered and at keyboards across the country. Joyce Meskis wrote the book on what it means to be not just a great Coloradan but also a true American hero.

Here's the message posted on the Tattered Cover Facebook page:

It is with deep sadness that we inform you about the passing of the literary force behind Tattered Cover, Joyce Meskis. Joyce Meskis passed away on Thursday, December 22, 2022 surrounded by her family at her home. Joyce purchased Tattered Cover in 1974 and ran the store until 2015. Denver was a very different place then, and after her momentous acquisition, the store grew as Denver did, eventually becoming one of the largest and most revered bookstores in America. During Meskis’s tenure, Tattered Cover was also a bastion of the First Amendment, earning Joyce many awards for her activism.

Joyce is the reason why we are all able to call Tattered Cover home. Joyce was a literary lioness that evolved our industry in a way that few others had done before her. She was also a friend and mentor to so many at Tattered Cover and around the globe....

We are currently coming up with ways to honor Joyce and her global legacy and will keep you apprised of any new information. For now, please hug your colleagues, family, and friends. Life is too short.