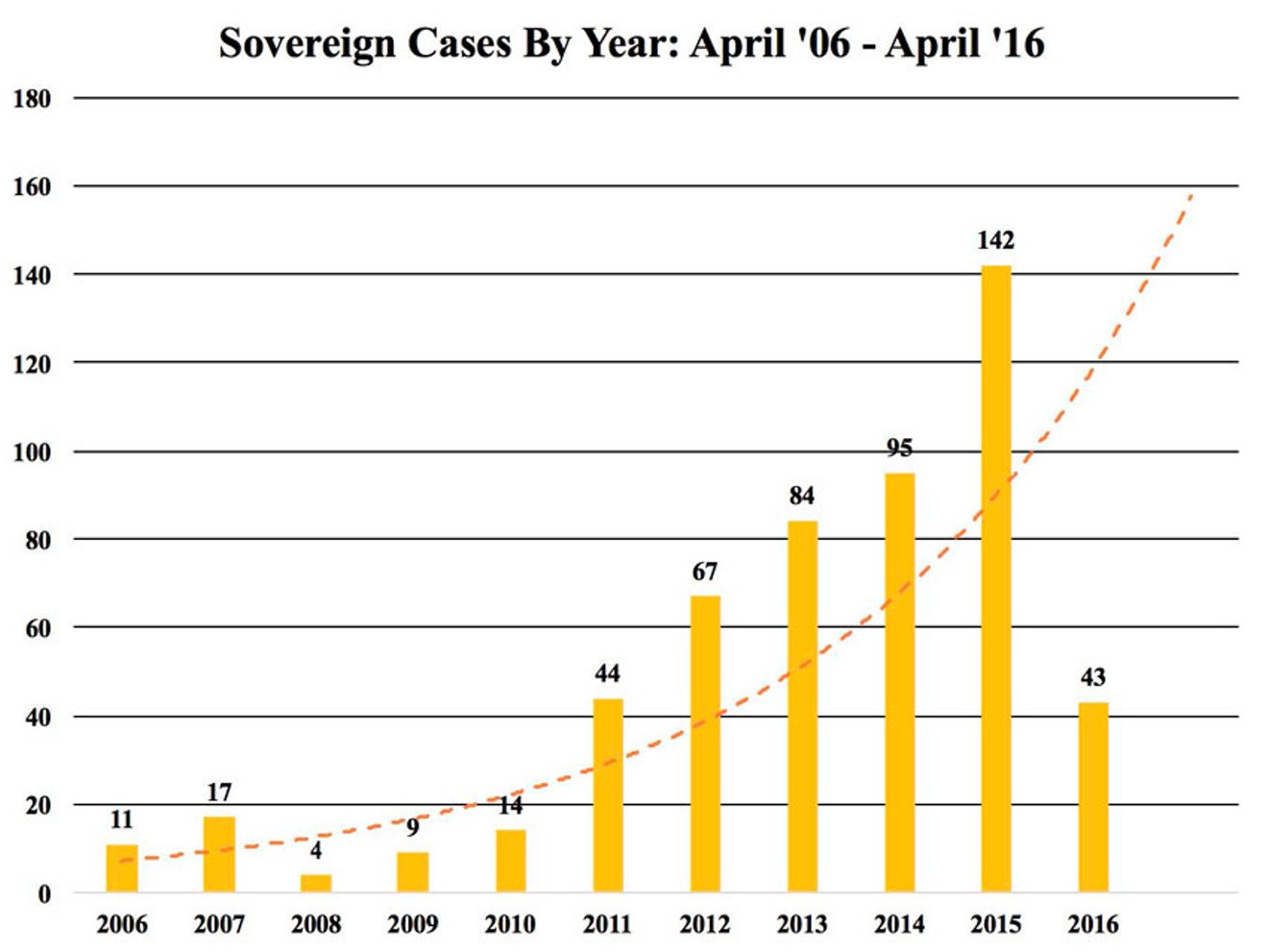 A national study showing the growth of the sovereign ideology and related court cases. Brian Slater/Naval Postgraduate School Thesis & Dissertation Collection
A two-week jury trial ended not with a bang, but with a whimper for Bruce Doucette, a computer-repair shop owner from Littleton who has espoused “sovereign” ideology, declared himself a judge (though he is not recognized by any U.S. court), established a “people’s” grand jury in Colorado outside of the recognized judicial system, and has traveled to assist sovereigns in other parts of the country, including in the San Luis Valley and Oregon (the latter to offer advice to Ammon Bundy and others who staged the infamous Malheur Wildlife Refuge occupation).

On Friday, March 9, a jury found Doucette guilty of 34 counts that he faced. A sentencing hearing is scheduled for May 22.

Many of the 34 charges of which Doucette was convicted fall under what the FBI colloquially calls “paper terrorism,” which in Doucette’s case included sending Colorado officials like judges, district attorneys and even Governor Hickenlooper unofficial versions of subpoenas, arrest warrants and liens. Brian Stauffer
The actions are motivated by a fringe philosophy by which subscribers like Doucette posit that the United States government at all of its levels — federal, state and local — has become so corrupted and has diverged so far from the intentions of the nation’s founders that it’s left up to sovereigns to root out “illegitimate” public officials.
As Westword explained in a May 23 cover story on the subject, “Sometimes calling themselves ‘constitutionalists’ or ‘freemen,’ individuals who subscribe to a sovereign ideology often don’t believe they are required to follow any regulations drafted and passed by politicians — things like tax codes or driver’s license rules — because the U.S. government has been corrupted, and sovereigns are not under contract to adhere to all of its laws.”

According to prosecutors with the Colorado Attorney General’s Office, Doucette and nine other individuals were part of an enterprise known as the “people’s grand jury of Colorado,” through which they would send their paper threats to elected officials (and in some cases negatively affect alleged victims’ credit scores by filing liens).

Late last year, two other members of the aforementioned group, Steven Byfield and Stephen Nalty, were sentenced to 22 years and 36 years in prison, respectively, for many of the same counts Doucette faced. (Read the full superseding indictment here.)

In a December 22 article, we noted that Byfield and Nalty, in refusing to recognize the jurisdiction of a Denver County court, declined to call witnesses or take advisement from a public defender. We concluded that article with this: “Given how things went for Nalty and Byfield, the prospects do not look good for ‘judge’ Bruce Doucette, who is in jail on a bond of $350,000.”

That was an understatement.

Like Byfield and Nalty, Doucette refused counsel at his bizarre trial on March 8 at the Lindsey Flanigan Courthouse. Doucette represented himself before the judge and jury, going up against the full weight of the Colorado Attorney General's Office. He sat alone at a table, surrounded by stacks of documents and thick binders. Physically, Doucette looked put together in a blue button-down, his grayish, white hair slicked back, face clean-shaven.

His demeanor, however, indicated that he was nervous. Doucette bounced his left knee and fiddled with a highlighter in one hand as he attempted to cross-examine special agent Ryan English, an FBI representative on the witness stand.

Making English consult the very same pocket-sized copy of the Constitution that had been seized from him as evidence, Doucette asked pointed questions and hypotheticals about the Seventh Amendment (the right to trial by jury).

“Does it not say that common law applies?” Doucette asked the agent.

“No, that’s a misinterpretation,” English replied on the stand.

“Oh,” Doucette answered meekly, then stalled for more than a minute as he struggled to come up with his next question. He seemed to perk up when he thought of a retort. “So if somebody believes they have a constitutional right to do something, do you believe that they are committing a crime if they believe they are following the constitution?”

“There...could still be [criminal] intent there,” English replied after thinking a moment.

The jury, meanwhile, looked bored and confused on their ninth day of the trial — not a good sign for the defendant.

Stephen Nalty at his sentencing hearing on December 6.
Eric Verlo
At least on Thursday, few came to observe the trial from the gallery. But Doucette’s wife Kim was present. On Facebook, she’d been providing updates on the trial on an account using her husband’s name. On Friday morning, she wrote:

Update- Yesterday Bruce testified and it was Beautiful. He talked about wanting to restore the Republic and remove corruption that has enslaved the people. He talked about not wanting to see his family enslaved by a corrupt govt. The truth started to trickle out when he said he helped set up juries all over the U.S. Up until that point the prosecution had made it seem like there were a small handful of govt officials that were being targeted just for retaliatory reasons. Bruce has finally been able to show that he had no reason to retaliate. Bruce did really well in the cross exam by the prosecution and was able to get in some quotes from Declaration of Independence. He talked about magna carta, Bill of Rights, amendments and sovereignty (until objections). He has Not been allowed to read the Supreme Court cases where people are ruled Sovereign. He asked why the fbi undercover was Not charged with tax evasion from 2013 (I think we all know the answer to that). He said his law comes from heavenly father and 10 commandments. Today he will be giving his closing statement and then jury will go into deliberations. Brand Thornton will be blowing the Shofar and I will be praying during that time.


Later, after the jury came back with its guilty verdict, she added that she and Doucette would appeal.

Her earlier reference to the undercover FBI agent was one of the more interesting revelations of the trial; prosecutors provided evidence of secret audio recordings that an infiltrator, Marshall Ringer, had obtained of Nalty and Doucette discussing how they’d negatively impacted various officials' credit scores by issuing liens on their properties.

Also in the courtroom was local activist Eric Verlo, who’d taken a personal interest in the case and has some sympathy for sovereigns like Doucette. He had been writing about the trial on his blog and had attended four hearings.

"It's been painful to watch this trial because Bruce is flailing. For the kind of issues that [sovereigns] believe, this is not the proper venue to present them,” Verlo says. “It's essentially, in my view, our judicial system using its mechanisms to destroy these men. It's not something that I advocate necessarily watching to learn anything, but it is something that I feel should be supported, because these men deserve our sympathy and empathy. I think they were earnestly trying to change the system, and they face the continued derision of the corporate media, certainly, and the system. They have few friends. And when you're watching the ammunition brought against them — the FBI, the IRS, and all these agents that sit around confidently in the court — you feel like you could get burned just by your interest in this."

Verlo had also attended the sentencing of Nalty in December. “Part of what's self-defeating for the sovereigns is that they don't want to play by the rules,” he points out. “So they don't provide a list of witnesses because they maintain that they don't recognize the jurisdiction of the court. So they're doomed!"