Around the time the guilty verdict against Donthe Lucas was handed down on March 8, the Help Find Kelsie Facebook page posted this image, emblazoned with the words "Never Forgotten." Family photo
Late in the afternoon on March 8, a Pueblo County jury issued a guilty verdict in the trial of Donthe Lucas, who'd been charged with killing his pregnant girlfriend, Denver's Kelsie Schelling, even though her body has never been found.

The location of her daughter's remains is a mystery that will continue to burden Laura Saxton, Schelling's mother, even with Lucas now sentenced to life in prison without the possibility of parole, the mandatory sentence for the crime of first-degree murder. Indeed, in an interview before the trial, Saxton said she was "very open to a plea deal as long as it brings Kelsie home. That's the main thing. I've addressed this over and over again, and I know probably not everyone agrees with it. Justice is important, and I would not want him to walk free for this. But I want my girl home."

Schelling vanished on February 4, 2013, after heading to Pueblo to meet with Lucas, her boyfriend, who'd played basketball for Northeastern Junior College. She was 21 at the time. Ten days later, her car, a Chevrolet Cruze, was located in the parking lot of St. Mary-Corwin hospital in Pueblo.

Pueblo officers subsequently announced that they had looked for Schelling in various parts of the city using canines "specialized in searching for missing persons." But no breakthroughs emerged. Then, at an April 2013 news conference, Saxton, who has regularly spoken with Westword over the years, revealed new information about the pregnancy that motivated Schelling's drive to Pueblo, as well as details about her boyfriend.

Schelling had gotten confirmation of her pregnancy on the day she disappeared, her mother said. Doctor's records confirmed that she was eight weeks pregnant; Lucas was the presumed father. 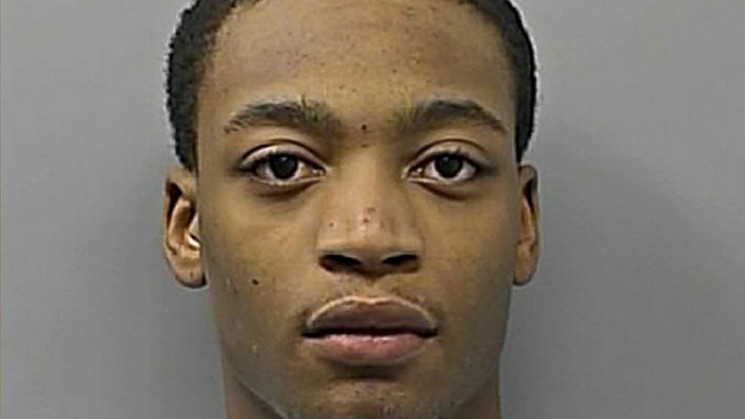 A booking photo of Donthe Lucas.
Pueblo County Sheriff's Office
"Cell-phone records show that Kelsie sent picture messages of her ultrasound pictures taken that day to family members and also to Donthe and his mother," Saxton said at the time. "Cell-phone records also show that Donthe asked Kelsie to come to Pueblo when she got off of work that night because he needed to speak with her in person. ... We know that Kelsie made it to Pueblo and did meet up with Donthe. No one has seen or heard from her since."

In the years that followed, Lucas continued to be the focus of the investigation, but little progress was made. As Saxton noted in January, the situation improved "when the CBI [Colorado Bureau of Investigation] came on board and there was a total overhaul of the crimes-against-persons unit at the Pueblo Police Department. Basically, everyone from the chief down to the detectives that were over Kelsie's case were all new people. They came in, and that really changed the tone and the relationship between us."

The inquiry really began heating up in April 2017, when law enforcement officers excavated the backyard of Lucas's former residence, at 5113 Manor Ridge Drive in Pueblo; they dug up a field not far from the house the following month. Weeks later, the home was damaged by a fire investigated as possible arson. Another round of searches was conducted in the week or two before Lucas was arrested; he was charged in December 2017 and pleaded not guilty in August 2018.

A series of delays prevented the matter from coming to trial even before the start of the COVID-19 pandemic, which slowed the process further. But the trial finally started early this year, with the prosecution laying out a theory that Lucas strangled Schelling shorter after her arrival in Pueblo.  Lucas's defense counsel called no witnesses and rested the case on the morning of March 8. After closing arguments, the jury deliberated for fewer than three hours before determining that Lucas was responsible for Schelling's death.

In post-verdict remarks, Saxton said she was "very thankful" for the jurors' decision, but added: "In the end, I didn't get Kelsie back, and that's what I wanted more than anything."

Those words echo others she shared with us before the trial began: "I want to be able to go to the cemetery and bring her flowers. I have nothing like that right now. But I don't believe Donthe is ever going to let us know where she is. That's his last control over her, and he knows that's what I want the most. It's just another way for him to continue to torture me."
KEEP WESTWORD FREE... Since we started Westword, it has been defined as the free, independent voice of Denver, and we'd like to keep it that way. With local media under siege, it's more important than ever for us to rally support behind funding our local journalism. You can help by participating in our "I Support" program, allowing us to keep offering readers access to our incisive coverage of local news, food and culture with no paywalls.
Make a one-time donation today for as little as $1.