Sentenced to life in prison, Kenny Cobbin found his life's calling in training dogs. Conor McCormick-Cavanagh
Kenny Cobbin has his dog, Cooper, on a string as he walks him along the quiet streets of Green Valley Ranch. Cooper, a mixed breed that presents like a golden retriever, responds promptly to all of Cobbin's commands: sit, high five, come back.

Cobbin didn't follow instructions nearly as well when he was young. After moving to Denver when he was twelve, he started stealing. "It was just me not doing the right thing. I was just a little, young, dumb kid," he recalls.

But in 1988, then-27-year-old Cobbin was convicted of aggravated robbery, which led to a mandatory life sentence as a habitual offender. With the possibility of parole forty years away, Cobbins remembers hearing that sentence read and thinking, "Wow, I just ruined my life."

Cobbin began doing his life sentence at Limon Correctional Facility. For the first fourteen years, he "became really litigious," he remembers, filing appeals and trying to get his conviction overturned or his sentence lessened. In 2006, he was transferred to Territorial Correctional Facility in Cañon City, and that's when his life began to change.

Four years earlier, the Colorado Department of Corrections had started offering the Prison Trained K-9 Companion Program in certain facilities. The program connects dogs from shelters, rescues and private individuals having trouble caring for their pets with people serving time in state prisons, who receive training on how to handle the animals. (The CDOC declined to make a program staffer available for an interview.)

Cobbin quickly signed up for the K-9 program. "I guess you could consider me a model inmate, so to speak," he says. "I took advantage of all the programs and opportunities that I could that were available to me." 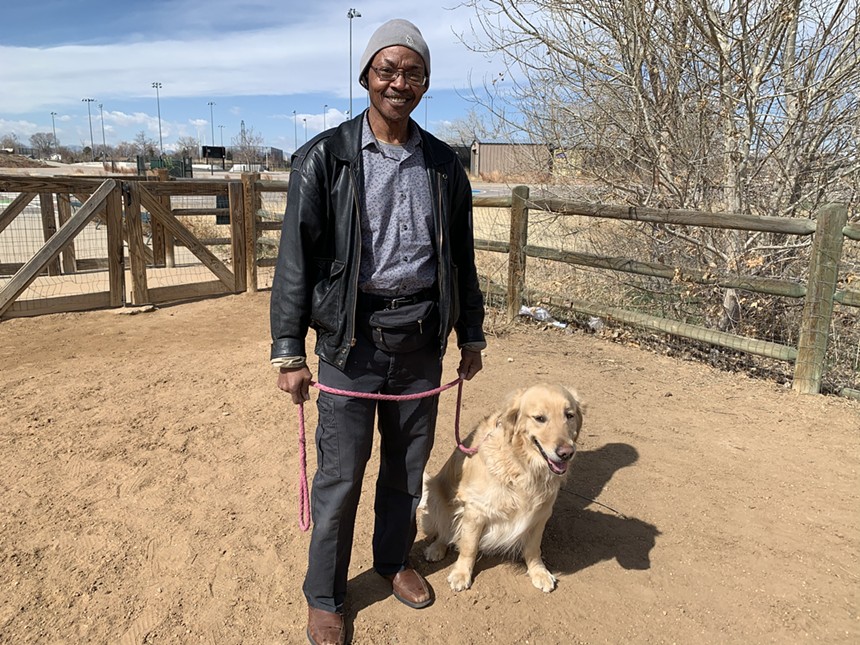 Cooper is a good dog.
Conor McCormick-Cavanagh
He became so involved with the K-9 program that he started thinking about ways it could be improved. At the time, the curriculum focused on negative reinforcement for training the dogs. "I was really opposed to that," Cobbin says, pointing to the use of prong collars as a particularly cruel practice. "So I pitched positive reinforcement theory to the teacher."

The teacher allowed Cobbin to pursue positive reinforcement, and it worked — both for him and the animals. "When I left," he notes, "they went to a balanced perspective."

Cobbin's early leave was made possible by a 2015 bill at the Colorado Legislature that proposed allowing inmates sentenced to life in prison to become eligible for parole earlier through participation in programs and rehabilitation treatment.

Dianne Tramutola-Lawson, a Denver Public Schools English teacher who in 1990 founded the Colorado chapter of Citizens United for Rehabilitation of Errants (CURE), a national organization that advocates for prison reform, had lobbied for that proposal. "Thank God that passed," she says of the bill, which then-Governor John Hickenlooper signed into law. "Miracles happen."

It was certainly a miracle for Cobbin, who'd been a student of Tramutola-Lawson's in high school. "For some reason, I just followed him all the years, through and through, his whole life," she says.

With the new law on the books, Cobbin was able to get parole in 2017, ten years ahead of schedule. The next year, he started offering dog-training classes, and then began boarding and training. "Dianne was very instrumental in that," he says. "She knew that I loved dogs, and she just kept pushing me and pushing me in that direction."

"He’s very intelligent and caring. He’s like the dog whisperer to me," she says.

Once out of prison, Cobbin participated in a community development and leadership program run by CrossPurpose, a local organization that often works with newly released individuals on career development. Through CrossPurpose, he competed in a fundraiser and was able to raise $30,000, which he invested in a dog-training business, Gifted Paws.

He shared his life story with Colorado Attorney General Phil Weiser at an event a few years ago.

“I had the pleasure of meeting Kenny Cobbin at the CrossPurpose Center four years ago," says Weiser. "He has built a successful dog training business and created a new life for himself after leaving prison. His story inspires our work at the Colorado Department of Law to improve re-entry outcomes for those leaving prison and enhance public safety." 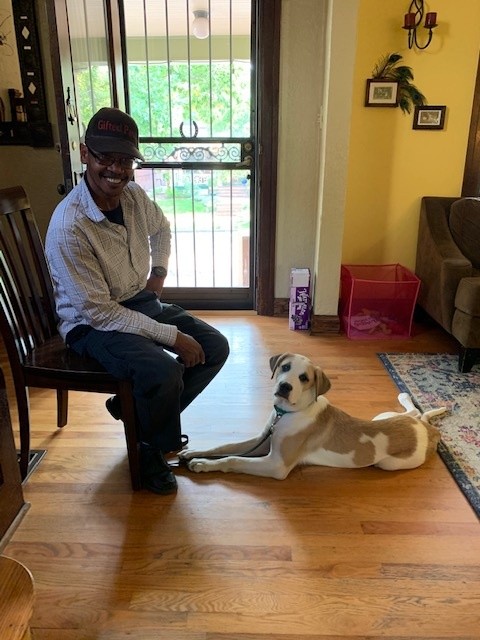 Kenny Cobbin with Bowie, one of his charges.
Courtesy of Niccole Sacco
Cobbin's work is not only inspirational but important, according to Niccole Sacco, a Denver attorney who got a dog during the early months of the COVID pandemic, "like a lot of people did," she says. "I went and got this rescue dog, and he was a puppy, four months old, and as soon as I got him home, I was like, 'Oh, my God. What have I brought upon myself?'"

Finding a long list for the K-9 program, she turned to Cobbin, who runs Gifted Paws out of his Green Valley Ranch home. "I just knew he knew his stuff," she recalls.

Sacco sent her belligerent Bowie, a Great Dane, Pyrenees and St. Bernard mix that she describes as "a big, floppy, absolutely gorgeous animal" to Cobbin for a four-week training period. He came back a well-behaved pup.

Cobbin also offered training for Sacco and her kids on how to deal with the dog going forward. And any time behavioral issues pop up, Sacco takes Bowie back to Cobbin.

"I just imagine what it’s like for him having just come out of the system," Sacco says. "He’s really good at it, really quite successful at it. He never shows any frustration. It’s challenging for him to run this business, especially during the pandemic."

While business has definitely ebbed and flowed over the last two years, Cobbin is still enjoying building a new life on the outside.

"When I was in prison, those of us that want to make a difference and change our lives, you’re looking for things you can do that will possibly help you," he explains.

And by helping himself, Cobbin is now helping others, both canine and human.
KEEP WESTWORD FREE... Since we started Westword, it has been defined as the free, independent voice of Denver, and we'd like to keep it that way. With local media under siege, it's more important than ever for us to rally support behind funding our local journalism. You can help by participating in our "I Support" program, allowing us to keep offering readers access to our incisive coverage of local news, food and culture with no paywalls.
Make a one-time donation today for as little as $1.