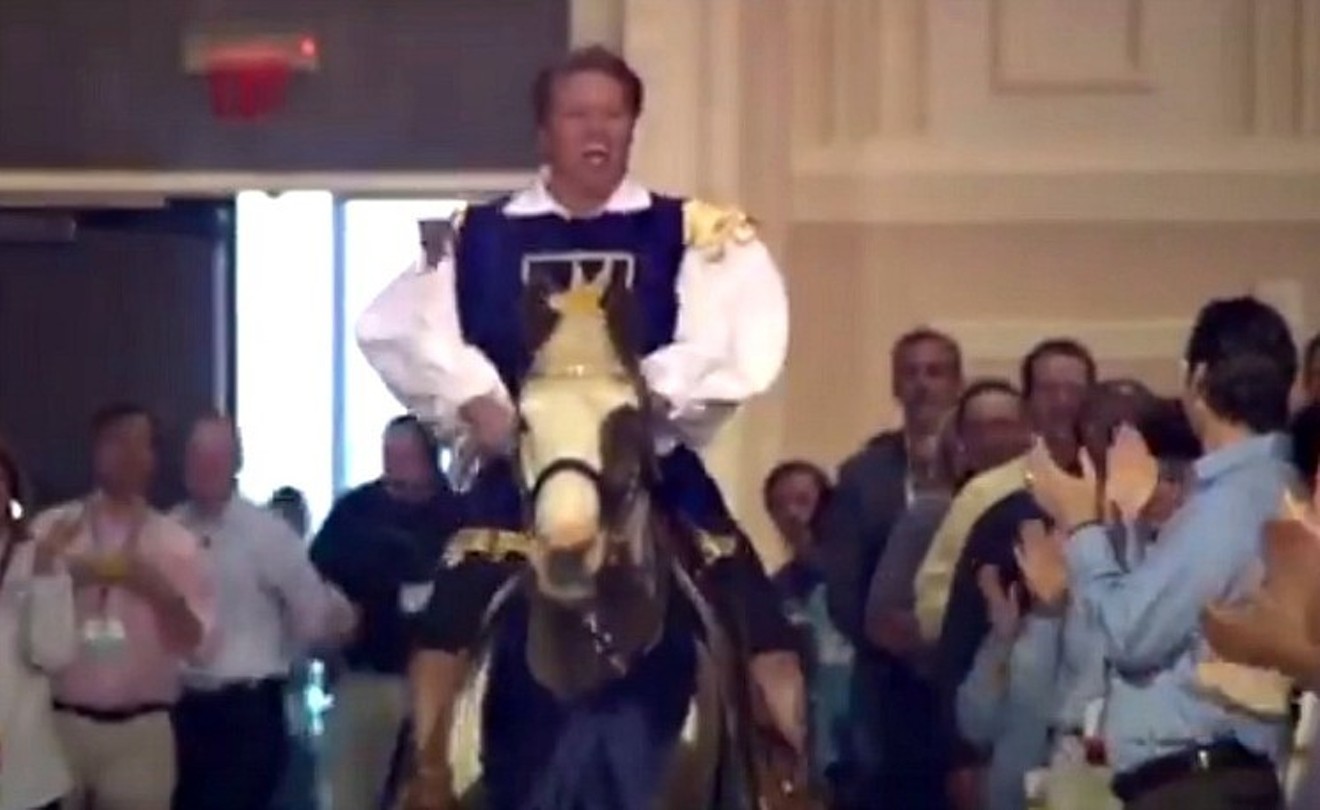 Kent Thiry getting medieval at a DaVita event, as seen on Last Week Tonight With John Oliver. HBO via YouTube
On July 15, Kent Thiry, the former CEO of Denver-based DaVita, a giant in the kidney dialysis industry, was indicted by the U.S. Justice Department in connection with what prosecutors describe as a scheme to prevent other companies from raiding DaVita's top talent. The company is named as a defendant, too.

The feds' case is the latest challenge to Thiry, an eccentric figure whose former outfit, the tenth-largest employer in Denver, was memorably filleted by HBO's John Oliver, whose 2017 super-segment (it's 24 minutes long) noted lawsuit settlements totaling nearly $1 billion — and more complaints followed. Yet Thiry, who denies wrongdoing in regard to the Justice Department's claims, seriously considered running for governor of Colorado and collaborated with the man who got the job, Jared Polis, on an economic program addressing the COVID-19 pandemic last year; he also pushed successful redistricting amendments Y and Z.

The decision by DaVita to move to Colorado was big economic news here in 2009, and the construction of its local headquarters stood out among many big Denver projects over the past decade. The downtown building's size and scale made sense given DaVita's success: Last Week Tonight pointed out that the company generated $789 million in profits in 2016, and the numbers have only grown since then: A February 2021 DaVita press release boasted "consolidated revenues of $2.905 billion and $11.551 billion for the three months and year ended December 31, 2020, respectively." Moreover, of the more than 7,000 outpatient dialysis clinics currently operating in the U.S., nearly 3,000 operate under the DaVita nameplate.

The man credited with DaVita's rise was Thiry, whom Oliver described as a "showboating musketeer," and for good reason. Multiple videos of company events show Thiry dressed in medieval garb while making splashy entrances; he rode in on a horse at one bash, and did tumbling moves to Bob Seger's "Old Time Rock & Roll" in another. The former Bain & Company powerhouse's choice of wardrobe was influenced by his love for the movie The Man in the Iron Mask, and he got a jolt out of getting his employees to chant, "All for one and one for all."

But Oliver and company didn't portray DaVita in heroic fashion. Instead, they suggested that the corporation operates its clinics in assembly-line fashion, shuttling patients in and out as quickly as possible in order to maximize profits. This approach was underscored by a Thiry address at UCLA in which he said DaVita operated on the same principles as Taco Bell.

After noting numerous settlement deals involving DaVita (one for $55 million, another for $389 million and a third for $489 million), Oliver leveled his most damning accusation, alleging that DaVita inadequately informed patients that their survival rates were much higher if they got a kidney transplant instead of remaining on dialysis.


DaVita suffered more bad publicity after the Oliver piece; see our post about a lawsuit that echoed many of Last Week Tonight's charges. And two months later, Thiry announced that he had decided against seeking the governorship in 2018 with this statement: "I have held onto the dream of running for office since I was ten years old. That’s why it is with deeply mixed feelings that my wife Denise and I have decided now is not the right time for me to run for Governor of Colorado. I remain passionately committed to advocating for bipartisan solutions to our challenges, as I would have done as governor."

This last theme is reinforced by Thiry's LinkedIn bio, which emphasizes civic and social initiatives in this passage: "In 2016 he founded Let Colorado Vote, which passed four ballot initiatives in the last three years. One re-established the presidential primary in Colorado, a second opened primaries to independent voters and the most recent two reformed redistricting practices in the state. In 2018, Kent founded a CEO Group, called Colorado Thrives, focused on advancing the quality of life for all Coloradans. He also co-founded The Aspen Group with Senators Bill Frist and Tom Daschle, and COIN (The Colorado Innovation Network) with Governor Hickenlooper and others. Kent is also on the Advisory Board of NatureVest, a unit of the Nature Conservancy."

Thiry stepped down as DaVita's CEO in 2019; he's currently serving as an advisor for KKR & Co. Inc., a global investment firm in New York City. And he appeared with Polis at an August 2020 press conference announcing a program called Energize Colorado, which was intended to help the state fight back economically after the rise of COVID-19. "I often talk about how a lot of other states have residents, but Colorado has a lot of citizens — not in the legal sense, but in the sense of stewardship, accountability, pride and a sense of caring for all people," Thiry said at the time.

The Justice Department's indictment, however, suggests that Thiry cared more about retaining top executives than allowing them a shot at bettering their situation. According to a July 15 release from the department, the indictment "alleges that DaVita and Thiry both participated in two separate conspiracies to suppress competition for the services of certain employees. Count One charges DaVita and Thiry for conspiring with SCA [alleged co-conspirator Surgical Care Affiliates LLC] to allocate senior-level employees by agreeing not to solicit each other’s senior-level employees from as early as February 2012 until as late as July 2017. Count Two charges DaVita and Thiry for conspiring with another health care company from as early as April 2017 until as late as June 2019 to allocate employees by agreeing that the other health care company would not solicit DaVita’s employees."

Says Richard Powers, acting assistant attorney general for the Justice Department's antitrust division, "Those who conspire to deprive workers of free-market opportunities and mobility are committing serious crimes that we will prosecute to the full extent of the law. We are grateful for our partnership with the FBI and our shared commitment to rooting out illegal collusion targeting labor markets."

In response, Thiry issued the following statement: "These allegations are false and rely on a radical legal theory about senior executive recruitment without precedent in U.S. history. The government took steps to ignore — and even hide — key evidence. The facts bear it out decisively: No antitrust violations occurred, these companies hired DaVita executives for years, and the companies are not competitors.”

DaVita offered its own take: "The charges against the company are unjust and unwarranted. The government’s case relies on an unprecedented and untested application of the antitrust laws to alleged discussions involving a former executive that occurred many years ago. We will vigorously defend the company against this unjustified action. The evidence will demonstrate the government has chosen to unjustly attack our reputation."

But the feds are far from the first to do so. Click to read the Kent Thiry indictment.
KEEP WESTWORD FREE... Since we started Westword, it has been defined as the free, independent voice of Denver, and we'd like to keep it that way. With local media under siege, it's more important than ever for us to rally support behind funding our local journalism. You can help by participating in our "I Support" program, allowing us to keep offering readers access to our incisive coverage of local news, food and culture with no paywalls.
Make a one-time donation today for as little as $1.