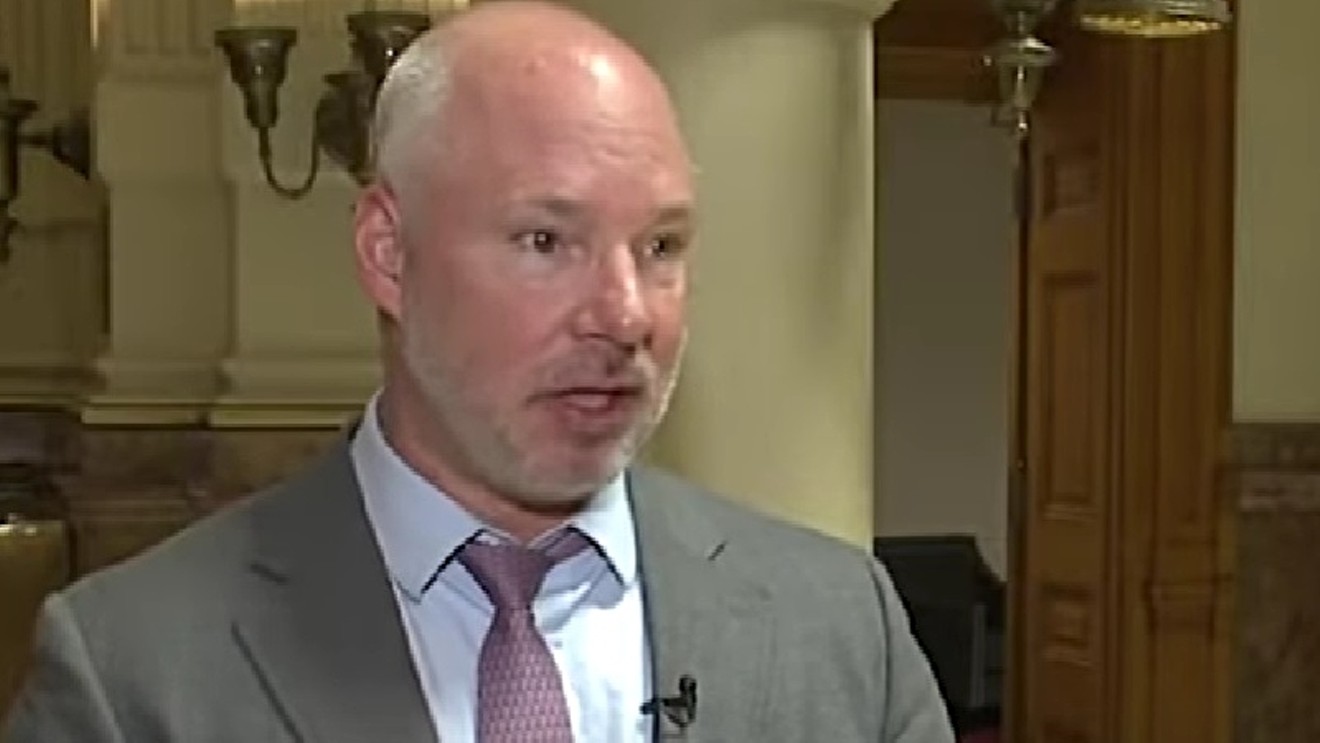 Senator Kevin Priola is at the center of the storm. Fox31 via YouTube
On October 11, Denver District Court Judge Marie Avery Moses put a temporary halt to a recall aimed at state senator Kevin Priola — an effort prompted by Priola's August announcement that he had switched his party affiliation from Republican to Democrat. But the campaign plans to appeal the ruling and continue collecting signatures on petitions demanding his ouster.

Even if these efforts are unsuccessful, the group hopes to send a message to other officials about the price to be paid for changing loyalties.

Priola's swap is hardly unprecedented. A comprehensive list of party switchers includes nine Coloradans, including U.S. senators Ben Nighthorse Campbell, who went from Democrat to Republican after taking office, and Floyd Haskell, who shifted from Republican to Democrat prior to his election. But in the current political climate, such a move is considered tantamount to apostasy — particularly since Priola's move could boost Democratic efforts to maintain majority control of the Colorado Senate.

In 2020, Priola was elected to a four-year term in Senate District 25, but redistricting moved him outside the area's lines and into Senate District 13. That scenario could have gotten complicated, since the state constitution doesn't allow an incumbent legislator to lose a spot because of redistricting. But because John Cooke, the senator representing the very conservative District 13, is term-limited, Priola will automatically take his place in January.

Against this backdrop, Priola released a letter on August 22 in which he described how disturbed he'd been by conversations with Republicans who believed false claims about the 2020 election having been stolen from President Donald Trump. But while those chats were "deeply concerning," he stressed that "the attack on our democratic system is not the only existential threat that the Republican Party is choosing to ignore" — namely the climate crisis. "It's immoral to saddle the next generation of Coloradans with even worse impacts, he said. "Yet my Republican colleagues consistently, and proudly, seek to impede progress on any reasonable climate measures the legislature has undertaken — and I can't, in good conscience, be silent about that." For these reasons, he added, "I'm announcing that I have changed my party registration from Republican to Democrat. I will begin caucusing with Democrats instead of Republicans. To be clear, I will not be changing the way I vote on legislation. I just simply will now cast my votes with a D next to my name instead of an R."

As Priola acknowledged, "We are in the midst of an election that will determine which party controls the Senate Chamber" — but "even if there will continue to be issues that I disagree with the Democratic party on [for example, he's pro-life], there is too much at stake right now for Republicans to be in charge. Coloradans cannot afford for their leaders to give credence to election conspiracies and climate denialism. Simply put, we need Democrats in charge because our planet and our democracy depend on it. It continues to be the honor of a lifetime to serve my constituents, and I will continue to fight, first and foremost, for their best interests. I believe my decision to align with truth over conspiracy is indicative of that commitment."

Shortly thereafter, an advocacy organization dubbed Advance Colorado Action formed the "Recall Priola Issue Committee," and began the process of earning authorization from Colorado Secretary of State Jena Griswold. On September 9, Griswold's office formally granted approval of the group's petition and gave proponents sixty days, through November 8, to collect the 18,921 valid signatures needed to prompt a recall election. That same day, Advance Colorado Action's Michael Fields confirmed that a signature-gathering operation would launch immediately, and said that $130,000 had already been raised to fund it.

"Kevin Priola is totally out-of-step with the voters of Senate District 13 — which is why there is real grassroots enthusiasm for this recall effort," Fields stated. "Priola even threatened to sue to avoid having to face the voters of his new district. If Priola doesn’t want them, they shouldn’t want him. We look forward to getting the necessary signatures to let voters decide who they want to represent them for the next two years."

It didn't take long for the lawsuit Fields mentioned to arrive. A document filed by a group called Colorado Over Party on September 12 bases much of its argument on Priola's district change, contending that a recall would deprive "the electors of S.D. 25 their state and federal constitutional rights to participate in the recall procedure, whether for or against." Moreover, they maintained that there is "no constitutional or enabling legislation that would permit the electors of one senate district to participate in the recall procedure of a senator elected by and who represents the electors of another district."

Judge Moses's opinion acknowledges these complexities. She ordered the recall group to wait to collect signatures until January 9, when Priola will be sworn in as the senator for District 13.

In a statement, Priola celebrated the decision, which "upholds the rule of law and the integrity of our independent redistricting process," he said. "I am pleased the Court agreed that this special-interest-driven recall effort was built on a faulty premise. The voters of Senate District 25 deserve a say in who represents their interests at the State Capitol, and today’s ruling ensures deep-pocketed partisan interests won’t be allowed to take that right away."

Added Colorado Senate President Steve Fenberg: "Recalls are an important process meant to root out politicians guilty of corruption or malfeasance, not for political operatives and special interests to seek revenge against lawmakers they disagree with. Allowing Senator Priola to be recalled by voters in a district that he doesn’t yet represent would have created a cascade of ridiculous recall efforts every redistricting cycle. I am glad the Court sided with the rule of law preventing taxpayers from having to foot the bill for this politically motivated attack."

For his part, Fields said that "Coloradans have a constitutional right to recall our elected officials. Throughout this process, we have simply followed the instructions set out by the Secretary of State. We will appeal this ruling. In the meantime, we will continue to collect signatures. We’ve already gathered more than 15,000 total signatures."

Expect the attacks on Priola to continue, as well. Note that on September 13, the day after the lawsuit dropped, the Denver Gazette published a piece with the headline "Kevin Priola Used Text Messages During Party Switch to Avoid Open Records Scrutiny" — an issue that will no doubt be spotlighted whenever the recall bid ramps up again.

Click to read Kevin Priola's open letter about switching parties and Colorado Over Party, et al., v. Jena Griswold.
KEEP WESTWORD FREE... Since we started Westword, it has been defined as the free, independent voice of Denver, and we'd like to keep it that way. With local media under siege, it's more important than ever for us to rally support behind funding our local journalism. You can help by participating in our "I Support" program, allowing us to keep offering readers access to our incisive coverage of local news, food and culture with no paywalls.
Make a one-time donation today for as little as $1.