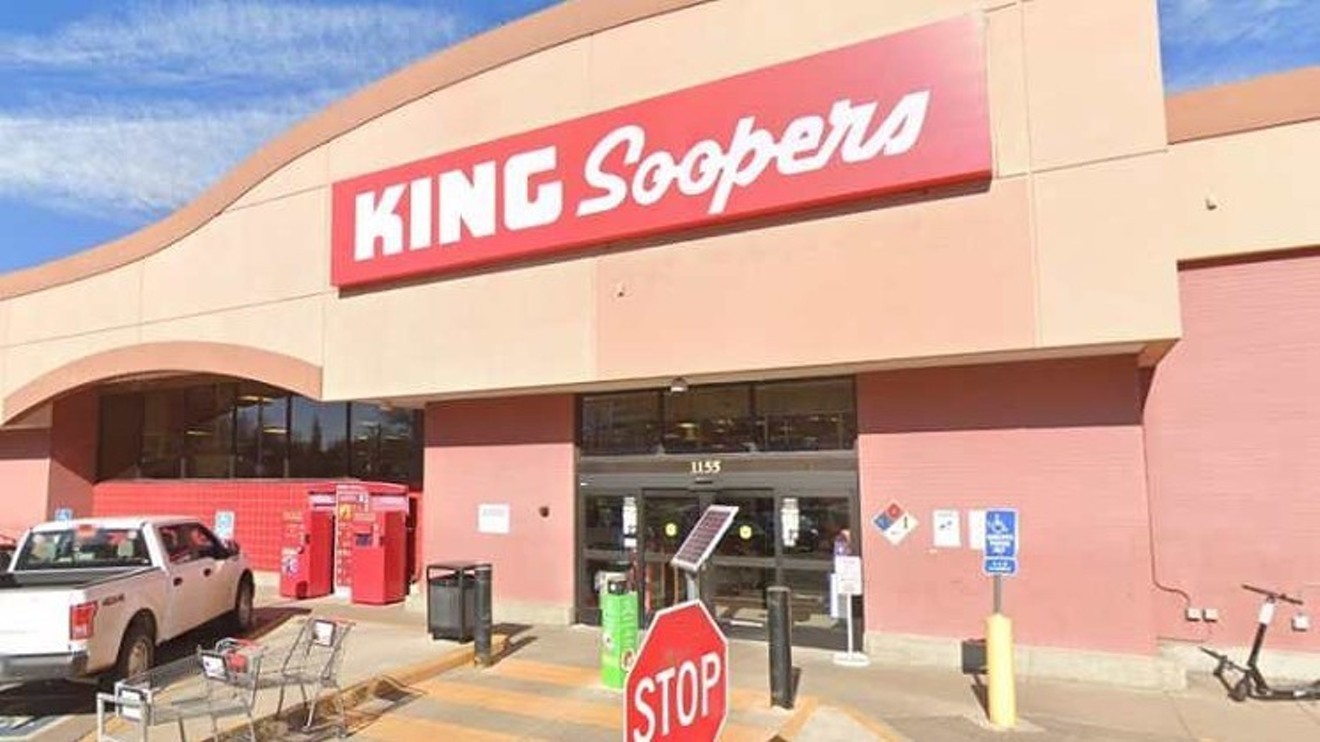 Outside the King Soopers branch at 9th and Corona in Denver. Google Maps
Editor's note: The members of United Food and Commercial Workers Local 7 have ended their labor action against King Soopers. Get details in our post "King Soopers, Union Reach Tentative Agreement to End Strike." Continue for our previous coverage.

Earlier today, January 7, United Food and Commercial Workers Local 7 announced that a strike against King Soopers following a vote by union members authorizing this action would get underway at 5 a.m. Wednesday, January 12.

Now King Soopers — which, in combination with sister outlets that operate under the City Market tag, is Colorado's largest grocery chain — has fired back at Local 7, which represents approximately 17,000 employees at 148 stores in the state plus two in Wyoming. A news release from the company accuses the union of restricting worker choice by refusing to let them weigh in on what's characterized as a generous contract offer. Moreover, company president Joe Kelly suggests that by taking this tack, the union has put the financial and physical well-being of employees at risk.

In a statement, Kelly says: "At a time when we want to invest more than ever in wage increases and affordable health care, Local 7 has chosen disruption and the unknown for our associates and their families. We care deeply about associates, which is why we've come to the table with a robust offer that is the best offer in King Soopers/City Market's history, that puts more money in our associates' pockets while maintaining our commitment to invest in the whole person with industry-leading health care."

King Soopers and Local 7 have been engaged in negotiations for a new contract over recent months; the current pact expires at 11:59 p.m. January 8. But on December 29, Local 7 filed a lawsuit (click here) for what it described as "breach of contract over vendors in the stores." Days later came strike votes in greater Denver and Colorado Springs, followed by this morning's date-setting for a walkout.

According to a statement from Kim Cordova, the president of Local 7 and vice president of UFCW International: "UFCW Local 7 members who work at King Soopers have had enough of the Company’s unfair labor practices and will strike starting January 12. This is a direct result of the Company’s bad faith at the bargaining table. King Soopers is enjoying record profits while leaving its workers to struggle with low wages. Grocery workers ensure that our communities have access to food, but they cannot even afford to feed their own families. This is grossly unfair. King Soopers has chosen to enrich its bottom line, instead of protecting workers who have risked their lives on the front lines."

The company's take is very different. The move to "call for a strike authorization over alleged unfair labor practices in the middle of contract negotiations" is said to have "created confusion and is allowing Local 7 to restrict King Soopers/City Market associates, their members, from voting on the real issue at hand — their contract," the company says. "A vote on the current proposal would allow associates to choose what is best for them and their families. This decision further demonstrates Local 7’s desire to push its own agenda with no regard for its members."

Other information provided by the company for "additional context" includes:

King Soopers and City Market will remain open during the strike, which is scheduled to continue through February 2, "to provide fresh food and other essentials to the communities they serve," the release stresses.

Adds Kelly: "While we respect our associates' rights to participate in this work stoppage, any associate who chooses to continue to work is welcome. We remain open to continuing to meet with Local 7 to come to an agreement that is good for our associates while keeping groceries affordable for customers."

Westword has reached out to UFCW Local 7 for its response to the company's positions.
KEEP WESTWORD FREE... Since we started Westword, it has been defined as the free, independent voice of Denver, and we'd like to keep it that way. With local media under siege, it's more important than ever for us to rally support behind funding our local journalism. You can help by participating in our "I Support" program, allowing us to keep offering readers access to our incisive coverage of local news, food and culture with no paywalls.
Make a one-time donation today for as little as $1.