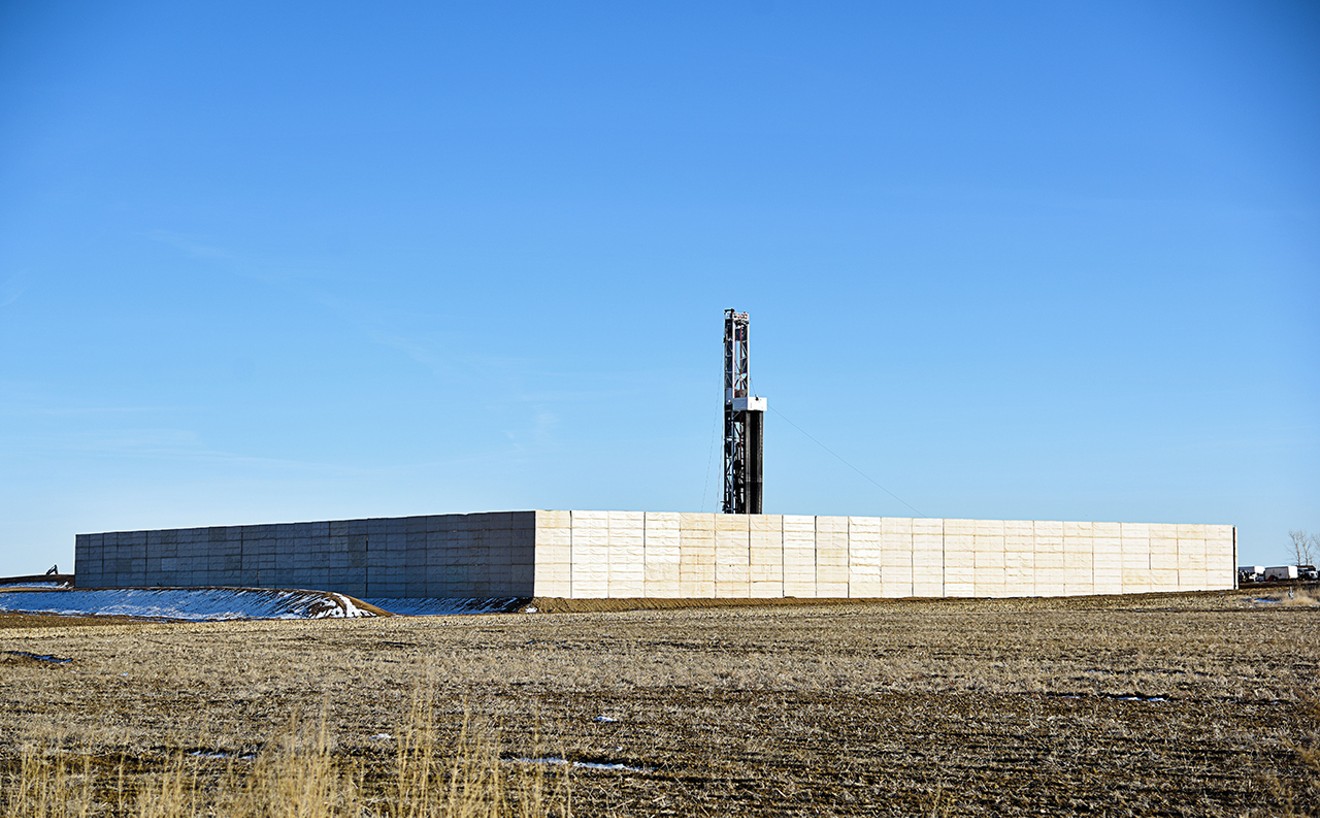 An oil and gas site in Broomfield. Anthony Camera
The oil and gas legislation enacted by Colorado Democrats earlier this year was supposed to end long-running battles over neighborhood fracking by strengthening health and safety protections for impacted residents. But a new lawsuit filed by community activists in Broomfield alleges that six months later, not much has changed.

"This kind of abusive behavior from the oil and gas industry is exactly what prompted Senate Bill 181," says Joe Salazar, director of anti-fracking group Colorado Rising and the attorney for the plaintiffs, a group of Broomfield residents known as the Wildgrass Oil and Gas Committee. "They continue to ask for drilling permits within residential areas, and go through this expedited process where they have never been denied permits. It just seems like it's business as usual."

The complaint against the Colorado Oil and Gas Conservation Commission, filed this week in Denver District Court, centers on a drilling permit application submitted by Extraction Oil and Gas, which asked the agency to approve a new horizontal well to be drilled from the Livingston Pad in north Broomfield. The site, which is located about 1,300 feet away from nearby homes, was approved by the COGCC last June, and drilling has occurred there throughout the year — but the latest permit to drill was submitted in July 2019.

"This was filed after SB 181 went into effect, and now we have to follow the guidelines of SB 181," says Salazar, who filed an objection to the application on behalf of Wildgrass residents shortly after it was submitted. But the lawsuit filed this week shows that regulators are interpreting the law somewhat differently.

"We are kind of in this awkward stage, shall we say," a COGCC hearing officer said during a pre-hearing conference on July 22, according to the complaint. "The Commission and the director have determined that the statute does not require a complete shutdown until all the regulations are retooled. So I'm working with old regulations and trying to superimpose the gloss of SB 181 — health, safety, welfare, that sort of thing — on it."

The commission's rulemaking process, through which SB 181's provisions will be fleshed out and implemented, began earlier this year and is expected to last well into 2020. Environmental activists have repeatedly called on the COGCC to halt all new permitting until rulemaking is complete, but agency officials have rejected those calls.

Under the new law, a list of conditions known as the Director's Objective Criteria allows the commission to "delay the final determination" on certain permits until the new rules required by SB 181 are in place. The proposed new well at the Livingston Pad meets several of those criteria, but it's not clear if or when such a delay would be imposed by regulators. The commission is expected to formally consider the application at its monthly hearing in November.

Activists argue that the uncertainty surrounding the new law and its implementation bolsters their case for a moratorium on new permits. In their lawsuit, plaintiffs ask the court to "stay permitting in this case and in all cases involving permitting of any drilling…until COGCC rulemaking is completed."

Megan Castle, a spokeswoman for the COGCC, confirmed that the agency had received the complaint, and added: "Regarding the claim that the Commission must cease all permitting until rules are promulgated, it has repeatedly been stated publicly that the Commission will continue to conduct its business under SB 19-181 while the Commission conducts rulemaking."

"The reason for pausing the permits is so that people's substantive due-process rights aren't violated," Salazar says. "It's very clear in the law that decision-makers can't move forward if they don't know how the law is supposed to be applied."
KEEP WESTWORD FREE... Since we started Westword, it has been defined as the free, independent voice of Denver, and we'd like to keep it that way. With local media under siege, it's more important than ever for us to rally support behind funding our local journalism. You can help by participating in our "I Support" program, allowing us to keep offering readers access to our incisive coverage of local news, food and culture with no paywalls.
Make a one-time donation today for as little as $1.