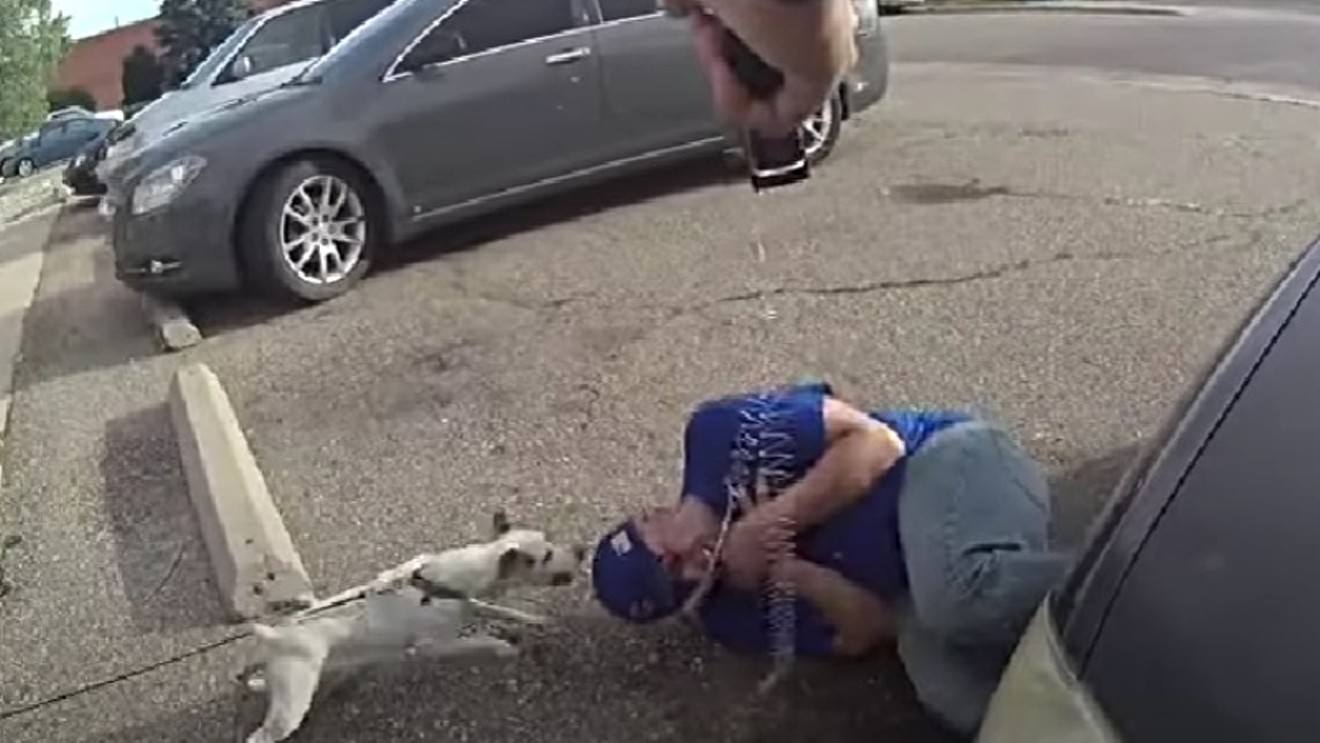 Now the LPD has authorized an independent probe prompted by another legal complaint — this one over a June 20, 2020, episode in which a man, Jon Siers, was tased, a girl was left bruised and battered, and a family dog was choked amid the investigation into a slap between teenagers in the parking lot of a Safeway grocery store.

The latest suit, like the two previous ones, is being pressed by attorney Sarah Schielke of The Life & Liberty Law Office on behalf of Siers and his daughter, a fourteen-year-old identified in the court document as S.S.

According to Schielke, S.S. slapped her eighteen-year-old boyfriend, Elijah Hall, after she found him with another female. In her summary of what happened afterward, Schielke says that officers "spent the day hunting for her, and then upon finding her at her home, attempted to arrest and handcuff her (handcuffs are, it turns out, not made for children), while violently slamming her into concrete repeatedly, causing her a concussion along with many scrapes and bruises."

Schielke points out that "while two of their officers did that to this small girl, another officer assaulted and tased her dad, before going to choke and kick the family’s little pet dog, Skippy. Then they jailed both dad and daughter. All over a child’s slap that happened several hours prior, that the boyfriend did not want to press charges for, and which he told police did not even hurt."

The defendants in the case are officers Matt Sychla, who tased Siers and allegedly choked and kicked Skippy, a Jack Russell terrier, as well as Jeremiah Wood and Evan Dunlap, who took S.S. into custody. Sychla is no longer a member of the department.

The video below, assembled by Schielke, combines video captured by body-worn cameras with on-screen graphics and additional material that attempts to place the incident in a broader context.
S.S. was accused of harassment, domestic violence, obstruction and resisting arrest. All charges were eventually dropped, but the Loveland Police Department's internal review of the bust concluded that the officers' actions were legally justified.

This conclusion no longer seems to be the final word. On June 15, the same day the lawsuit was filed, the City of Loveland issued a news release about the Siers matter, noting that a new review would be launched. Chosen to conduct it was Jensen Hughes, described as "a national law enforcement and public-safety consulting firm that also conducted an independent assessment of LPD in 2021."

More than a month earlier, the release notes, "an attorney representing the family involved in the incident made a request to the city to settle alleged claims related to this case and provided the city with a four-day time frame to pay the amount requested, and if not, a video prepared by the attorney would be released for public viewing. The city did not pay the demanded amount and the attorney subsequently released an edited version of the body-camera video to the public."

Loveland countered with a video of its own, showing Sychla's interaction with Siers, including his explanation that he'd used force because "he wasn't sure what the father's intentions were."

Here's that clip:
In a statement regarding the new investigation, Loveland City Manager Steve Adams says: "The incidents were initially reviewed and deemed appropriate at the time of the event, but the city is taking a second outside look at the incident in our efforts to ensure we are policing in a respectful and proper manner. As we move forward on our accountability efforts launched in 2021, best practices in law enforcement will be maintained and we are committed to accountability if those standards are not upheld."

Adams adds: "I appreciate the difficult, challenging, and often dangerous roles that LPD officers undertake to keep our community safe, and I want to express my gratitude to the men and women of LPD for taking on this important work and for continuing in our larger efforts to improve community policing to best serve our community."

Click to read Jon Siers v. Officer Matt Sychla, et al.
KEEP WESTWORD FREE... Since we started Westword, it has been defined as the free, independent voice of Denver, and we'd like to keep it that way. With local media under siege, it's more important than ever for us to rally support behind funding our local journalism. You can help by participating in our "I Support" program, allowing us to keep offering readers access to our incisive coverage of local news, food and culture with no paywalls.
Make a one-time donation today for as little as $1.