Is Loveland Police Department Running a DUI Scheme for "Money and Sport"? 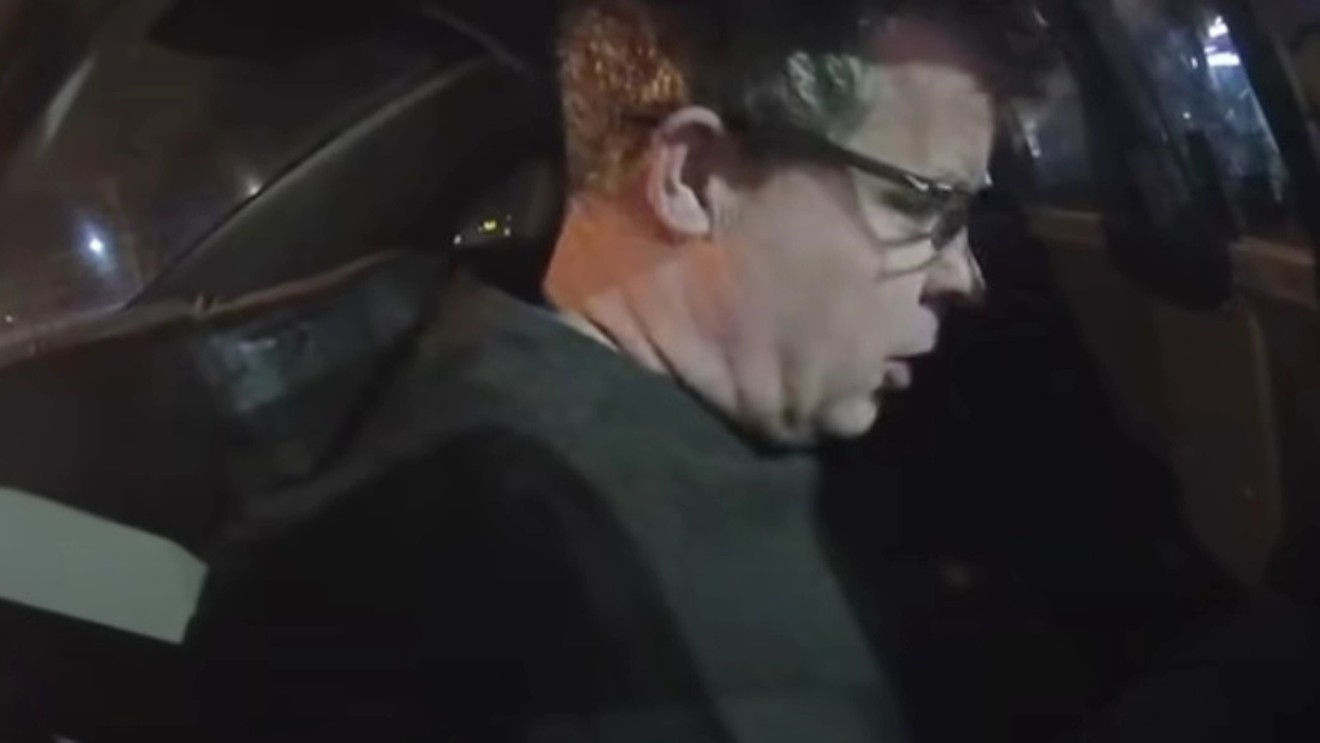 A screen capture of Harris Elias during a DUI arrest that spawned a lawsuit. Loveland Police Department via The Life & Liberty Law Office
The Aurora Police Department, which has been in spin mode following the firing of reform-minded police chief Vanessa Wilson, isn't the only local law enforcement agency facing public-relations challenges.

The Loveland Police Department was hit with many negative headlines related to the rough arrest of Karen Garner, a 73-year-old suffering from dementia who's only five feet tall and weighs eighty pounds — an incident that generated a lawsuit settled last September for $3 million. And on March 30, attorney Sarah Schielke of The Life & Liberty Law Office, which represented Garner and her family, filed another complaint against the LPD.

Her client this time around is Harris Elias, a general contractor and father of three who was arrested for driving under the influence just over two years ago despite being completely unimpaired. Even after a Breathalyzer showed he hadn't been imbibing, he was dragged to the police station and forced to take a blood test — and while he passed that, too, resulting in the charge against him being dismissed, the process dragged out for two months, and the arrest remains on his record. The latter creates a lifetime burden for Elias, since he's also a pilot and must report and explain every arrest in order to be medically cleared to fly.

Schielke contends that what happened to Elias wasn't an isolated incident. According to her summary of the lawsuit, which names Officer William Gates, who pulled Elias over, as well as Sergeant Antolina Hill and the City of Loveland, the LPD has a "pattern and practice of wrongfully arresting innocent people...for DUI money and sport." The complaint "reflects just the beginning of an investigation into the rotten culture of competition and one-ups-manship that permeates the Loveland Police Department and which has left a wake of victims just like Mr. Elias — innocent law-abiding people (including Lyft drivers, veterans, the disabled, the elderly) whose lives were wrecked by wrongful and reckless DUI arrests by LPD officers," she adds. "On extremely incomplete records, [we have] identified over twenty wrongful DUI arrests in a two-year period between just two officers. This is only the tip of the iceberg."

The Loveland Police Department isn't commenting on specific DUI cases, including the one involving Elias. But a response to the lawsuit provided to Westword states that even though some of the reports cited in the document are inaccurate, the agency has launched "an independent, expert professional review of our DUI enforcement program." 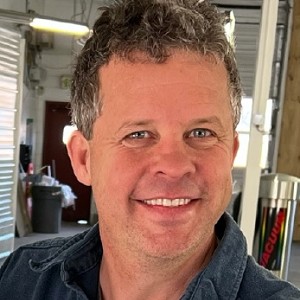 A portrait of Harris Elias.
The Life & Liberty Law Office
Here's how Schielke describes what happened on January 4, 2020:

"Harris was driving home from dinner with his girlfriend in Fort Collins," she says. "He'd drank no alcohol, consumed no drugs, taken no medication. But he wasn't super-familiar with the area — he'd just moved here — and thought he'd missed an intersection. So he slowed down to check the street sign, and that's when he was seen by Officer Gates, who was just driving around with the singular objective of getting more DUI arrests for the department. He was part of a task force of agencies up here that would apply for grant funding for their departments, and money would be allocated based on DUI arrests."

Gates "pulled Harris over pretty aggressively and started accusing him of drinking," Schielke goes on. "That made Harris very wary of him, because the officer was saying, 'You smell like alcohol' and all these other things he knew couldn't be true. So Harris said, 'I'm not going to answer any questions,' and Gates arrested him for it, after only about sixty seconds total. He gave him a choice of a breath test or a blood test back at the station, and Harris chose a breath test and scored all zeroes. But rather than letting him go or apologizing, Gates said, 'Now you have to do a blood test.'"

Why? Schiekle theorizes that the police "figure at least half the adult population uses prescription medication, or uses marijuana, and if they give them a blood test, they'll find something to justify the arrest" — although that wasn't the case with Elias.

Here's a video compilation of Elias's arrest, as captured by Gates's body-worn camera:
The experience of waiting eight weeks for blood-test results "was completely terrifying, stressful and intense for Harris, because obviously this was an unscrupulous officer who was hellbent on fishing until he had something to charge him with," Schielke continues. "So he came to me and said he wanted to sue, because he didn't want Officer Gates to do this to anyone else."

Turns out that Schielke was familiar with Gates. "He's been on my radar for years as this outrageously prolific DUI-arresting cop who treats people like he treated Harris — by just unloading accusations on them and then making them take a blood test even if they pass the Breathalyzer," she says. Indeed, she says, other Loveland-area residents had complained to her about Gates in the past: "He'd accuse them of using alcohol, and they'd blow zeroes, but they'd used marijuana the week before, so it wasn't a perfectly clean blood test."

When she took on the Loveland Police Department over the issue, "I wanted clean across the boards, but then to reveal within the lawsuit other cases — the practically countless occasions where people came back at a .01 or .02," she says, citing blood-alcohol-content readings that were well below the legal standard for intoxication of .08, showing that "they weren't impaired, but they charged them anyway."

Drunk driving "is a horrific blight on our society that needs to be removed, and we need to fight it with everything we have," Schielke emphasizes. "But the ends don't justify the means when you're wrecking the lives of innocent people in pursuit of that. Actual drunk drivers destroy lives, but because of the stigma we impose on people when they're charged with DUI, the harm inflicted on innocent people charged with DUI is off the charts, and it endangers our ability to get actual drunk drivers off the road."

Loveland Police Chief Bob Ticer, who was in charge of the department during the period of time when Elias was arrested, recently left the post to take a similar job in Prescott Valley, Arizona. Deputy Police Chief Eric Stewart is heading the department on an interim basis while a search for a long-term replacement is underway. The statement from the Loveland Police Department about the Elias lawsuit reads:


Recently, there has been some criticism of our department’s handling of impaired driving cases. The critics are members of the defense bar who represent drivers who were charged and some drivers who ultimately passed blood tests that showed they did not have alcohol in their system.

While we cannot comment on specific cases, especially those involving civil litigation, we want to make it clear to the public that we are open and transparent in our work. Our department recently announced that the city will undertake an independent, expert professional review of our DUI enforcement program.

When questions are raised, it is our practice to look internally first, but because recent litigation shut down our internal affairs investigation into an incident, the department announced...that it will engage a professional review of our policies and procedures involving DUI enforcement. As stated previously, this will include policies and procedures, overall strategy as well as status, outcomes and claims of current and recent enforcement efforts.

It is important to stress that this process is not an acknowledgement as to the validity or accuracy of the specific complaints made by certain individuals about our DUI program. In fact, we already know that some of the allegations being made are inaccurate and do not describe the professionalism and respect shown by our officers to the individual involved. We ask the public to keep an open mind as we deal with claims that will ultimately be addressed in a court of law.

This is too important an issue for the health and safety of our community to ignore or to wait for the outcome of any litigation. As this department has demonstrated in the past, we are not afraid to have outside experts look at our operations to suggest changes where they may be needed or confirm where we continue to excel.


Click to read Harris Elias v. City of Loveland, et al.
KEEP WESTWORD FREE... Since we started Westword, it has been defined as the free, independent voice of Denver, and we'd like to keep it that way. With local media under siege, it's more important than ever for us to rally support behind funding our local journalism. You can help by participating in our "I Support" program, allowing us to keep offering readers access to our incisive coverage of local news, food and culture with no paywalls.
Make a one-time donation today for as little as $1.