Mailing Marijuana Out of Colorado: Are Your Odds of Getting Caught Going Up? 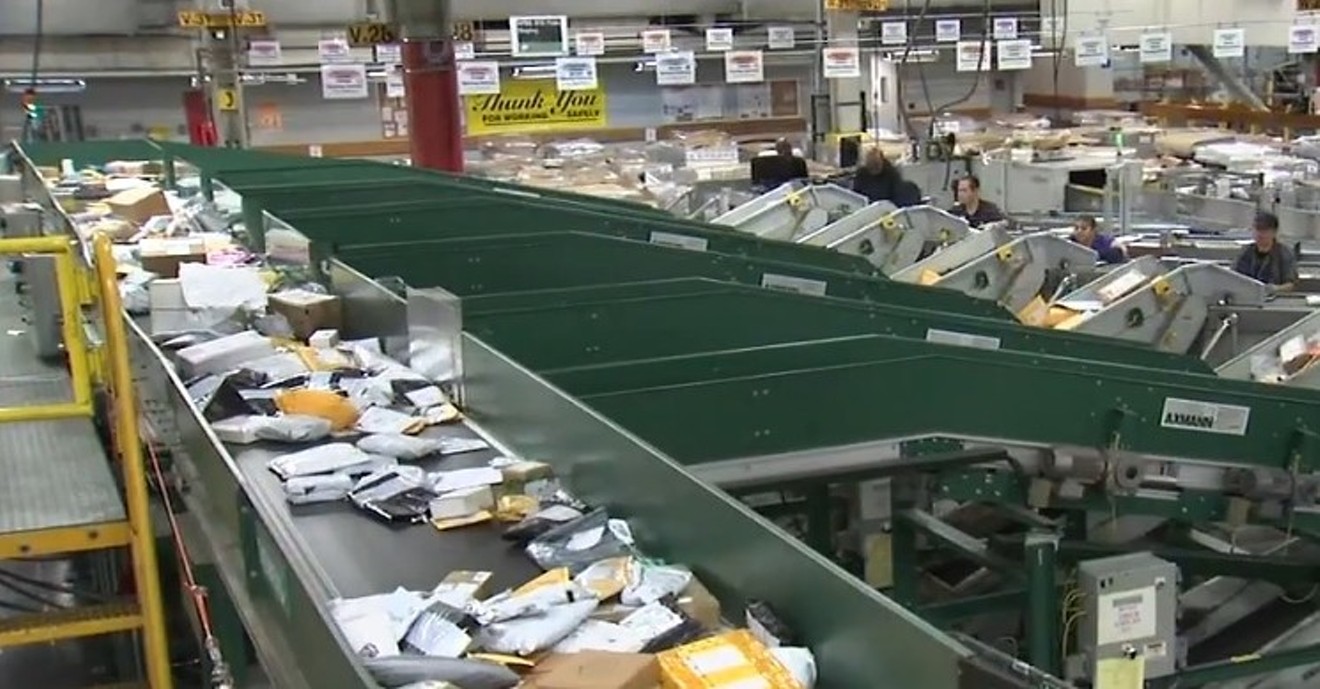 A mail processing center in Illinois that may regularly receive packages of marijuana from Colorado, according to a 2015 ABC7 Chicago report. ABC7 Chicago file photo
In "Mailing Marijuana Out of Colorado: How Likely Are You to Get Caught?," published circa November 2015, the Rocky Mountain High Intensity Drug Trafficking Area's Tom Gorman estimated that 90 percent of illegally shipped cannabis packages weren't being found by postal inspectors.

More than two years later, figures from a pair of recent analyses maintain that hundreds more pot-packed parcels are being intercepted than in previous years, even as our Ask a Stoner columnist suggests that successfully mailing pot edibles out of state is still a snap if proper precautions are taken.

Our 2015 piece drew from an ABC7 Chicago piece with this screaming headline: "MAILING MARIJUANA: OFFICIALS REPORT SPIKE IN POT-LADEN PACKAGES." The report included an interview with Gorman and figures from one of the RMHIDTA's regular sky-is-falling jeremiads against marijuana legalization.

Gorman has acknowledged in this space that some of the data assembled by the RMHIDTA is opinion-based, meaning it may not pass muster in a scientific survey. But that hasn't stopped plenty of news organizations and anti-pot activists from using it. 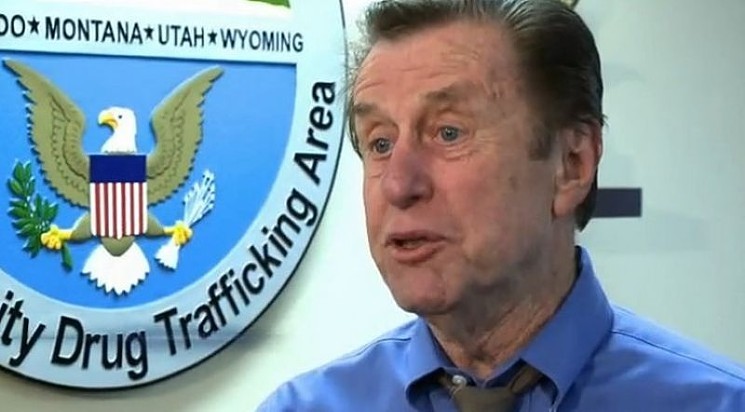 The Rocky Mountain High Intensity Drug Trafficking Area's Tom Gorman.
File photo
At the time of its 2015 report, ABC7 Chicago noted that the U.S. Postal Service was handling more than 155 billion pieces of mail per annum, with a billion-plus going through Chicago.

Of that total, just shy of 8,000 packages containing marijuana were seized in 2014; they cumulatively contained approximately 40,000 pounds of cannabis or cannabis-related products.

How many of them originated in Colorado? ABC7 didn't have those figures, but it did quote RMHIDTA info suggesting that "the amount of intercepted mail containing Colorado marijuana destined for other states has increased over 2,000 times from 2010-2014."

""The Legalization of Marijuana: The Impact, Volume 5, October 2017," the latest RMHIDTA salvo, maintains that the problem has only worsened since then. According to its figures, sourced to the United States Postal Inspection Service, authorities seized 854 parcels mailed from Colorado to another state in 2016, the most recent year for which stats were available. That represents nearly a 32 percent increase over 2015, when 581 pot parcels were seized.

Here's a graphic illustrating the rise, from the RMHIDTA document. 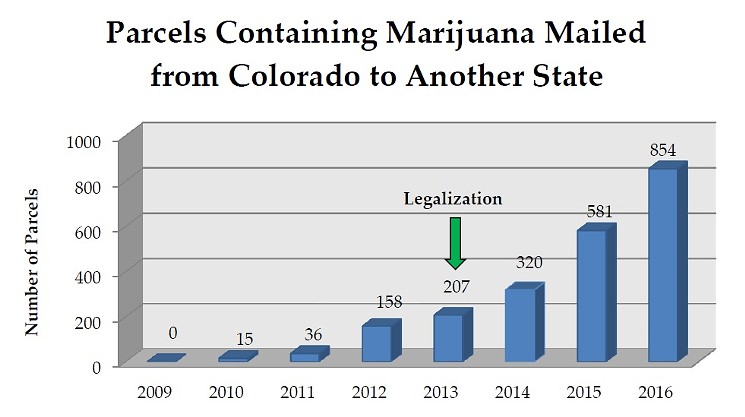 Rocky Mountain High Intensity Drug Trafficking Area
These figures are similar to ones obtained by Denver7 for a January report about mailing marijuana. The station noted that the U.S. postal inspectors took more than a year to respond to its Freedom of Information Act request for data. The digits it finally received are higher than the RMHIDTA's for 2012, 2013 and 2014, but a bit lower in 2015 and 2016.

Here are those numbers:

The 2016 totals for Colorado in both surveys represent less than 10 percent of the total national seizures for 2016 by U.S. News and World Report last year, when just shy of 10,000 marijuana-laden items were grabbed by postal inspectors.

Are the percentages of marijuana parcels seized rising? Since we don't know how many of these packages are being sent, it's impossible to tell. But Ask a Stoner columnist Herbert Fuego believes that using the U.S. mail to ship pot edibles is generally no big deal. The following is an excerpt from a response to a reader back in December, complete with original links:


Smuggling edibles through the airport or mailing them isn’t very hard if done in small amounts, so it comes down to when you want them to arrive and what you’re more comfortable with. Much to the chagrin of the United States Postal Service, TSA and some square readers, I’ve already told a couple of Stoner inquisitors how easy it is to send edibles through the mail or get them through TSA (which generally doesn’t give a shit), and you can find both guides on westword.com. Mailing is very easy, and probably the safer option if you have a willing participant to receive it. Just don’t use your real return address — and don’t be lazy about the packaging: Make it discreet.

If you don't, there are plenty of folks at the postal service eager to make you pay.