Sh*tstorm After Study Finds No Causal Link Between Marijuana, Homelessness 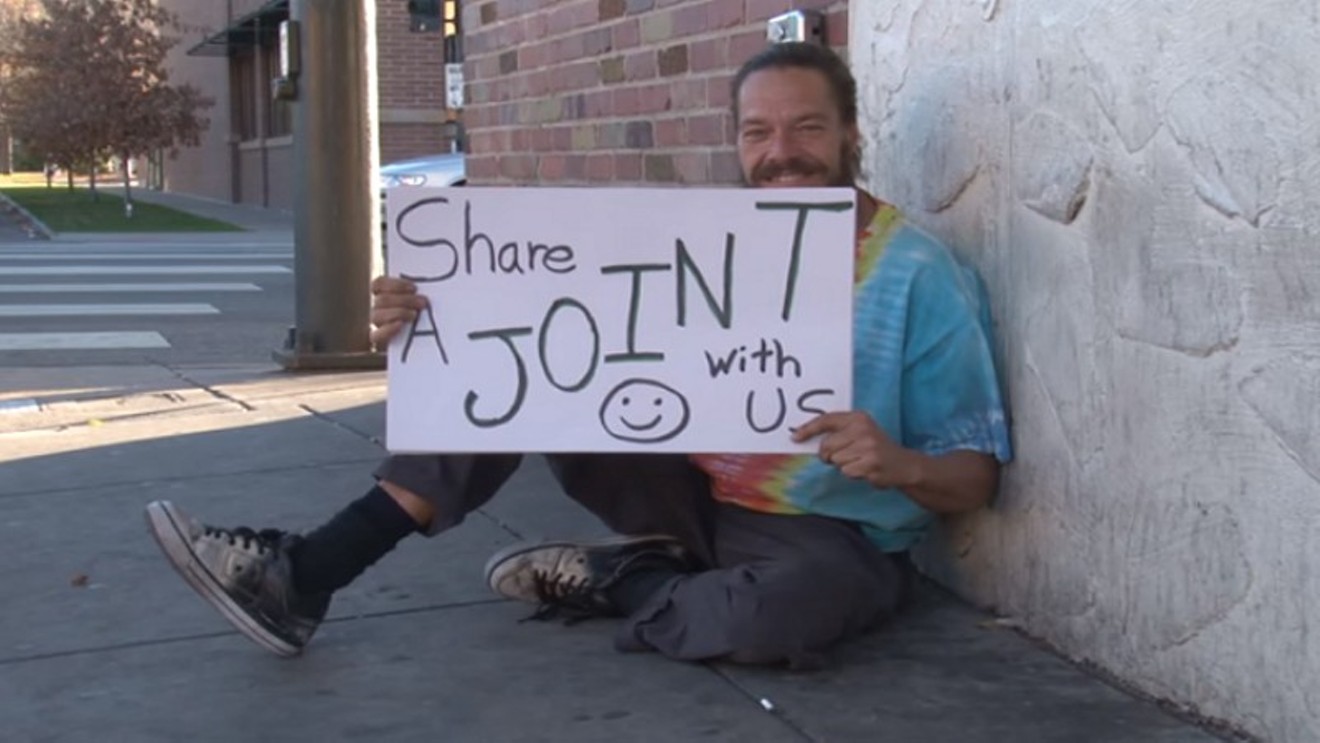 YouTube file photo
A new study about the impact of marijuana on Pueblo County maintains that there's no evidence linking cannabis legalization and the increase of homelessness in the area. This contention has been ripped by Pueblo Police Chief Troy Davenport, who strongly believes such a connection exists, as well as the authors of a Pueblo Chieftain editorial that dismissed these findings as "junk science." But one of the academics behind the document suggests that such critics would rather believe the sort of nonsense churned out by prohibitionists for decades than look at actual facts.

"There are people in Pueblo and around the world, actually, who are anti-cannabis, and they're determined to remain so in spite of the many lies associated with the whole reefer-madness phenomenon that has been debunked," says Tim McGettigan, a sociology professor at Colorado State University Pueblo and one of the main forces behind the Institute of Cannabis Research, an organization authorized by the state legislature in 2016. "These people operate under a type of superstitious thinking, and I don't know if any amount of science, truth and reason is going to change their thinking."

ICR's "Pueblo County Impact Study" is accessible below in its entirety. However, an excerpt from the section on homelessness reads: "We found no evidence that poverty has either increased or decreased in Pueblo as a result of cannabis legalization. ... Apart from anecdotal reports, we did not find definitive evidence that links increased homelessness to legal cannabis."

McGettigan is no stranger to controversy: In 2014, he was accused of violating CSU Pueblo communication policy and temporarily locked out of the computer system after comparing job cuts at the school to the Ludlow Massacre. Given this experience, he's not surprised that the report's take on homelessness has generated pushback.

"There have been a lot of premature conclusions drawn in the media in Colorado with regard to the question of whether there's a relationship between cannabis and homelessness," he allows. "And we have seen upticks in homelessness in Colorado. But whether one has caused the other is a very different matter."

CSU Pueblo professor Tim McGettigan.
Amazon.com
In Pueblo County, McGettigan acknowledges that the increase in homelessness has been "enormous" during recent years. But, he says, "I looked and looked and looked, and I did not find any direct, causal relationships that the powers-that-be and journalists in Pueblo were finding between cannabis and homelessness. If such a connection existed, surely there would be some evidence of it. But I ransacked all the statistics available as much as I could, and I didn't find a causal connection."

In contrast, McGettigan discovered that plenty of other contributors to homelessness were abundant in Pueblo.

"Ever since the steel mill shutdowns, there have been dire difficulties in Pueblo with ongoing poverty," he says. "And my very good friend and colleague Don Burnes at the University of Denver has done some deeply troubling research for his book Ending Homelessness that shows the effects that can have. What he and his co-researchers found is that if you break up the population into five different parts, or quintiles, the people who are in the bottom quintile — the 20 percent of the population that's the most financially challenged — spend on average 87 percent of their annual income keeping a roof over their head."

Ideally, McGettigan continues, "people should not spend more than a third of their annual income on housing because there are so many other expenses for transportation, clothing, food, medicine, on and on. But for those in the poorest quintile, an unexpected expense of $400 or more can be the difference between them staying in their home and ending up on the street."

Against this backdrop, the study cites reports that Black Hills Energy, a major utility in Pueblo, cut off the electricity at more than 7,000 homes during 2016 alone — and while the company has said that most customers were eventually able to cover the debt and other pricey fees related to it and get back into their homes, plenty of them had to rely on public assistance in the interim, severely stressing social-service agencies along the way.

The study details how much of an impact economic factors like these had on homelessness in Pueblo County. But McGettigan and the others who worked on the report were unable to find much beyond random observations tying legal pot to the homelessness boost — which makes the attacks on the work that much more frustrating for him.

Thinkstock file photo
"Certainly, scientists will listen to people who make assertions that seem in some way to be plausible," he stresses. "But too many people are like, 'Look, there's a homeless person over there, and I smell ganja in the air. I draw the conclusion that this homeless person and the ganja are related — and I don't have to think anymore.' And scientists don't approach situations like that. We take into consideration whatever folk wisdom may exist, but what we care about more than anything else is truth. And so assumptions people make about the relationships between things, while interesting and instructive, are not always truthful."

Meanwhile, he continues, "People have been looking for ways to vilify cannabis for a long time. For much of the twentieth century, they insisted that not only was cannabis dangerous, but it was imbued with some sort of supernatural, evil spirit — a force that moves among us like Satan does and causes people to slip over to the dark side of the force. But science tells us otherwise."

To further spread this last message, McGettigan is organizing the second annual Institute of Cannabis Research Conference, scheduled for April 26 through 28 at CSU Pueblo; get more details here. Among the first items on the agenda is what he refers to as "a community appreciation night, where we'll have an open forum to talk about cannabis and homelessness. It's free and open to the public, and we hope everyone will take the opportunity to come to the university and learn more about what we're doing at the institute and become more fully engaged in evolving scientific debates surrounding cannabis going forward."