The Tweet That Cost a Media Career: Why I Did What I Did 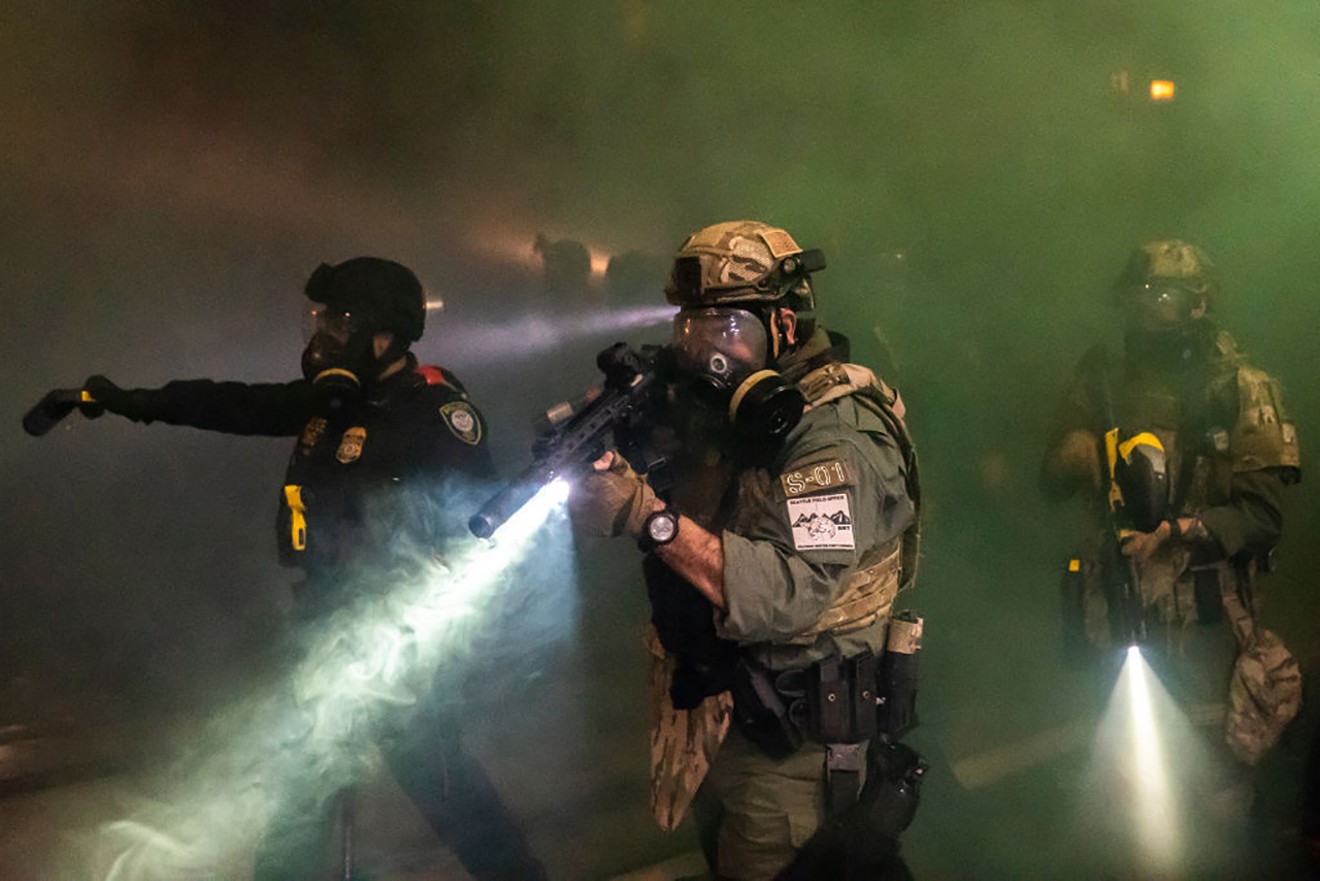 Federal troops engage Portland demonstrators. Getty Image/Nathan Howard
Better to be a good American than a good employee. Distilled to its most elemental expression, that is the reason why I blew up a 35-year career in broadcast media to add my voice to the alarms sounding about the current state of our Republic.

My former employer did the right thing in firing me. They set the rules, standards of conduct and guidelines for content. Break them and you pay. I did and I did.

To anyone gleefully saying that I got what I deserved, I agree, so let’s move on...back to our imperiled democracy.

At a public event the Saturday after the 2016 election, a colleague asked me what I thought of the result of the presidential race. “Racism and sexism are alive and well in the United States of America,” I responded.

After seeing our 45th president’s rise to power fueled by the “birther” movement and his callous attitudes toward women self-described (one might say “confessed”) in the Access Hollywood tape, there is no other conclusion a reasonable person could reach.

The birther movement was based on fiction. However, that did not stop Donald Trump from repeatedly, over the course of several years, questioning Barack Obama’s legitimacy as president. When the entire fabrication unraveled, Trump simply turned everyone’s attention to the next shiny object of distraction and we obediently went along for one of what would turn out to be many excursions down the rabbit hole.

As for the Access Hollywood recording, you have a man either bragging about sexual assault or lying to Billy Bush about committing sexual assault; there’s no third choice. It’s inconceivable that a person with those attitudes and (again, self-confessed) behaviors would be hired for any job in a position of authority at any organization, yet here we are.

For pointing these facts out, I’ve been called — well, I’ve been called a lot of things, the gist of which comes down to “liberal.” Fact is, I’ve been a registered Republican, Democrat and, for several years (including now), Unaffiliated. As a fiscal conservative who believes that everyone in the United States should have equal access under the law, there is not a tidy cubbyhole in which I can store my philosophies.

Regardless of how you label yourself politically, it should be horrifying to see the relentless assault on truth that engages most of our current president’s time and energy.

I’ve never seen myself as a journalist. My training is in psychology and political science, and then late in my college career, I cultivated my fascination with meteorology. I am a scientist who happened to be engaged in mass media, like Bill Nye without the bow tie.

As such, I observed journalists for a long, long time. The wealth of close contact that I enjoyed brought me to the conclusion that journalists do not set out to lie, twist the truth or advance an agenda. The people with whom I worked at several media outlets tirelessly sought to achieve accuracy even when interview subjects were hiding the truth.

Balance in storytelling was also the topic of long conversations in editorial meetings...to be sure that all relevant, varied points of view in a story were presented in a restrained, respectful way. In other words, playing by the rules of a polite society.

The mistake that journalists have made is to assume that our current president and his ilk have any intention of playing by those same rules. 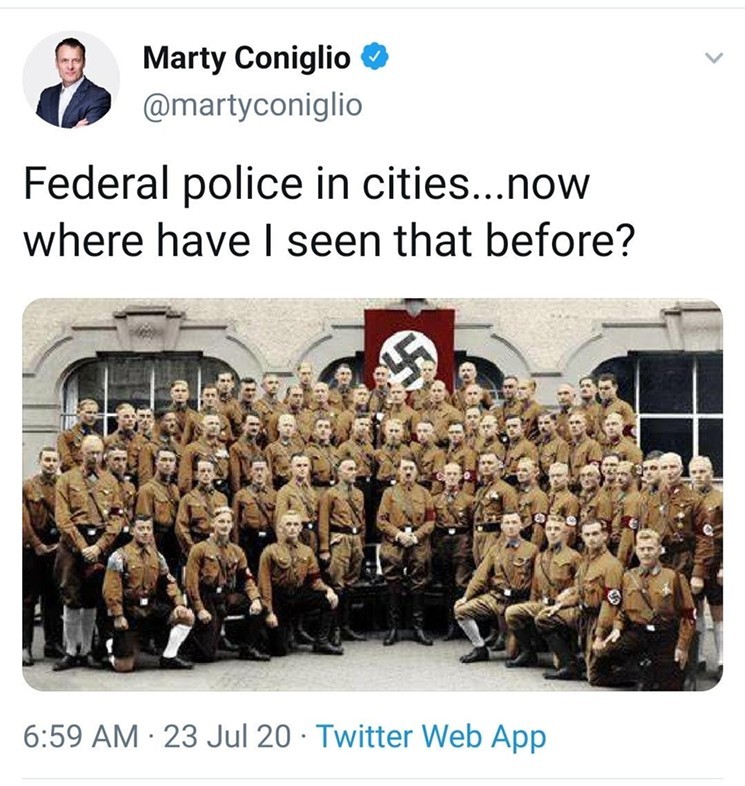 courtesy Marty Coniglio
By repeatedly labeling the free press “THE ENEMY OF THE PEOPLE!” (yep, he does it in all caps) the 45th President of the United States declares open warfare on the First Amendment to the Constitution. Casting journalists in this light allows him to be the sole arbiter of “truth,” a scheme aided and abetted daily by talk radio and FoxNews propagandists.

This was all working pretty well until coronavirus came along. The virus doesn’t care what you believe, it doesn’t care who you vote for, it doesn’t care where you live. Donald Trump came up against something he couldn’t spin. Oh, he tried, lord, how he tried. How many times have we heard it would just “one day magically disappear”? There’s a public-health policy for you.

The United States has the most deaths attributed to COVID-19 in the world, the most coronavirus cases in the world, and much of that world has banned travel from the U.S. to their respective countries. After proclaiming “We’re doing great,” Trump has now tested positive. George Orwell could not have written this situation better.

It is this all-out war on basic truth that I find so appalling. As I said, I am a scientist, and though scientists get things wrong due to a lack of knowledge or insufficient data, we do not get things wrong in a deliberate attempt to call attention away from our own failings.

Which leads me to why I did it. Why I posted what was described as an “incendiary” tweet that ended my media career.

I watched masked, unidentified men in camouflage grabbing people off of the streets of Portland without ever identifying themselves or the authority under which they were operating.

I watched the president say that he would deploy similar forces to cities and states governed by his political rivals. This would in essence be a national police force used for “law and order” at the behest of one political party over the objections of local elected officials. Sorry, folks: That ain’t conservative, small government no matter how you spin it. By the way, what jobs do those masked guys in camo normally do? Where are they from? Why did they need camo? Has anyone missed them at their regular jobs?

Finally, I watched U.S. Navy veteran and Naval Academy graduate Chris David being threatened with semi-automatic weapons, beaten with batons and pepper-sprayed in the face. Why? Because he dared to challenge those unidentified men by saying: “Remember your oath to the Constitution.” After that assault, I did not hear any outrage from the “Respect our veterans” crowd. But I was outraged.

My father fought the fascist Germans in North Africa and the fascist Italians in Italy during World War II. Three of my brothers served in the Army. My late brother Tim was an Army Airborne Ranger and retired as a major after a twenty-year career. So don’t you dare try to lecture me about respecting our veterans.

I ask everyone who reads this to think about the ideal of what America was intended to be, the promise that America has the potential to afford to all of us and, while recognizing that we have yet to fully realize the potential of America, realize that it is worth sacrifice to aspire to the lofty goals our Founding Fathers set for us.

Better to be a good American than a good employee.

Marty Coniglio left 9News in July, the day after he compared federal troops in U.S. cities to Nazis in a tweet.
click to enlarge

Marty Coniglio, moving on.
9News
KEEP WESTWORD FREE... Since we started Westword, it has been defined as the free, independent voice of Denver, and we'd like to keep it that way. With local media under siege, it's more important than ever for us to rally support behind funding our local journalism. You can help by participating in our "I Support" program, allowing us to keep offering readers access to our incisive coverage of local news, food and culture with no paywalls.
Make a one-time donation today for as little as $1.

Meteorologist, musician, mutt lover, airplane pilot, man of the outdoors, Marty Coniglio has been a fixture in Denver media since the 1980s. One of very few news/weather anchors to work at the ABC, NBC and CBS affiliates in Denver, Marty has covered every major weather event in Colorado for a generation. He is currently focusing on expert weather analysis for legal cases and independent media projects.
Contact: Marty Coniglio