My Night as Toasty, Mascot of the Rocky Mountain Vibes

Toasty, the Rocky Mountain Vibes mascot. Haley Ledbetter
On Friday, September 9, Toasty, "the best mascot in minor league baseball," cruised around the edge of the baseball diamond in a pre-game ceremony before the penultimate game of the Rocky Mountain Vibes in Colorado Springs. Toasty pumped up the crowd by waving his arms in the air and flapping his graham cracker sides.

The person usually found inside the s'mores suit, seventeen-year-old Erich Salario, was off to the side, dressed in a Vibes employee uniform instead, as he guided the team's mascot around. And I, a thirty-year-old man sweating his ass off, was acting as Toasty, an anthropomorphic s'more with great vibes.

In late August, I'd read an article in The Athletic by Rob Biertempfel, the publication's Pittsburgh Pirates beat writer, describing his night as Al Tuna, the mascot for the Altoona Curve Double-A baseball team. It made me want to take on a similar assignment — not playing the Colorado Rockies' overweight Dinger, but perhaps with the Rocky Mountain Vibes of the Pioneer League, a partner of Major League Baseball. The Vibes marketing team agreed to the deal, signing me up for the Friday Night Fireworks game at UCHealth Park.

While I do love mascots — they give kids something to look for and interact with at sporting events, and adults like them, too — my own experience as a mascot was limited. I had worked one homecoming and one halftime show in a pelican mascot suit in high school over a decade ago. Other than that, I was green.

When I got to the UCHealth Park stadium, Salario, who had just begun his senior year at Doherty High School, was there to greet me.

"It’s really about trying to make people entertained, so it’s a lot of fun in that sense," Salario said, speaking from a couch in a back room where he gets dressed as Toasty before games. "And it’s also really rewarding to see kids' faces when they really want to hug you or high-five. It’s super awesome to see that look." 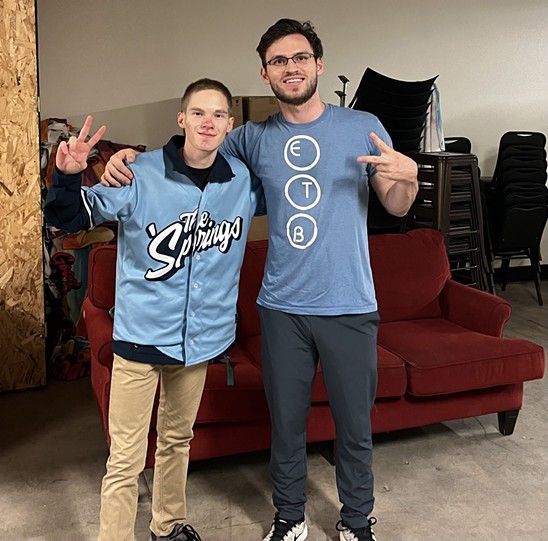 Erich Salario, who normally portrays Toasty, was the MVP of the night, helping me survive as an anthropomorphic s'more.
Thomas Mitchell
Salario had been sporting the Toasty costume since the end of the 2021 season. His brother, now a cop for the local police department, had previously served as Sox the Fox, the mascot for the Colorado Springs Sky Sox. Mascot work was in his blood.

"Since I had kind of grown up around this place, I know what the people here were like, so I kind of wanted to continue that and make my own name here," said Salario, who plans to enlist in the U.S. Army after finishing high school.

Later, the owner of the Sky Sox, David G. Elmore, moved the team to San Antonio, where the Sky Sox became the San Antonio Missions. And Elmore then moved the Helena Brewers, a minor-league team associated with the Milwaukee Brewers, to Colorado Springs, where it would compete under a new name.

That November, the franchise called an audible and announced that the team would be called the Rocky Mountain Vibes, an homage to the good times people have spending time outdoors in Colorado. And with that announcement, fans got to see the team's branding for the first time: a flaming stick that spelled Vibes and a flaming s'more with sunglasses named Toasty, who looked a bit like Guy Fieri.

"Toasty was born a healthy s'more on Monday, November 19, 2018, in beautiful Colorado Springs, Colorado," reads the Meet the Mascot page of the Vibes website. "Toasty was born big for a s'more, at 71 inches, 284 pounds and 9 ounces. A proud Colorado Springs native, Toasty enjoys spending his free time watching baseball, hiking Pikes Peak and Garden of the Gods with his best friend Sox the Fox, and just going with the vibe."

"They really full sent that, for sure," says Kaylee Goodell, director of marketing for the Vibes. "The s’more is just fun. Campfires. It just really rounds out the whole lifestyle of Colorado. It’s a vibe."

Goodell first heard about the Vibes branding when she was interning for the New Orleans Baby Cakes, a minor-league baseball team that had one of the creepiest baby mascots of all time. "My friends and I were interns there, and we all were like, 'We want to work there. That’s so cool and so fun,'" Goodell says.

Now 26, Goodell was already living in Colorado when she landed a corporate sales job with the Vibes earlier this year; this summer, she rose through the ranks to become director of marketing.

"It’s great. It’s all hands on deck in the minor-league system. Every second of my day is different," says Goodell, noting that she'll be helping the grounds crew one minute and working on marketing the next.

The Vibes played their first season in 2019. In 2021, a change in minor-league baseball led to the Pioneer League becoming an independent league, and as a result, the Vibes are no longer associated with the Brewers or any specific MLB team. Instead, they have a partnership with the Acereros de Monclova of the Mexican Baseball League, and many of the Vibes players also compete in Mexico.

But while the raw talent of many of the team's young players is an obvious selling point, the most lucrative aspect of the franchise is Toasty.

"We’re in the top ten for brands," Goodell says of the Vibes hats that feature Toasty. That's not the top ten of just the Pioneer League, but all of minor-league baseball. Vibes merchandise sells well online in this country and internationally. "That’s really where the franchise gets blown up," says Goodell.

So I had some big shoes to fill — both literally and figuratively.
click to enlarge 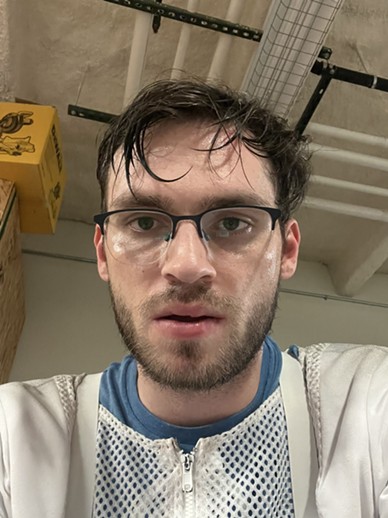 I was sweating my ass off inside the Toasty suit.
Conor McCormick-Cavanagh

Salario helped me get into the Toasty suit, with its gigantic red feet, padded pants that made my calves look especially muscular, and the head and torso that are all marshmallow, graham crackers and flame. Although Toasty has sunglasses on his marshmallow head, his wearer actually looks out of a metal grate at the front of the flame. The costume cost $18,000 and was crafted by California-based Custom Characters, which has made outfits for the Walt Disney Company, Universal Studios and Nickelodeon.

All of the players gave me knuckles or hands for pounds and high-fives. "Toast," they'd say or, "What's up, Toast?" I felt like the cool kid at the party.

After that, I ran around the field before my introduction as "the best mascot in minor-league baseball," congratulating some fans who'd thrown out the first pitches. I made sure to flap my graham cracker sides when they did, since I couldn't get my arms around the suit to actually clap.

All of a sudden, thunder crackled through the sky, and the Vibes players and Grand Junction Rockies were told by the umpires that the game would be delayed until the stormy weather had passed through. Salario and I retreated inside the stadium's back room, where I was able to take off the marshmallow. I was already sweating profusely, even though it wasn't that hot out, and my shoulders were tired. But I knew I had to push on.

When the game finally commenced, Salario had me shuffling around for various activities. There was the marshmallow toss between two kids, and I cheered them on, flapping my graham cracker sides. I also walked the concourse, posing with fans young and old. 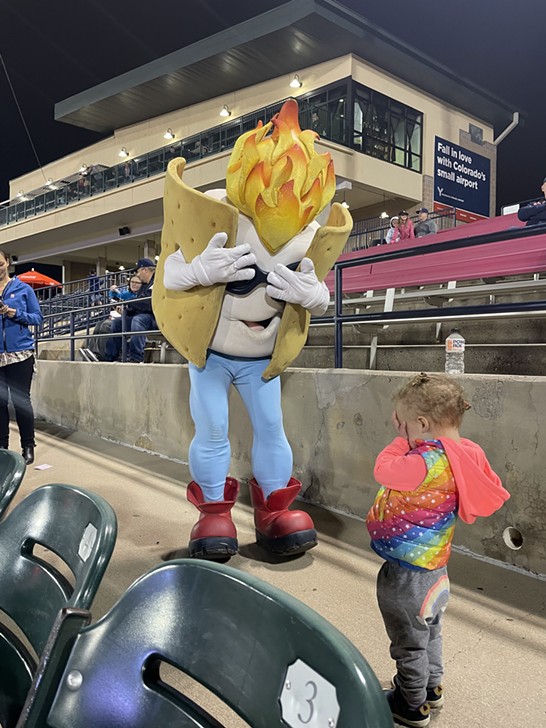 Toasty likes to play classic games like peek-a-boo.
Haley Ledbetter
Pretty much everyone wanted to have their photo taken with Toasty, smiling, laughing and high-fiving me. I had to keep telling myself that these fans didn't love me, they loved Toasty, the marshmallow man with the best vibes. Still, it was enjoyable making people so happy.

Most fans were on their best behavior. Occasionally, though, a kid would whack Toasty's torso and Salario would have to shoo him away, saying "Toasty doesn't like that." But other kids reacted to Toasty like they were seeing a good friend for the first time in a while.

"Toasty, you remember me, right?" kids would ask, to which I'd nod the entire marshmallow affirmatively. "I knew he remembered me!" one shouted.

Salario also took me up to the banquet hall, where I got swarmed by more kids, and then to the corporate suites, where some adults were getting hammered on the cheap beer offered by the stadium.

"Where are your eyes?" one man asked me right before the seventh-inning stretch. Not wanting to blow Toasty's cover, I pointed to the sunglasses, which were about a foot below the place where I had an actual view. "Huh," he responded.

Other adults in the suites couldn't stop commenting on Toasty's calves, and I responded to their compliments by sticking my leg out and pretending to flex.

And then there were those adults who tried to guess who was inside the Toasty suit. "It's a twelve-year-old," one stated confidently. "It must be a girl," another said.

I was so busy, I barely paid attention to the game. The Vibes ended up losing 15 to 8, so I didn't miss a lot. But then the fireworks started, and Salario and I raced over to the stadium exit so I could high-five fans as they left.

On the way out, I recognized many of the people I'd interacted with during the game. Since this was the second-to-last game of a season that had started May 23 and ended that weekend, some were saying so long to Toasty until next year, and were especially heartfelt in their goodbyes.

Although I had worked as Toasty for just one night, I left the stadium feeling like I had been a s'more my whole life. All warm and toasty.
KEEP WESTWORD FREE... Since we started Westword, it has been defined as the free, independent voice of Denver, and we'd like to keep it that way. With local media under siege, it's more important than ever for us to rally support behind funding our local journalism. You can help by participating in our "I Support" program, allowing us to keep offering readers access to our incisive coverage of local news, food and culture with no paywalls.
Make a one-time donation today for as little as $1.