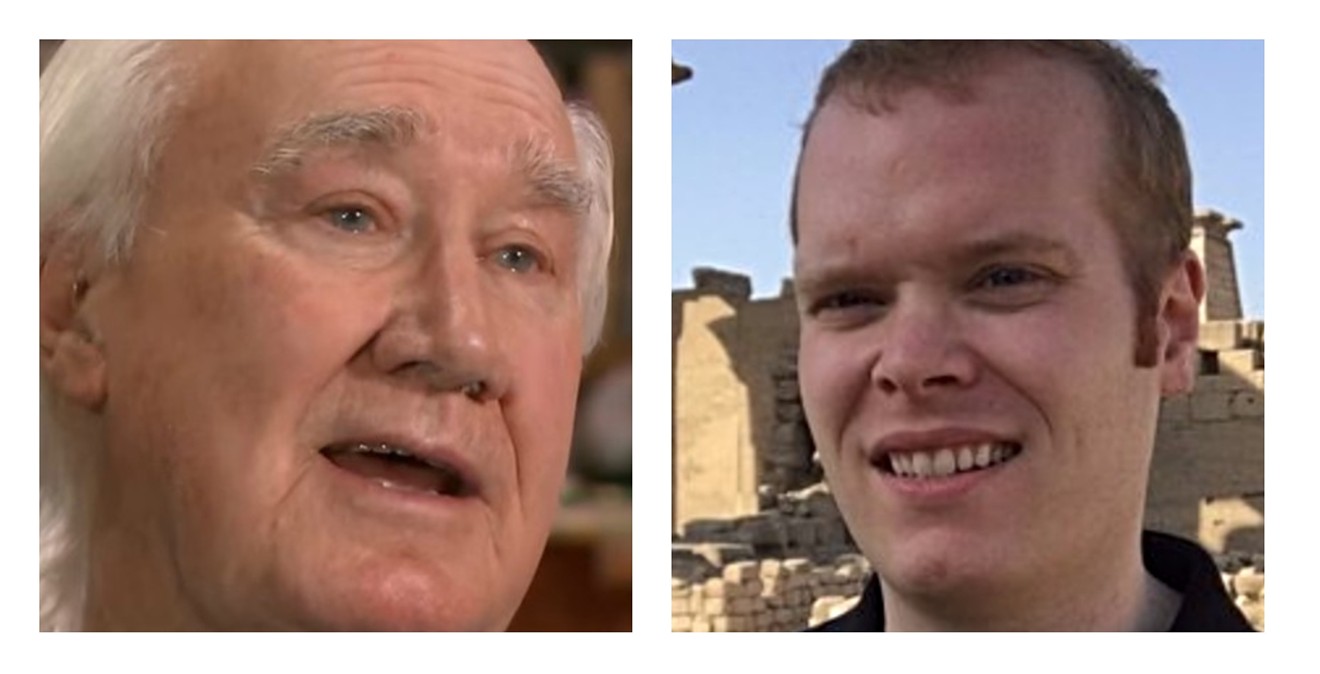 The late Forrest Fenn and reported treasure discoverer Jack Stuef. CBS via YouTube/@stuef
New Mexico author Forrest Fenn's announcement that a treasure he'd hidden in 2010 had been discovered — a few months before his death in September at age ninety — was greeted with doubt by many, in part because he refused to name the finder.

Among the doubters was Linda Bilyeu, ex-wife of Randy Bilyeu, one of several Coloradans who died searching for it. "I believe he never hid the treasure," she told Westword. "He needed attention, and this is how he got it. Fenn needed more attention, which is why he said the treasure has been found with 'no proof.'"

A couple of weeks after Fenn's passing, an anonymous tribute to him signed by "The Finder" didn't quell the questions. But now, the author of that piece, Jack Stuef, a 32-year-old medical student from Michigan, has come forward in conjunction with an article in Outside magazine that confirms his claims.

This twist would no doubt have pleased Fenn, who certainly loved a good tale.


YES! FORREST HAS CONFIRMED THAT THE TREASURE HAS BEEN FOUND!

The search is over!

"It was under a canopy of stars in the lush, forested vegetation of the Rocky Mountains and had not moved from the spot where I hid it more than 10 years ago. I do not know the person who found it, but the poem in my book led him to the precise spot. I congratulate the thousands of people who participated in the search and hope they will continue to be drawn by the promise of other discoveries. So the search is over. Look for more information and photos in the coming days." — Forrest

Most early reports in the national and international press simply accepted Fenn's assertion. But over the next week, doubts began to creep into coverage when the promised photos failed to appear.

Against this backdrop, a GoFundMe page materialized under the headline "Forrest Fenn Treasure: Claims Life of Mike Sexson." The introduction to this crowdfunding campaign to help survivors of the most recent Colorado victim begins: "On the night of Monday, March 16, 2020, Mike Sexson took off on an adventure. This adventure had kept him excitedly curious about a treasure that was hidden somewhere in the Rocky Mountains. Mike loved puzzles and excitement and unknown, fun adventures. He had been working on this treasure find for over a year. He read all of the clues written by the man who hid the treasure more than ten years ago, Forrest Fenn. He investigated every aspect of this hunt. He just felt he was on the right trail. He just knew he would find the treasure and take care of his wife, Beth, kids and his friends and family. Mike was adventurous, curious, kind, full of life and lived life on the edge."

The account continues: "So on the night of Monday, March 16, 2020, Mike set off to find his riches. Unfortunately, his hunt did not turn out the way he, or any of us, thought it would, or how it had been going more than a dozen times he went out searching. He became the seventh fatality looking for this treasure. For whatever reason, Mike became lost in the wilderness. Mike died from exposure to the cold on what is believed to have been day three and was found on day five. I often wonder how coincidental it was for the treasure to be found less than three months after I contacted Mr Fenn about Mike’s death.... I begged Mr Fenn to stop this game. It isn’t fun anymore. It’s dangerous!"

Other Coloradans who died looking for Fenn's treasure included Eric Ashby and pastor Paris Wallace. In correspondence with Westword, Fenn regularly expressed condolences for survivors of those who lost their lives, but declined to call off the treasure hunt, choosing instead to emphasize safety — and to note that the hiding spot was accessible to someone of advanced years, as he had been when he put it in place.

Stuef is far from advanced. His "Finder" piece, which was originally published on September 23 and has been updated with his byline, doesn't offer specifics about the location of the treasure (a chest said to contain $2 million in gold and jewels). Instead, an excerpt gives these details:

I figured out the location where he wished to die (and thus, where his treasure was) back in 2018, but it took me many months to figure out the exact spot. This treasure hunt was the most frustrating experience of my life. There were a few times when I, exhausted, covered in scratches and bites and sweat and pine pitch, and nearing the end of my day’s water supply, sat down on a downed tree and just cried alone in the woods in sheer frustration.
I spent about 25 full days of failure looking for the treasure at that location before getting it.

When I got back to my rental car after the find, I put my hands on the steering wheel and bawled my eyes out. Then I remembered Forrest said the person who found the chest would either laugh out loud or start crying.
I realized he had been right and started to get annoyed that I still couldn’t stop his quotes from popping into my head even after the chase was finally done.

I laughed at myself for getting annoyed. Then I realized I had just fulfilled his other premonition about laughing out loud.

Yesterday, December 7, in a new article on Medium.com timed to coincide with the Outside scoop (which reveals that the treasure was found in Wyoming), Stuef explained that he had chosen to remain anonymous after obtaining the chest "not because I have anything to hide, but because Forrest and his family endured stalkers, death threats, home invasions, frivolous lawsuits, and a potential kidnapping — all at the hands of people with delusions related to his treasure. I don’t want those things to happen to me and my family."

As for his decision to step out of the shadows, he said, "The U.S. District Court for New Mexico has ruled that Forrest’s estate must provide some of my personal information to a woman I do not know and with whom I have never communicated who has brought a meritless lawsuit against me. This would make my name a matter of public record, so I chose to come forward today."

He added: "My family and I have prepared for the potentiality of this day. Since finding the treasure, I moved to a more secure building with guards and multiple levels of security, and I have taken appropriate measures to protect myself. After I brought the treasure down from Wyoming to Santa Fe to Forrest, I put it in a vault (not Forrest’s) at a secure location in New Mexico. It will remain there until I sell it."

That's the Stuef dreams are made of.
KEEP WESTWORD FREE... Since we started Westword, it has been defined as the free, independent voice of Denver, and we'd like to keep it that way. With local media under siege, it's more important than ever for us to rally support behind funding our local journalism. You can help by participating in our "I Support" program, allowing us to keep offering readers access to our incisive coverage of local news, food and culture with no paywalls.
Make a one-time donation today for as little as $1.