Senator Michael Bennet during a January speech in which he trashed Texas Senator Ted Cruz. CNN via YouTube
Earlier this month, Senator Michael Bennet announced that he has prostate cancer. Today, April 19, his spokeswoman reveals that the operation to remove the cancer was a success and emphasizes that he's doing well.

"Last weekend, Michael underwent surgery and is recovering at his home in Colorado," notes Courtney Gidner in a statement on Bennet's behalf. "His doctors report the surgery was completely successful and he requires no further treatment."

The 54-year-old Bennet had previously divulged his plan to undergo surgery during the congressional recess, which is currently under way. But at the same time, he said that, depending upon his recovery, he still intended to run for president in 2020.

The first part of this one-two punch was delivered via an email blast titled "Statement from U.S. Senator Michael Bennet," which arrived at 8:35 p.m. Denver time on April 3. It read:


Late last month, I was diagnosed with prostate cancer. While hearing news like this is never easy, I am fortunate it was detected early, and as a result, my prognosis is good. During the upcoming Senate recess, I will have surgery in Colorado and return to work following a brief recovery.

The work we have in front of us to restore a politics that is worthy of our kids and grandkids has never been more important. This unanticipated hurdle only reinforces how strongly I feel about contributing to the larger conversation about the future of our country, and I am even more committed to drive that conversation in a positive direction.

In the meantime, the Colorado Independent unleashed Bennet's first interview about his cancer diagnosis. In a conversation with the site's Mike Littwin, he made explicit the presumption by political insiders that he would join the crowded field (including another Coloradan, ex-governor John Hickenlooper) bidding to defeat President Donald Trump next year. "The idea was to announce sometime in April," Bennet told Littwin.

Surgery threw off his schedule.

What challenges lay ahead for Bennet from a health perspective? Altitude Sports host Vic Lombardi knows full well, and he's been sharing the information with a bravery and honesty that's exceedingly rare for a public figure. 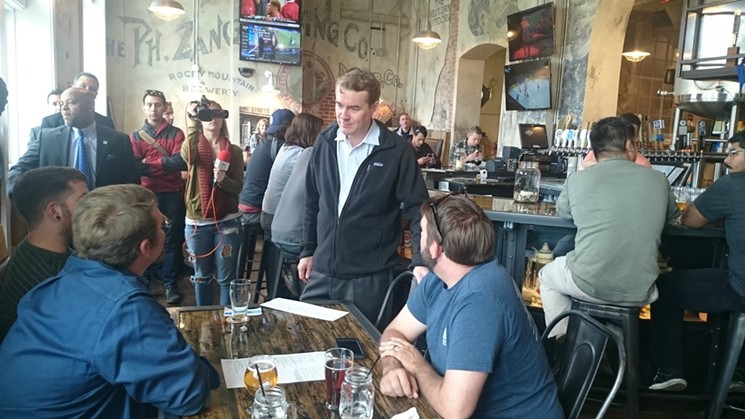 Senator Michael Bennet meeting and greeting Metro State University of Denver students during the 2016 campaign.
Photo by Michael Roberts
In February, Lombardi revealed that he had prostate cancer — a particularly aggressive form for someone of his age, 49. He had surgery on February 27, and his doctors said he should anticipate being out of commission for a month before being able to return to work. However, Lombardi beat that estimate, appearing on his Altitude Sports Radio program within about two weeks, albeit from his home studio, and returning to TV for the pre- and post-game show related to the Denver Nuggets' loss to the Indiana Pacers on March 24. He's also started producing a prostate-awareness podcast.

In addition, Lombardi created an incredibly unfiltered cancer diary video that pulled no punches in regard to post-surgical effects, including incontinence.

Dealing with such matters is tough enough under ordinary circumstances. Doing so from the campaign trail ratchets up the degree of difficulty that much higher — and it won't be the only hurdle Bennet will have to clear in order to wrest the Democratic presidential nomination from better-known hopefuls such as Bernie Sanders, Elizabeth Warren, Kamala Harris, Corey Booker and more.

Lately, Bennet's national reputation has focused largely on two fiery speeches from the Senate floor — an October 2018 scorcher about the controversial hearings to confirm Brett Kavanaugh to the U.S. Supreme Court, and a January salvo in which he trashed Texas Senator Ted Cruz for shedding "crocodile tears" prior to a government-shutdown vote. But in most other respects, he's a rather low-key fellow more comfortable with wonkiness than fiery stump rhetoric — a quality that may not serve him well against Donald Trump, who will undoubtedly dig deep into the insults he learned in seventh grade to smack every Democratic rival in sight. And that's not to mention Bennet's status as yet another white man seeking the nation's highest office.

Then again, Bennet's prostate cancer has provided a natural talking point that could help him stand out from the field in a presidential race, should he be able to enter it as anticipated.

In the meantime, spokesperson Gidner added this: "Michael and his family deeply appreciate the well wishes and support from Coloradans and others across the country, and he looks forward to returning to work after the recess."

This post has been updated to include details about Senator Michael Bennet's cancer surgery.
KEEP WESTWORD FREE... Since we started Westword, it has been defined as the free, independent voice of Denver, and we'd like to keep it that way. With local media under siege, it's more important than ever for us to rally support behind funding our local journalism. You can help by participating in our "I Support" program, allowing us to keep offering readers access to our incisive coverage of local news, food and culture with no paywalls.
Make a one-time donation today for as little as $1.