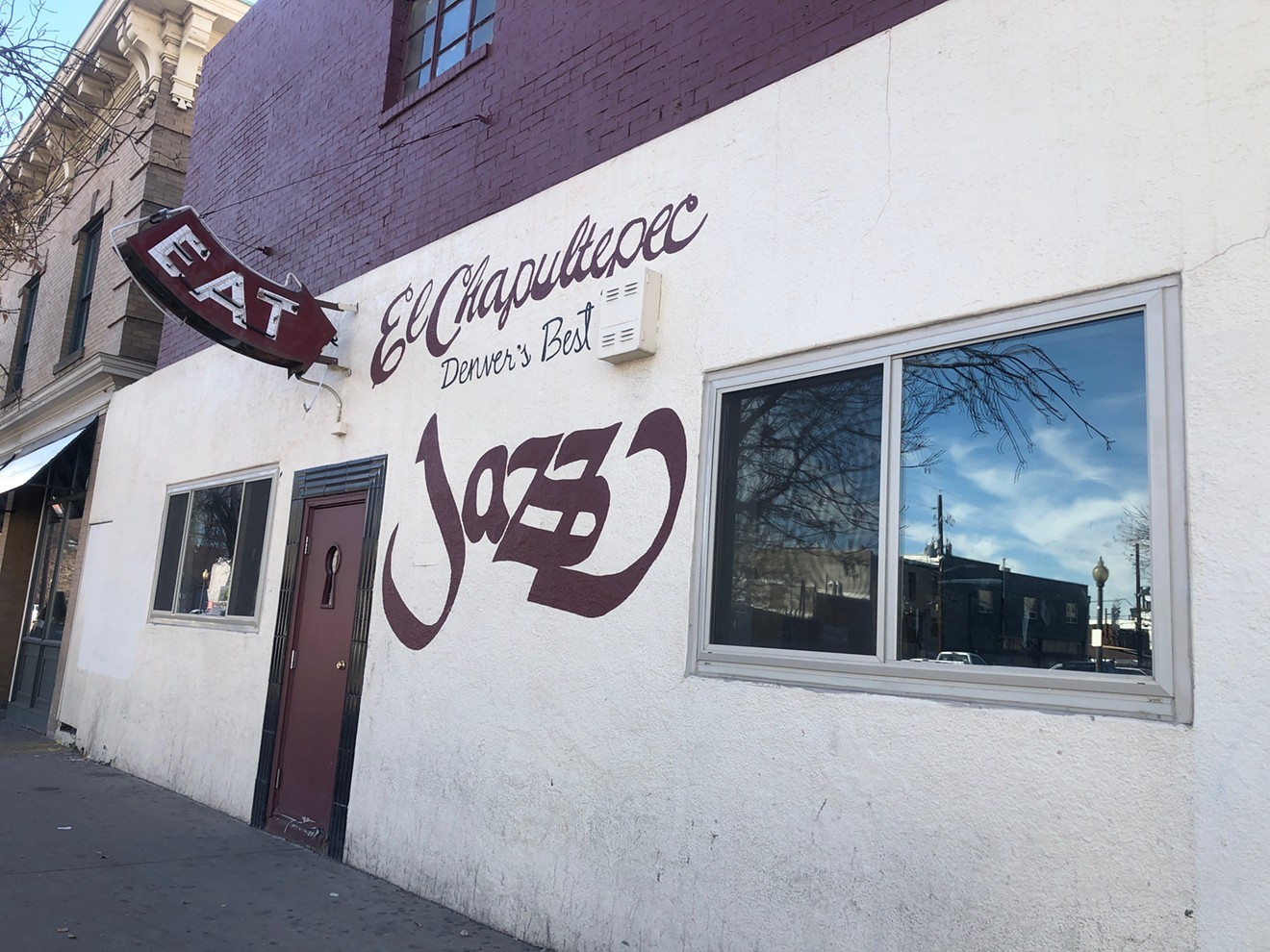 The El Chapultepec building finally has a new owner. Jon Solomon
Monfort Companies, a Colorado real estate investment and development firm, has bought the iconic El Chapultepec building at 1962 Market Street along with the structure next door at 1320 20th Street that currently houses the Giggling Grizzly; the two spaces will be combined into a joint venue.

El Chapultepec, which opened the day Prohibition ended in 1933, had become a world-famous jazz venue before it finally shuttered in December 2020. One of Denver's more notorious club owners had the lease on the property until early this year, but since then, the future of the historic spot has been in limbo. Until now.

"The forthcoming rehabilitation and amalgamation of El Chapultepec and the Giggling Grizzly will build upon the momentum prevalent in this neighborhood and, ideally, catalyze continued investment here. We see investment in this neighborhood as an economic imperative that will help Denver claim its spot as a top entertainment destination nationally," says Kenneth Monfort, executive vice president of Monfort Companies, in an announcement of the deal. Kenneth Monfort is the son of Charles Monfort, a co-owner of the Colorado Rockies with his brother, Dick.

Beyond that, Monfort isn't yet revealing exactly what kind of entertainment will go into the combined venues. "Live music, broadly," he says. "But yes, there will be a jazz element."

The Giggling Grizzly business, which has leased its bar space for two decades, was not included in the deal. "We love LoDo, and we have no intentions of going anywhere soon," says managing partner Dewey Bramson.

Monfort Companies paid $5.8 million for the El Chapultepec and Giggling Grizzly buildings, which are just up Market Street from Dierks Bentley's Whiskey Row, a redevelopment of the former LoDo's Bar and Grill at 1946 Market that opened on New Year's Eve 2021. Monfort Companies, which partnered on that project, had already sold the complex of buildings — including the historic Mattie Silks, a former brothel, and a new structure — for $24 million earlier this year.

Dierks Bentley's Whiskey Row opened on New Year's Eve 2021.
Jon Solomon
Just down the street from Whiskey Row, Monfort Companies and its partners plan to redevelop 1920 and 1926 Market Street into Riot House, which will be a "high-energy concept that will offer patrons an award-winning food and beverage program in an exhilarating and modern setting." The venue "will feature a large center bar, dance floor, rooftop patio and world-class audio-visual system," according to the partners.

Riot Hospitality Group already operates a Riot House in Scottsdale, Arizona. Monfort Companies plans to open the Riot House location in Denver at the end of 2023, and held a ceremonial groundbreaking this morning, where the El Chapultepec deal was announced.

Mayor Michael Hancock was on hand for the festivities on Market Street. "This is going to become the party central of downtown Denver," he said.

"Of course, we will not do anything to erase El Chapultepec out of the history books," Monfort added. "In fact, we're going to embrace that history that place had in Denver. ... If you're from Denver, you had been there, for sure. If you hadn't been there, that's a shame. It was a real gem in the city of Denver, and we hope to embrace that and upgrade it and bring it into a more modern service for this community." The groundbreaking for Riot House, going into the buildings at 1920 and 1926 Market Street.
Conor McCormick-Cavanagh
The Monfort family has been a key player in the development of LoDo in recent years; the baseball team plays just up the street at Coors Field. Dick Monfort, the main owner of the team, developed the multi-building McGregor Square, which opened in June 2021, just in time for the MLB All Star Game in Denver the following month.

The McGregor Square site at 1901 Wazee Street was just a parking lot when El Chapultepec was at the peak of its popularity. Jerry Krantz had taken over ownership of the bar from a relative in 1968 and introduced jazz there. Over the years, it featured performances from legends like Ella Fitzgerald, Chet Baker and Tony Bennett; Bono, Mick Jagger and former president Bill Clinton all patronized the joint.

The club got the nickname "the ’Pec" from tenor saxophonist Freddy Rodriguez Sr., who headed up the house bands for nearly four decades before he died from complications related to COVID in March 2020.

Krantz died in 2012; local real estate company Shames Makovsksy bought the building and leased it to Krantz's daughters so that they could continue running the club. But in December 2020, they announced that they were closing the place for good. While the pandemic played a role in their decision, Anna Diaz and Angela Guerrero said that baseball and growth were also issues.

“Jazz musicians and blues musicians, they shouldn't have to time their sets around the baseball innings and when the crowd is going to get out and be wild," Diaz said at a December 2020 press conference outside the club. "They should be able to play their music, and the crowd [should] just be there to enjoy them. And that's been really difficult to manage, and we've been doing it a long time.”

Diaz also pointed out that the ’Pec's employees, musicians and customers shouldn’t have to worry about their safety when they left the club, “whether it's the tent city or the drunken mobs that are pouring out onto Market Street at two o'clock. It's just really taking a toll on us, and it's just that Denver's different than it used to be, and 20th and Market is different than it used to be.”

In early 2021, Valentes Corleons, an aspiring nightclub maven whose legal name is Hussam Kayali, announced that he'd be taking over the El Chapultepec building and renaming it Cantina. By then, many of the club's historic contents had been sold. "There's nothing original left," Monfort says of the interior.

Corleons, who also ran the Beta Event Center at 1909 Blake Street and the Cabin Tap House at 1919 Blake Street — previously home to Falling Rock Tap House — was still renovating El Chapultepec into Cantina when the city shut down Cabin Tap House after a double homicide inside that venue early on January 1, 2022. Days later, Denver also shut down Beta over licensing and public-nuisance cases. Not long after, Corleons returned the keys of the El Chapultepec building to Shames Makovsky.

And now those keys are in the hands of Monfort Companies.

Update: This story has been updated to clarify the status of the Giggling Grizzly bar; that business was not part of the deal.
KEEP WESTWORD FREE... Since we started Westword, it has been defined as the free, independent voice of Denver, and we'd like to keep it that way. With local media under siege, it's more important than ever for us to rally support behind funding our local journalism. You can help by participating in our "I Support" program, allowing us to keep offering readers access to our incisive coverage of local news, food and culture with no paywalls.
Make a one-time donation today for as little as $1.