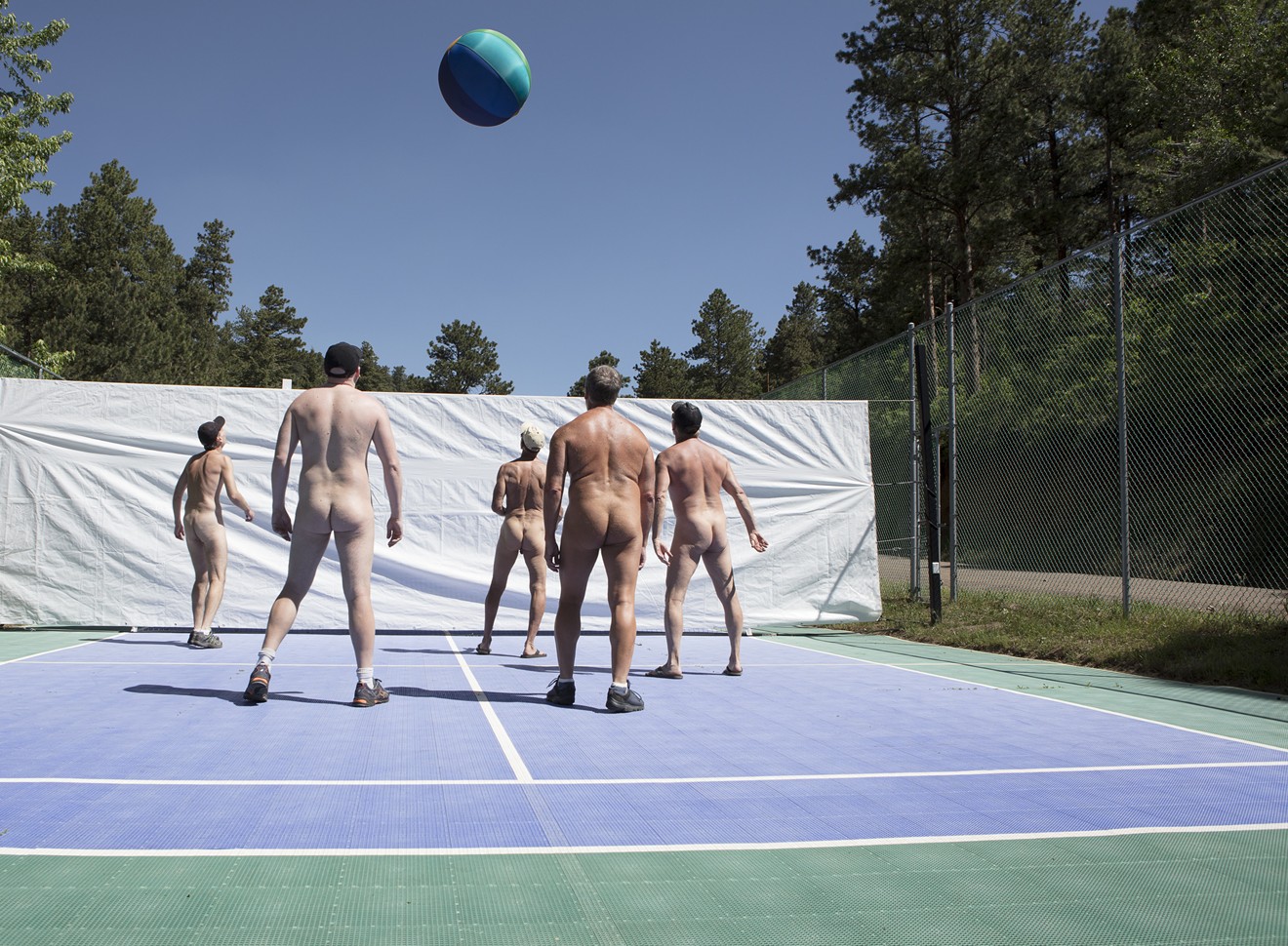 Members often compete in friendly, fun-in-the-sun games. Photo by MarTographer
Chuck’s parents weren’t sure how to introduce him and his younger brother to their lifestyle choice. But as the boys got older, they decided it was time to take them to Mountain Air Ranch, Colorado’s family-friendly nudist club that was then almost thirty years old.

“Everybody thinks that seeing your mom and dad naked for the first time is a total shock. For a twelve-year-old kid, maybe," says Chuck, recalling his first visit to the club in 1962. "But I love this place. It either works for you or it doesn’t.” And it works for Chuck, who's considered the ranch his home away from home since he returned from serving in the Vietnam War. (He, like many regulars at Mountain Air Ranch, gave only his first name for this piece.)

Mountain Air Ranch, 25 minutes southwest of Littleton between Bald Mountain and Pyramid Peak, has been a favorite spot of nudists for weekend trips or summer vacations for generations. Founded in 1935 by a group of Colorado nudists looking for freedom from persecution for practicing nudism, then gaining popularity (and notoriety) around the country, the Colorado Sunshine Club bought a patch of mountain land that could be used as a retreat. Its transformation into a family-friendly resort started with turning a chicken coop into a sauna. The facility has been in continuous operation over the years, changing its name to Mountain Air Ranch and providing a sanctuary for those who simply feel more comfortable in the nude. 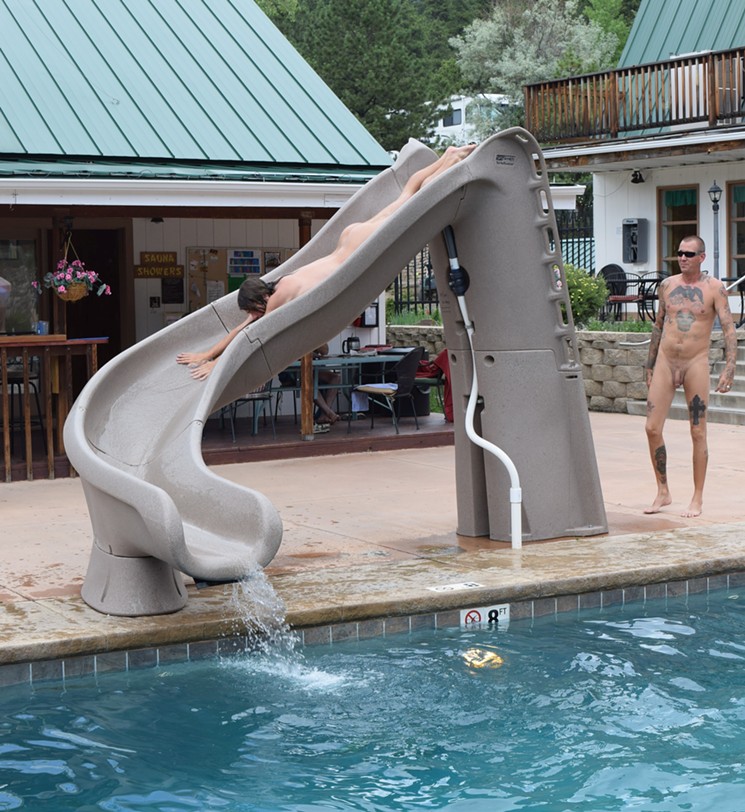 The swimming pool slide is particularly fun without a swimsuit.
Photo by Gary G., courtesy of Mountain Air Ranch
Today Mountain Air Ranch is part of a group of 180 family-friendly nudist clubs affiliated with the American Association for Nude Recreation, which is celebrating National Nude Week through July 15.

In advance of that celebration, about 150 Mountain Air Ranch members, new and old, alone and with families — and all stark naked — gather at the club on the last day of June. Men and women compete in a bocce ball tournament, nude sunbathers sit by the pool, and hikers clad in nothing but socks and boots traverse the trails across the approximately 150-acre property. All of these activities have one thing in common: sunscreen, since body parts that do not often see the sun are especially prone to sunburn.

The members have very different stories about what led them to nudism, though. Janet remembers being on a boat with high-school classmates in the early ’80s when one of the girls began complaining about the tan lines that she would surely sport at the upcoming school prom. When one of the boys shouted, “Take your top off!," the girl did, and Janet followed suit. She's been a nudist ever since.

Stella’s parents were hippies who always had a positive outlook about nudity. Stella began nude modeling for art classes, and when she decided she wanted more camaraderie, she started going to nudist clubs and met people like Paunch.

“I’ve been a member here forty years — half my life,” says Paunch, an eighty-year-old artist beloved by fellow members. Over the years, he's seen the club's highs and lows, and feels the current energy level is "at the top." 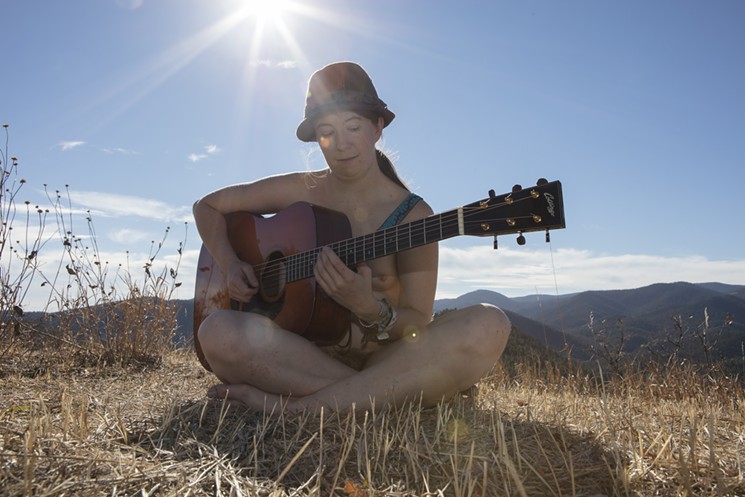 No clothes needed when you're playing the guitar.
Photo courtesy of Mountain Air Ranch
But while Paunch may be a popular member, he also illustrates a problem: The club's membership is aging. Chris May, director of Mountain Air Ranch, estimates that the average member's age is somewhere between 55 and 60. She and other leaders have been trying to figure out how to attract younger members, but they have yet to come up with an ideal solution. That creates an uncertain financial future for the club.

Only 15 percent of the facility's revenue comes from visitors, while 85 percent comes from memberships. If that amount were to drop below 85 percent, Mountain Air Ranch could lose its status as a nonprofit, increasing its tax burden. Membership typically costs $460 per year; for people thirty and under, the club has dropped the fee to $300, payable in monthly installments. May thinks that young people interested in exploring the nudist lifestyle could be turned off by having to make a yearlong commitment, and might be more amenable to trying it on a month-to-month basis.

To help attract a younger, more active crowd, Mountain Air Ranch is in the process of installing a disc golf course. May also wants to expand hiking trails and implement a daycare service, so that young couples can bring their kids and still enjoy the club’s many amenities.

A love of nudism is not limited by age, the members agree. “It’s just a matter of getting comfortable in your own skin. Your junk is no different from my junk,” notes Chuck.

“We kinda consider ourselves a big family,” adds Janet. 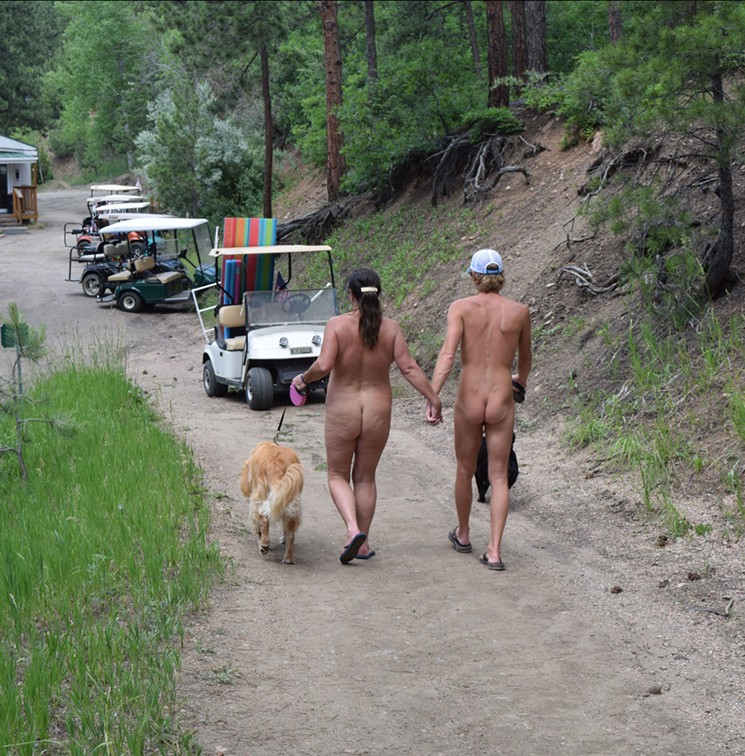 Members walk their dogs at Mountain Air Ranch.
Photo by Gary G., courtesy of Mountain Air Ranch
Around the country, some clubs attract more members because they focus not on nudism, but on sex. That's not a direction Mountain Air Ranch wants to take. Around the property, you'll frequently hear that “nude does not equal lewd,” a saying that could be the club's unofficial slogan. To May's dismay, the website still pulls in a fair amount of traffic from a Rooster article about the “kinkiest things you can do in and around Denver” that included the Mountain Air Ranch. “That’s not the image we’re trying to cultivate,” she says.

Instead, Mountain Air Ranch continues to look for a long-term solution that will guarantee the club is around to celebrate its centennial in 2035; members are already looking forward to unearthing a time capsule buried in 1985. In the meantime, they'll celebrate their lifestyle choice during National Nude Week with activities including a naked golf-cart rodeo, an International Skinny Dip on Saturday, July 14, and the fifth annual Body Art Festival on July 15. As always at the club, clothing will be optional. (Midway through my day at Mountain Air Ranch, I surrendered my jeans and button-down shirt and stripped down to nothing more than aviator sunglasses and a wristwatch. No sunburn to report, however.)

Drop-in admission is $30 per visitor per day; find out more on the Mountain Air Ranch Facebook page or call 303-697-4083.
KEEP WESTWORD FREE... Since we started Westword, it has been defined as the free, independent voice of Denver, and we'd like to keep it that way. With local media under siege, it's more important than ever for us to rally support behind funding our local journalism. You can help by participating in our "I Support" program, allowing us to keep offering readers access to our incisive coverage of local news, food and culture with no paywalls.
Make a one-time donation today for as little as $1.