Graves of 62 Nuns on the Move — Finally 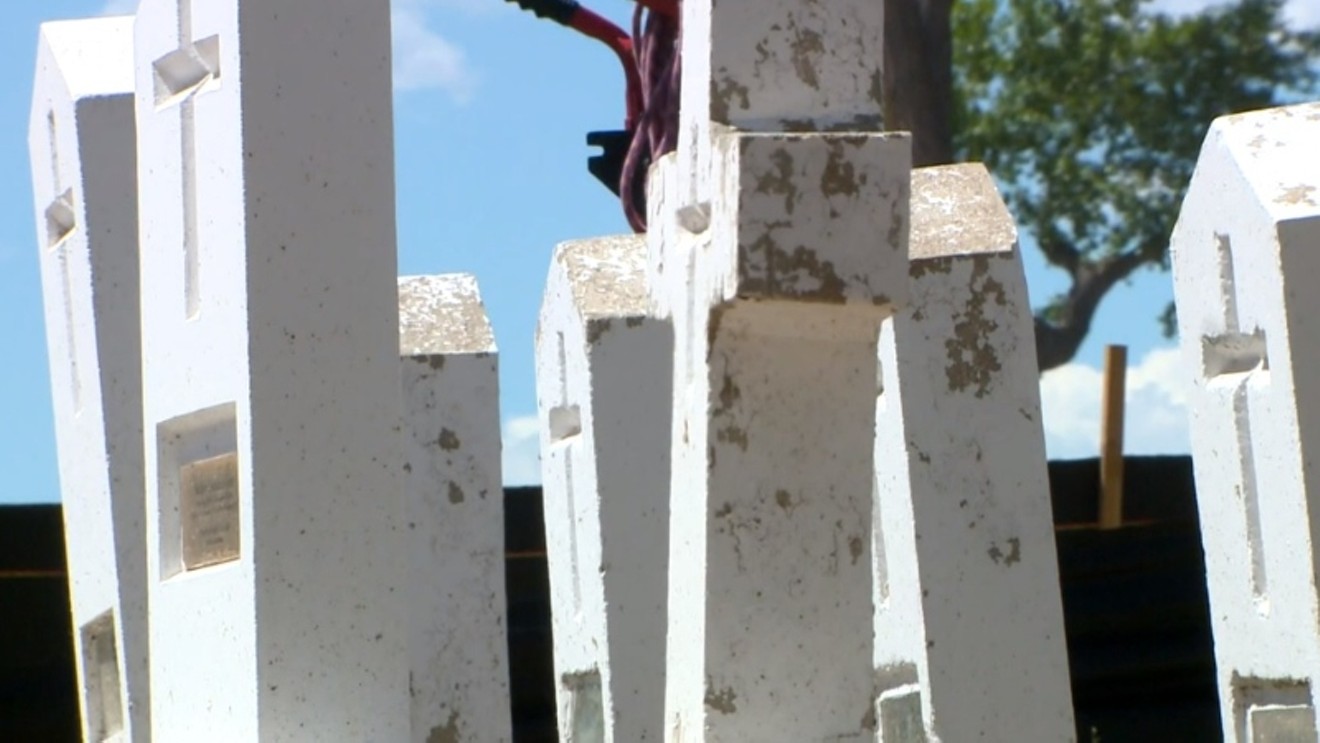 Grave markers for nuns buried in the cemetery at the old Loretto Heights University campus. Courtesy of 9News
The former campus of Loretto Heights University, at 3001 South Federal Boulevard, included an unusual feature: a cemetery where 62 nuns were buried — some more than a century ago. But this unusual situation is finally changing. The nuns' remains are now being relocated to Mount Olivet Catholic Cemetery, 12801 West 44th Avenue in Wheat Ridge, after more than a half-decade of discussion and debate.

The Sisters of Loretto founded Loretto Heights Academy as a Catholic girls' high school in 1886. Over the years, the school became a college that included teacher-education programs, nursing programs, and classes in business and dance for both men and women — not to mention the cemetery, which served as a final resting place for dozens of nuns who provided instruction.

In 1989, the campus was transformed into Teikyo Loretto Heights University, which focused on attracting international students. Two decades later, in 2009, Teikyo University Group, a multi-national education foundation based in Japan, opened Colorado Heights University, a nonprofit private institution, on the grounds, and Denver Public Schools also operated several programs there.

Over time, however, enrollment dwindled, and in 2016, Colorado Heights University announced that it would no longer accept new students and would close the facility entirely at the end of the 2017 academic year. Most of the 500 remaining students were expected to earn English-language certificates before the shutdown, and staffers pledged to help the remaining hundred or so complete programs at other nearby schools.

Meanwhile, the campus was put on the block, and it had plenty of attributes: fourteen buildings spread out over 76 acres, including a 1,000-seat theater, an interfaith chapel, a swimming pool, a cafeteria, residence halls and recreational amenities. The focal point of the campus was the landmark administration building designed by one of Denver’s premier architects, Frank E. Edbrooke, that was added to the National Register of Historic Places in 1975.

Still, the fate of the graves was top of mind for then-Denver Auditor Dennis Gallagher when he spoke to Westword back in 2017. At that point, the possible relocation of the nuns' remains to Mount Olivet was already a topic of conversation, but Gallagher, who died in April, noted that "it costs a lot to move a grave. That's why it's my hope that they'll leave it there and work it into a development somehow. I think it's only right for the developers and the city to maintain a cemetery for these women, who dedicated their whole lives to teaching. They should be able to rest quiet there — and I think it's a blessing to have all these saints buried on the campus. It's good karma."

Westside Investment Partners, which bought the campus in 2018, was reportedly open to building around the cemetery. But in the end, the decision was made to move the graves to Mount Olivet and construct what's characterized as a "memorial garden" in their honor where the nuns had previously been buried.

Denver City Council approved rezoning for the area in May 2021, formally sanctioning a plan approved two years earlier that pledged "preservation and maintenance of the historic buildings on campus; a better pedestrian experience and improved mobility through street improvements and new bike lanes; development that matches the patterns of surrounding neighborhoods; for-sale and for-rent affordable housing, including units for families (two bedrooms or more) for a wide range of incomes; and climate friendly construction that will be the first major residential development in Denver to test the Denver Green Code." Among the centerpieces of these efforts was the transformation of the school's Pancratia Hall into 72 affordable apartments; the renamed Pancratia Hall Lofts opened in May.

As for the nuns, they're bound for a new destination — one where they'll presumably be able to stay for eternity.
KEEP WESTWORD FREE... Since we started Westword, it has been defined as the free, independent voice of Denver, and we'd like to keep it that way. With local media under siege, it's more important than ever for us to rally support behind funding our local journalism. You can help by participating in our "I Support" program, allowing us to keep offering readers access to our incisive coverage of local news, food and culture with no paywalls.
Make a one-time donation today for as little as $1.