"Everything from murals to sculptural elements. The path itself would probably have some color and storytelling on the path," says Hadley Peterson, project manager for the 303 ArtWay Heritage Trail for Radian, a Denver-based nonprofit architecture and urban design group that focuses on social equity.

The 303 ArtWay Heritage Trail, which would create a fully connected multi-use path between the 40th and Colorado RTD A Line station and Holly Square, has been in the works since 2014, several years before the Park Hill Golf Course closed. But whether it takes a direct route or a more circuitous journey through Northeast Park Hill depends on two upcoming votes regarding that property.

On January 23, Denver City Council will vote on referring a measure to the April ballot that proposes lifting the conservation easement that rests on the Park Hill Golf Course and allowing development on the property. If the proposal lands on the April 4 ballot and Denver voters approve the measure, it would clear the way for a mixed-use development divided between housing, including some affordable components, retail establishments like a grocery store, and open space. The development would also host the 303 ArtWay Heritage Trail.

The idea for establishing the 303 ArtWay Trail came out of community meetings that the Urban Land Conservancy held in 2014. The ULC owns significant real estate holdings across Northeast Park Hill.
After receiving some grant funding, the Urban Land Conservancy brought Radian on board and partnered with the firm to complete a corridor study for the project in May 2020.

"Its main purpose when it was envisioned was to increase safety, mobility and connectivity in the Northeast Park Hill community and highlight artists and activists that have brought so much life to this neighborhood," says Peterson.

"I’ve seen the challenges that we have, navigating throughout Northeast Park Hill. There are some real dangerous intersections that can lead to some challenges. I think over the years, or even decades now, those concerns have arisen, and it’s just about the community empowering itself," says Herman White, a managing partner at the Holleran Group, a development firm that owns an equity stake in the Park Hill Golf Course property. Westside Investment Partners bought the property from the Clayton Trust for $24 million in 2019 and brought the Holleran Group on board in 2020.

For White, who grew up in the neighborhood, some of the major infrastructure issues in Northeast Park Hill are the lack of lighting and missing sidewalks. He is also bothered by the idea of "not having cultural entities throughout the neighborhood that consist of the pride that we all feel being from the community." 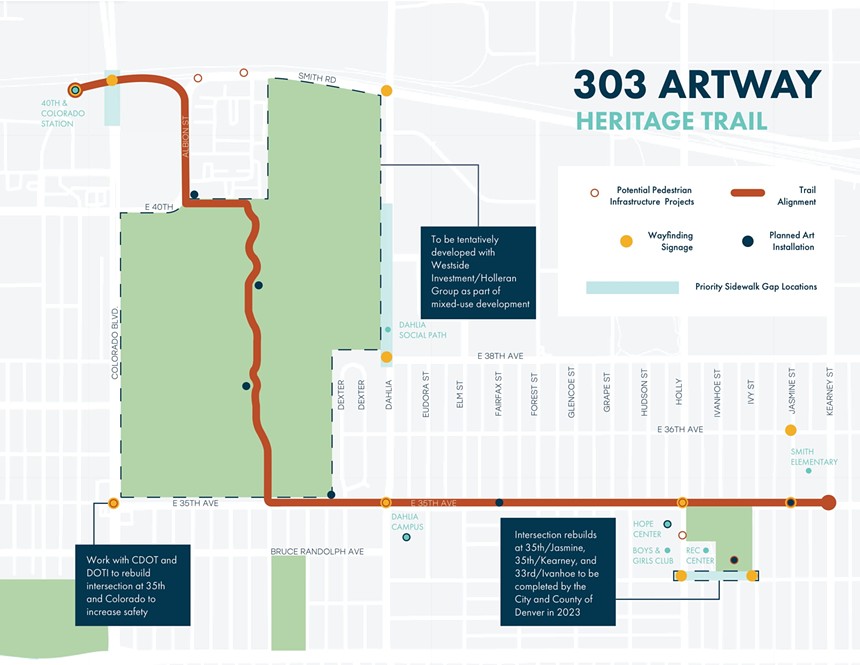 The 303 ArtWay Heritage Trail has been in the works since 2014.
Courtesy of Radian
Since the completion of the corridor study, Radian has been working with the Trust for Public Land to implement the desires of the community for this type of corridor along sections not on the Park Hill Golf Course.

Using grant and donor money, Radian has worked with the City of Denver to improve sidewalk infrastructure along the designated pathway and to add bike lanes. More lighting has also been added in order to "create a more safe area for people moving in and around the neighborhood," according to Peterson.

To help the 303 ArtWay Heritage Trail live up to its name, Birdseed Collective painted a mural at 40th and Colorado in 2017; in late 2022, artist Marley Boling led the painting of a Chauncey Billups mural on of the outdoor basketball court in Skyland Park. Billups, an NBA champion and the head coach of the Portland Trail Blazers, hails from Park Hill.

According to Peterson, the 303 ArtWay Heritage Trail will be built in its entirety with or without the development of the Park Hill Golf Course; if the property remains open space, the path will just detour around the property. But the ideal situation for the trail would be for it to weave through the golf course land, Peterson suggests.

"It is safer and is kind of a better option, but then it also helps with the funding piece of this project, because we would be working in partnership with Westside to fund the portion of the trail that would go through that site," says Peterson, who notes that the project needs about $4 million more to be completed, with some of that money coming from the developers.

"We are truly committed to supporting this initiative, [specifically] financially, around a million dollars per mile throughout the site," says White. Westside and Holleran do not know the exact length of the golf course section of the trail — that will be determined by a park-planning process — only that it will be under two miles.

If the trail is constructed through the property, the art along it would flow from big to small. At 40th and Colorado, there would be large "welcome to the neighborhood" artwork. "As you move through the park, the experience goes down to a smaller scale," says Peterson.

The artists designing elements along the trail would be selected after the April 2023 vote, if the measure is approved.

White envisions potential artwork that honors Gerie Grimes, a community leader in Park Hill and a member of the Colorado Women's Hall of Fame who passed away in 2022. He also hopes to see artwork highlighting the Park Hill Pirates Youth Sports Organization, which counts Denver football legends like Calais Campbell and Lendale White among its alumni.

"It will be aesthetically pleasing to ensure that we have sidewalks and intersections. I think a lot of the pleasure will be in having a community that is connected," concludes White. "Installing the historical as well as the cultural legacy within the community."
KEEP WESTWORD FREE... Since we started Westword, it has been defined as the free, independent voice of Denver, and we'd like to keep it that way. With local media under siege, it's more important than ever for us to rally support behind funding our local journalism. You can help by participating in our "I Support" program, allowing us to keep offering readers access to our incisive coverage of local news, food and culture with no paywalls.
Make a one-time donation today for as little as $1.