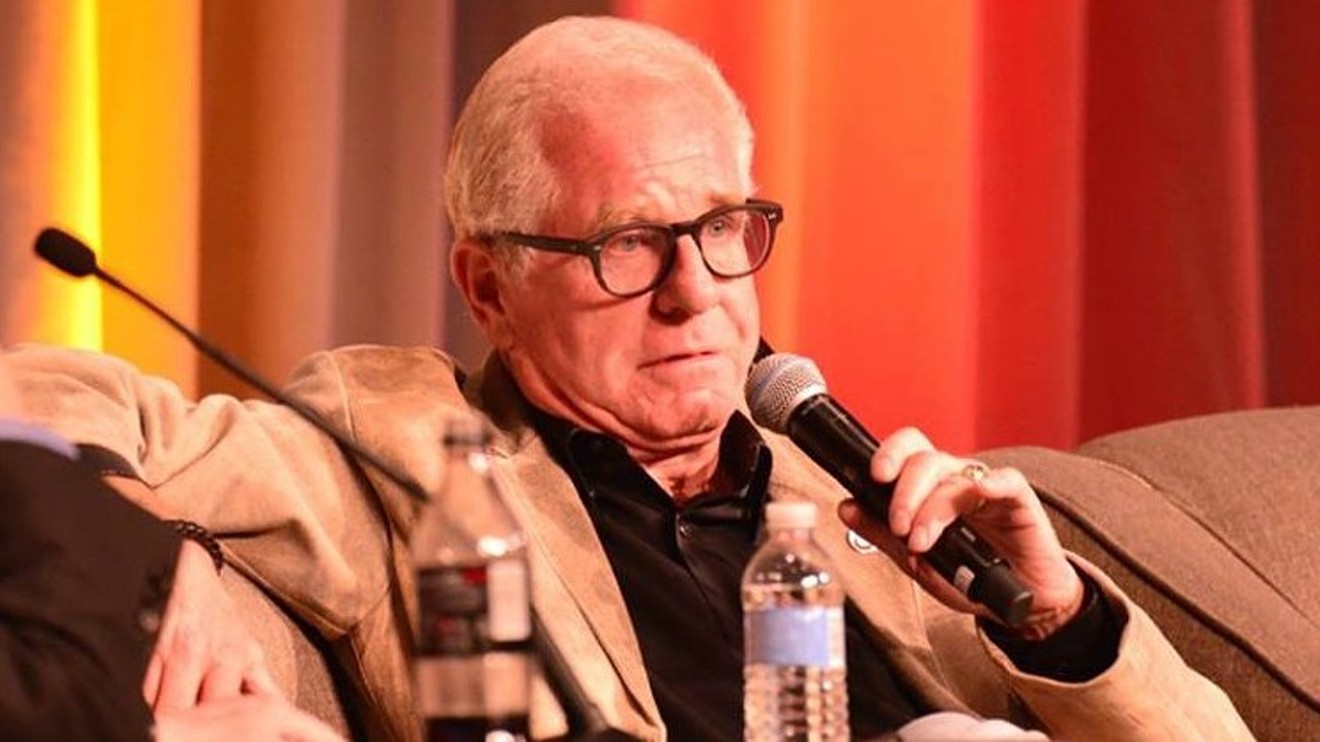 Peter Boyles at a 2015 event. Facebook
Today, January 10, 710 KNUS talk-show hosts Peter Boyles and Steffan Tubbs are traveling to Vancouver, where they'll broadcast live on Friday about the Canadian city's safe-use sites — facilities where individuals can inject illegal drugs such as heroin in a setting intended to prevent overdoses. The sites are a model for a Denver City Council-approved safe-use pilot program that will become a reality if proposed legislation enabling it is approved by the Colorado General Assembly and signed into law by Governor Jared Polis.

Proponents such as Denver City Council member Albus Brooks, Representative Leslie Herod, Harm Reduction Action Center executive director Lisa Raville and the Drug Policy Alliance's Art Way argue that these centers save lives even as they connect users to services that can help them break their addiction. But Boyles has a very different viewpoint.

While he characterizes the Vancouver trip as a fact-finding mission, he firmly believes that building such a site in Denver will lead to a worsening of the city's already serious opioid crisis and make Denver a magnet for addicts across the country, leading to increased crime and death.

"Can anyone imagine the clarion call to IV drug users, whether it's heroin or cocaine or meth?" he asks. "Then imagine how they'll feel when they hear, 'You can't be stopped for using IV drugs and we'll supply a place to do it.'"

Boyles has had his own substance-abuse challenges over the years, as he freely admits. "I'm in recovery, but I never shot drugs," he says. "I smoked them and ate them and drank them, but I've never used a needle." He adds that he backed marijuana legalization, "but this is altogether different — and it's not like handing out condoms during the AIDS epidemic, either. This is like having a big bar and letting people like me go in and drink. It's frightening."

Safe-use-site advocates frequently portray Vancouver as a success story, but Boyles sees it as anything but. He points to evidence like the City of Vancouver graphic below, which shows a huge increase in overdose deaths over a decade. 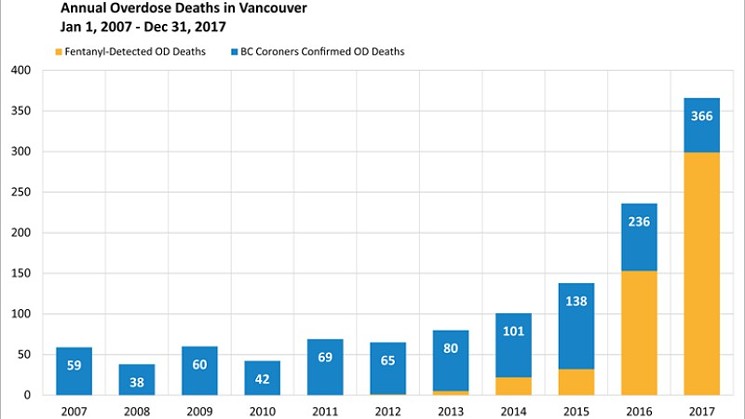 vancouver.ca
The OD death toll is even greater in Vancouver's province, British Columbia. As you can see by another City of Vancouver graphic, casualty rates from suicide, homicide, motor-vehicle accidents and prescription-drug abuse have remained relatively steady in BC since 2010. But deaths related to illicit drug use have taken an enormous leap, especially in 2015 and subsequent years. 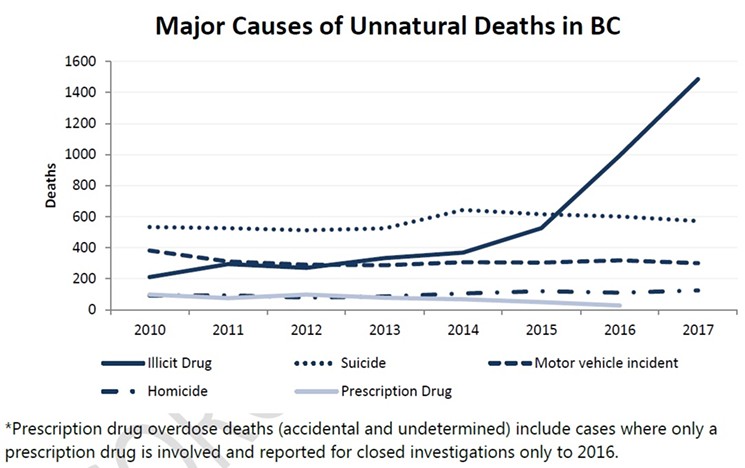 vancouver.ca
Given that the Insite, Vancouver's first safe-use facility, has been operating since 2003, blaming the centers for the recent increase in overdose tragedies is debatable. But there's no question the current situation in Vancouver is extremely concerning. Eleven people suffered fatal ODs in the city during a single week in July, and a British Columbia Coroners Service report, accessible below, reveals that the Vancouver Coastal Health Authority dealt with 408 deaths in 2018, representing the highest rate in Canada. That's 37 deaths per 100,000 individuals.

As for crime in Vancouver, it was down overall in 2017, but violent offenses increased, with the city experiencing the sharpest jump in homicides of any metropolitan area in Canada circa last year.

Establishing a causal link between these stats and intravenous drug use is difficult, but Boyles believes there's a connection: "I don't know how to break it to Albus Brooks, but black-tar heroin poppies aren't growing in Aurora. These drugs are brought in by cartels and put on the streets by soldiers working for the cartels. And where IV drug users are going to buy these drugs, the crime rates and assaults are going to skyrocket."

Moreover, Boyles goes on, the safe-use site legislation is a statewide measure that could lead to more facilities if the pilot program in Denver is deemed a success. "That means they could be in places like Commerce City," he says. "When they put in these sites, they'll put them in low-income areas, not Cherry Creek or Cherry Hills." 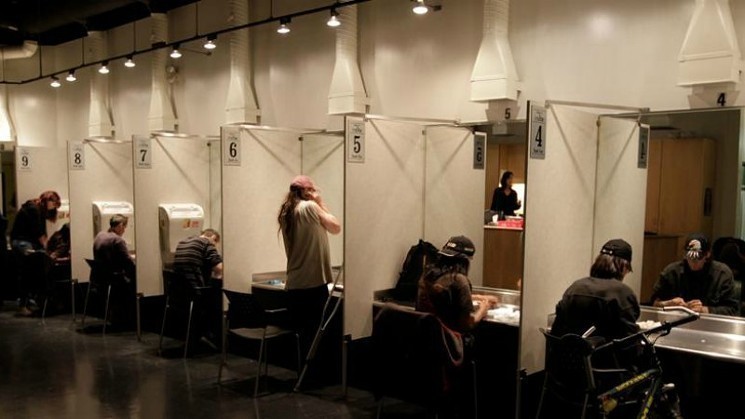 Injection booths at Insite, a supervised injection site in Vancouver visited by a delegation from Denver in January.
Facebook
Rather than taking part in what Boyles calls "the Potemkin-like tours the people who run these sites give," he and Tubbs plan to meet up with "elected officials from Seattle who are fighting against this there and people in Vancouver from the police union and the medical field who are opposed to the whole idea. I'm not going to be an instant expert on Vancouver, but at least I'll get to see what's happening with my own eyes. Of the people who are talking in favor of this, damn few of them have actually gone and eyeballed the streets of Vancouver."

He's under no illusions that the broadcasts he and Tubbs deliver will turn the tide against safe-use sites in the state.

"I think I'm standing in front of an oncoming train — and I don't think I'll win this fight," he concedes. "But I have to try because of my own recovery and my fear of what's going to happen if they unleash this."

The tandem of Boyles and Tubbs will be heard live from Vancouver from 5 a.m. to 9 a.m. and 4 to 7 p.m. on Friday, January 11, on 710 KNUS. Click to read the BC Coroners Service report, "Illicit Drug Overdose Deaths in British Columbia."
KEEP WESTWORD FREE... Since we started Westword, it has been defined as the free, independent voice of Denver, and we'd like to keep it that way. With local media under siege, it's more important than ever for us to rally support behind funding our local journalism. You can help by participating in our "I Support" program, allowing us to keep offering readers access to our incisive coverage of local news, food and culture with no paywalls.
Make a one-time donation today for as little as $1.