The abandoned Kenwood Dam spillway has the potential to become a skate park. Evan Semón
When parents and children gather on Sunday, June 5, at the Kennedy Soccer Complex, they won't be carrying soccer balls. Instead, they'll be rolling into the parking lot on skateboards, to attend the first-ever Southeast Denver Skatepark Pop-Up.

"We’re doing it to introduce the community to skateboarding. It’s going to be really beginner-friendly, but all ability levels are welcome," says Kaily Blackburn, one of the organizers. Blackburn, a skater herself, has been setting up the event with Councilwoman Kendra Black, whose district includes the complex.

"We have instructors there to teach kids the basics of skateboarding and learn about how skateboards are put together," Black adds. "And we're going to tell people about our efforts advocating for a skate park and hopefully get them on board." Specifically, they want community members to sign on to a plan to turn the nearby Kenwood Dam spillway into a City of Denver skate park.

"The purpose is to bring attention to our advocacy efforts advocating for a new skatepark. That's the overall goal. But also to introduce skateboarding to kids," Black explains.

For over a year, together with Black, local skaters of all ages have been pushing to turn the abandoned spillway, which already evokes skateboarding vibes with its cement wave and graffiti, into a skate park. Westword highlighted their campaign in a March cover story. 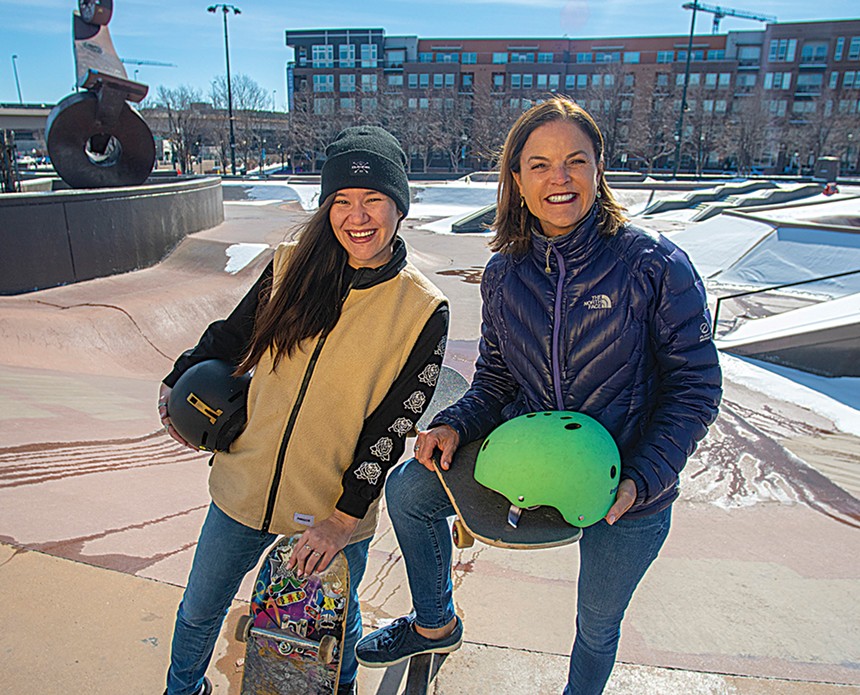 Kaily Blackburn (left) and Kendra Black at the iconic Denver Skatepark.
Evan Semón
When the construction of the Cherry Creek Dam wrapped up in 1950, the Kenwood Dam spillway was abandoned but remained intact. By the 1970s, when skateboarding was growing popular, Denver skaters began skating it illegally, and graffiti artists tagged it. But it wasn't used for much else.

In June 2021, three middle-schoolers who live in Black's district — Porter Sturno, Brek Price and Ryder Perry — pitched the councilmember on the idea of establishing a skate park in James A. Bible Park, which is located just east of Interstate 25 and north of East Hampden Avenue. Although there are plenty of skate parks in the metro area, southeast Denver is a skate-park desert.

Black balked at the idea, saying that she didn't want to cover up grass with concrete.

But not long after that meeting, Black and some of her aides visited the abandoned Kenwood Dam spillway, which is located near a section of Kennedy Golf Course as well as a soccer complex and a dog park, as part of a search for locations for city-commissioned murals. And that's when Black and her staff had the eureka moment.

"We were like, ‘Wow, this would be an amazing place for a skate park,’” Black recalls.

The Denver Department of Parks and Recreation is exploring the idea and plans to do a feasibility study this year, according to Black. Deputy Parks and Recreation Executive Director Scott Gilmore believes the project could run $10 million, "if you're going to do a skate park and do it right," he adds. “I would think if we would want to do something there, we would want to do it on the scale of the downtown skate park."

The Denver Skatepark, which was completed on Little Raven Street in 2003, has earned an international reputation; proponents of a facility in southeast Denver would be satisfied with something a little less elaborate.

"Right now, we’re basically in the process of getting community support. Local area support is the next important step," says Blackburn. "We’ll have some information at the event about where we’re at in the process and what we’ve done so far, and there will be forms to fill out to show your support for getting a skate park built."

The June 5 event, which will run from 10 a.m. to 2 p.m., will also include live skateboard painting by local graffiti artists, as well as a DJ, a taco truck and gear giveaways, so there's plenty for everyone to enjoy, including non-skaters like Black. "I don't want to get hurt," she admits. "I've got other activities I'd like to do."

Find more information about the event here.
KEEP WESTWORD FREE... Since we started Westword, it has been defined as the free, independent voice of Denver, and we'd like to keep it that way. With local media under siege, it's more important than ever for us to rally support behind funding our local journalism. You can help by participating in our "I Support" program, allowing us to keep offering readers access to our incisive coverage of local news, food and culture with no paywalls.
Make a one-time donation today for as little as $1.