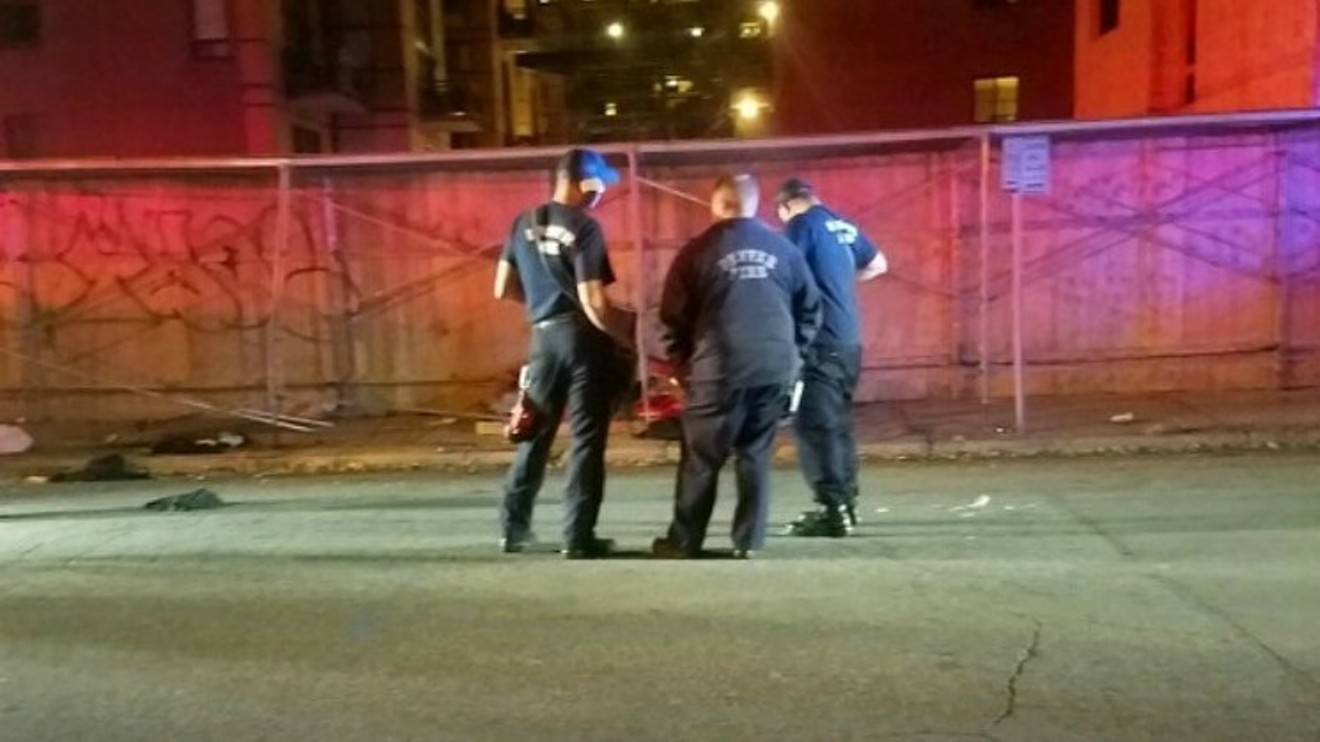 According to Denver Police Department Public Information Officer Doug Schepman, "It's a promising development in the case," which injured six people, including one who was hospitalized at Denver Health with broken ribs and a collapsed lung.

The DPD tweeted about the incident at 9:33 p.m. Thursday, October 18. The message read: "Officers are on-scene at 10th & Broadway in regard to a Serious Injury, Auto/Ped, Hit & Run. Three Pedestrians were struck by the vehicle, which is presently described as a Silver or Grey SUV."

Witnesses with whom Westword spoke early the following morning said the department's injury estimate only took into account the people actually transported to Denver Health. Three others also suffered injuries, albeit ones not serious enough to require hospitalization; several teenagers were among those hurt.

Westword's Chris Walker had written about the encampment that had sprung up along Tenth Avenue at Broadway in "The Story Behind Homeless Camps Sprouting Up in the Golden Triangle." As this September 20 story documented, many of the homeless who typically camped in Civic Center Park had been displaced by events there around Labor Day, leading them to relocate each evening to nearby areas, including the alley and parking lot by Westword and a convenience store across Tenth. As Walker noted, Denver police tended to arrive in the mornings to move campers along, but as many as twenty would return in the evening.

In the weeks after publication of that article, the campers moved about half a block west along Tenth, across the alley to a sidewalk with an overhanging roof built to protect pedestrians from an adjacent construction site, where pricey townhomes are being built. And that's where the crash took place. 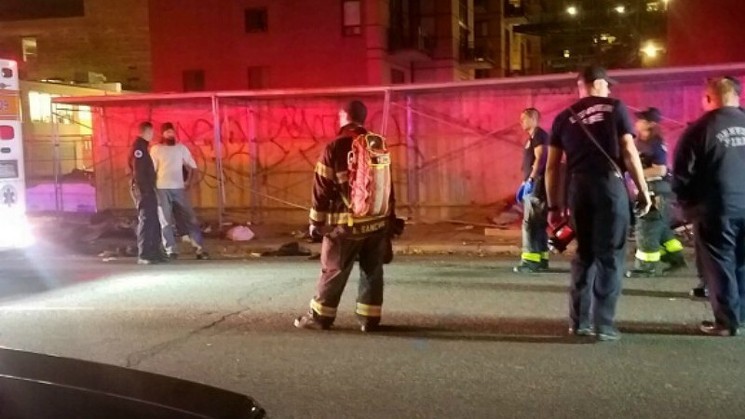 Another photo from the crime scene.
special to Westword
Just prior to 9:30 p.m. on October 18, a vehicle careened in the direction of the sidewalk, one witness said. At first he thought it was a police vehicle coming to roust the campers at an unexpected time. But then he realized it was a silver SUV headed straight toward a large number of people. He pushed as many as he could out of the way, but the vehicle still struck several, including his sister — the person hospitalized with the collapsed lung.

After the impact, the man said, he got close enough to the SUV to pound on the window. While he didn't get much of a look at the driver amid all the confusion, he was able to see him shift into reverse, then squeal around and race off down the alley to the north, behind the convenience store. The man gave chase on foot, but wasn't able to catch sight of a license plate before the SUV disappeared.

The campers on the scene the next morning were clearly shaken by what they'd experienced, and most of them haven't returned to the area. Shortly after 5 a.m. today, October 30, a single individual could be seen sleeping behind the construction site's dumpster, which would presumably offer some protection should another vehicle lose control in the vicinity.

Where did other members of the encampment go? Possibly to a large tent city in the Ballpark neighborhood that was dismantled yesterday by Denver police and representatives from Denver Public Works, allegedly for cleanup purposes.

Meanwhile, the investigation into the October 18 crash continues. According to Denver police PIO Schepman, "We're in the process of doing forensics work to determine definitely whether the vehicle was involved." He adds that no suspect driver has been identified or arrested at this point — but if evidence is found tying the vehicle to the hit-and-run, that could be the next step. "We'll see where the investigation takes us," he adds.

If you have any information about the SUV driver or other aspects of the crime, you're encouraged to contact the Denver Police Department at 720-913-2000 or Crime Stoppers at 720-913-STOP (7867).
KEEP WESTWORD FREE... Since we started Westword, it has been defined as the free, independent voice of Denver, and we'd like to keep it that way. With local media under siege, it's more important than ever for us to rally support behind funding our local journalism. You can help by participating in our "I Support" program, allowing us to keep offering readers access to our incisive coverage of local news, food and culture with no paywalls.
Make a one-time donation today for as little as $1.