The Story Behind Homeless Camps Sprouting Up in the Golden Triangle 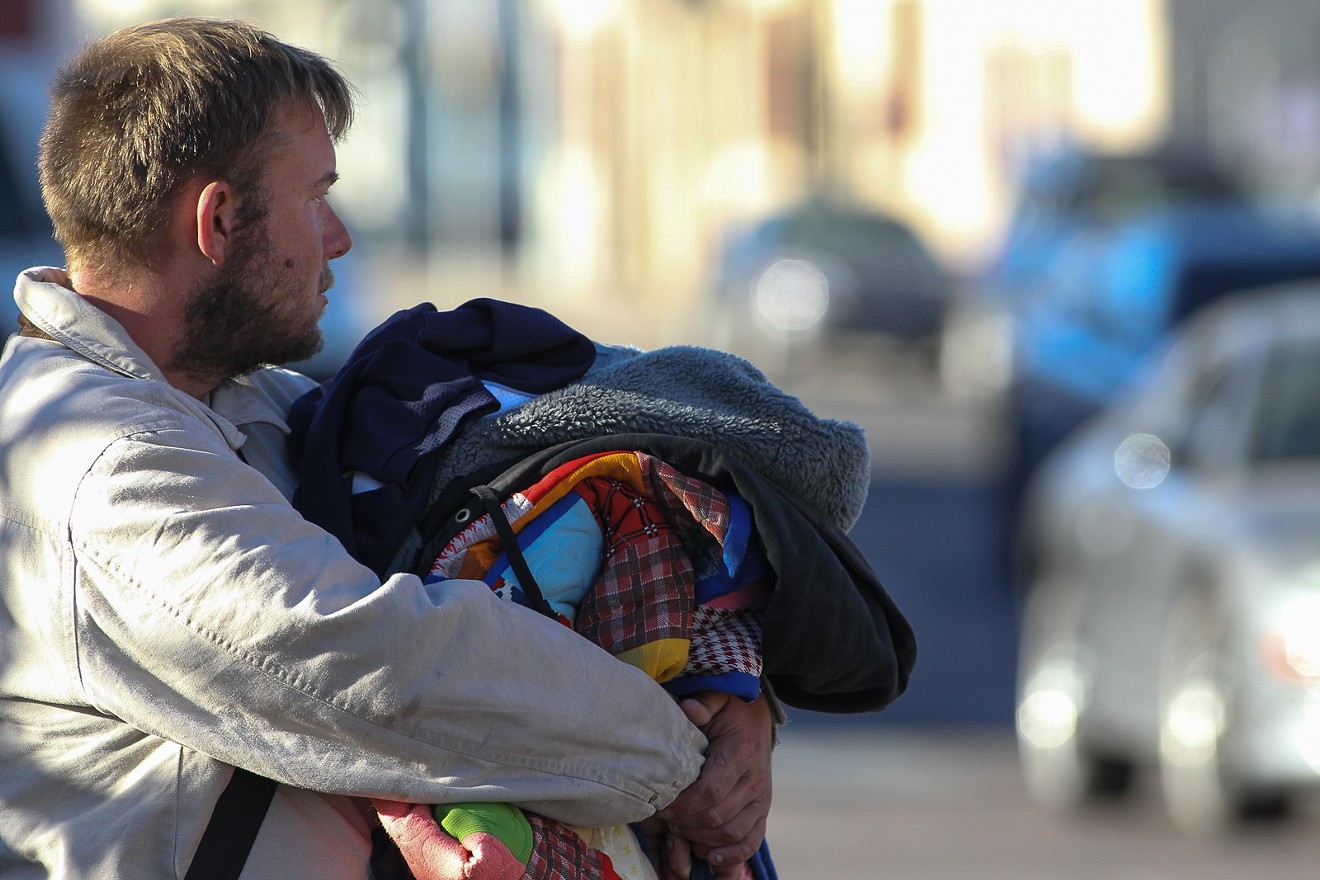 During the past two weeks, a large homeless encampment — as many as twenty people per night — has formed right outside of Westword's building.

Yes, this is unusual.

Generally, the Golden Triangle neighborhood, located just south of Civic Center Park, has its fair share of people experiencing homelessness. That's particularly true along Broadway, including the corner of Tenth Avenue, where Westword's office is located. On an average night, it's not uncommon for one or two people to take refuge in our building's entryway.

But as recently as Tuesday night, the entire sidewalk on Tenth Avenue next to Westword's parking lot was packed with campers, to the extent that individuals ran out of space on the sidewalk and turned the corner into the alleyway behind our building.

We make these remarks not out of disparagement, nor to rat out campers; in fact, the Westword encampment, as we've come to call it, had been known to police for a week before we considered writing this article. The Denver Police Department also needed no help being tipped off about it. This is the corner of Tenth and Broadway we're talking about. With so many people sleeping on the street in such an exposed location, cops noticed the buildup almost as soon as it started around Labor Day. Ever since, there's been a strange song-and-dance between campers and cops, which we've also observed with interest.

Like clockwork, people arrive to set up the encampment at dusk. Police make a few contacts with them during the night, but the encampment generally lasts until dawn, when officers are more forceful in dispersing tents, sleeping bags and quite a few bicycles, until the sidewalk is cleared.


“I was wondering when you guys were going to come out here and talk to us!”

As this continued to unfold, we decided to find out what was going on mere feet from our front door.

The resulting conversations we had with campers, as well as with the DPD, were surprisingly revealing, speaking not just to the specific encampment outside our office, but to general migration patterns and camping strategies used by the homeless community around Civic Center Park and the Golden Triangle.

The first person we spoke to was a 63-year-old man who wished to be identified only as Tony. Around midday on Wednesday, September 12, Tony was resting with a shopping cart by our office. But he was not, he made clear, part of the group camping there each night. Nevertheless, Tony claimed that the reason we were suddenly seeing more encampments along Broadway and Cherry Creek was because there had been a displacement of the homeless at Civic Center Park around Labor Day in anticipation of a string of festivals taking place there, including A Taste of Colorado. Tony was in the same situation, though he declined to say where he was sleeping each night. Before Labor Day, he and scores of others had been finding nooks and crannies in Civic Center Park to sleep in at night. Now they were spread out in surrounding neighborhoods.

With this initial information, we went to DPD spokesman Sonny Jackson. He refutes Tony's claim that there has been any specific enforcement campaigns, or even stepped-up police presence, around Civic Center Park. But Jackson did say the department is accustomed to members of the homeless community changing their camping locations whenever Civic Center Park is being used for large festivals.

"Generally, when there's festivals and things in the park, people tend to move out,” Jackson says. “Why they move and where they go, I don't know. But when festivals come, the park basically gets fenced in."

Queried about the strategy behind DPD's contacts with the Westword encampment since Labor Day, Jackson says that the department prioritizes contacts based on how many complaints it receives. "We are very complaint-driven,” he says. “When we receive a complaint, we will talk to outreach teams to get [the homeless] connected with services. Our main objective is to get them connected to services."

But what if people don't want to be connected to services, like shelters?

That appears to be the case for the campers next to our office. On Friday, September 14, we spoke with five of the campers who've been staying on our block. Most of the conversation was carried by a middle-aged woman who goes by Mia and claimed to be the lead organizer of the encampment (a claim that the four young men she was with did not refute).

“I was wondering when you guys were going to come out here and talk to us!” Mia said brightly. “I thought about going in your building a couple times and saying, 'Hey, Westword! Don't you realize there's a bunch of homeless people suddenly sleeping outside?'”

Mia, it turned out, was more than happy to explain how the Westword encampment came to be — as well as a lot more about the homeless community in the Golden Triangle.

Like Tony, she said that recent festivals and police patrols around Civic Center Park had displaced people who'd been sleeping in the park prior to Labor Day. This, she claims, has had the effect of breaking up a cohesive community of around 100 people experiencing homelessness that congregate around the park.

That population, Mia explained, is completely distinct and apart from the homeless who congregate around the Denver Rescue Mission near Park Avenue West and Lawrence Street. The reason comes down to gang ties, as well as a broader cultural difference. Many of the homeless around the Golden Triangle are young and, as Mia claims, identify as “gutter punks.”

When she said this, the young men around her, two of whom were very stoned, grinned and nodded in agreement.

Mia went on. Gutter-punk culture, she said, has both positive and negative connotations. On the negative side, there is an organized crime group called the Gutter Punk Crew, which was the target of a DPD crackdown and 99-count indictment against nineteen individuals in 2017. Some of the more abrasive gutter punks also caused trouble along the 16th Street Mall, including a series of well-publicized assaults on pedestrians during the summer of 2016. One video in particular, of an assault on a businessman, went viral (it's below). Mayor Hancock famously labeled the culprits “urban travelers” and tripled DPD patrols along the Mall, with taxpayers footing a $396,000 bill. That wasn't enough for the Downtown Denver Partnership, which hired additional private security guards.


“Two years ago, that's when all the gutter punks came to Civic Center Park,” Mia continued.

As she explained it, this population tends to avoid the Denver Rescue Mission because some members of the homeless community in the Ballpark neighborhood have ties to other gangs that don't tolerate gutter punks and gutter-punk culture.

What is that culture? In general, Mia said that gutter punks are younger people seeking an alternative way of living. Some have crossed over from Juggalo culture, she said. They've rejected norms, have made stands to carve out places for themselves like Stoner Hill, and live freely.

“They're mostly kids who've been out here — some of them since they've been six or seven — many of them having met through foster homes.” Mia said. “Everyone knows each other. Everyone watches each others' stuff. It's very supportive.”

As for Mia's role?

“I'm like a mom, making sure my kids are safe and not running amok," Mia said. “I set rules, like no stealing from stores. We talk to store owners when we camp nearby, and usually they're pretty nice and understanding.”

The other thing Mia said she makes sure of is that sidewalks are cleaned up the morning after camping. Asked about a couple of instances when Westword staffers noticed needles and trash strewn along the sidewalk on Tenth Avenue, Mia blamed the police.

She said police officers had hastily broken up their encampment a couple of mornings, not allowing enough time for occupants to clean up after themselves. “A lot of the people who sleep here have warrants, and as soon as the cops roll up, I tell them to get out of there,” she explained. "I'm a ferociously, savagely protective mother." 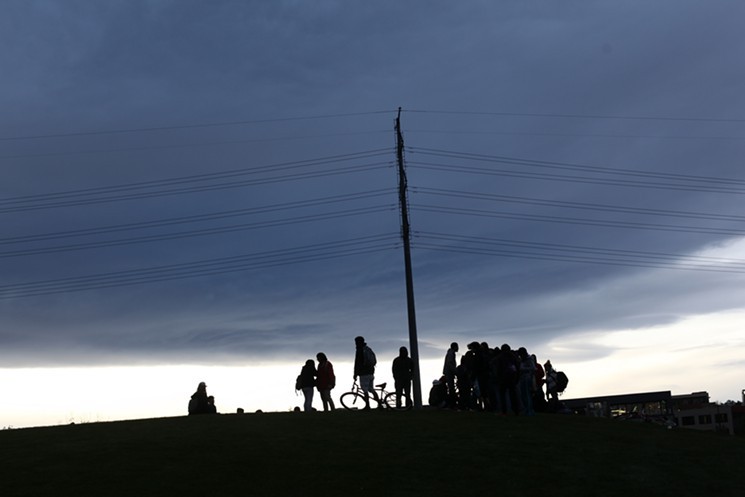 Youth gathered on "Stoner Hill" in 2016.
Andrew Kenney
Since Labor Day, Mia said that she and about ten to fifteen others have camped in two locations. First they slept next to the Denver Central Library at night. But when police harassment there became too much, they moved next to Westword's office.

“The typical lifespan of a camp is ten days. And in this spot, we're on day eleven,” she said on Friday, referring to the Westword location. “There's no way in hell that they'll keep letting us stay here much longer."

Mia has already identified her next two encampment locations. They are close by Westword's office, but Mia requested that we not reveal any specifics about them.

Asked why she and others have declined to sleep in overnight shelters run by nonprofits or the city, Mia was indignant. “Are you kidding me?” she snapped. “They're unsafe. People fight. And you get your stuff stolen every time you stay there. The people who work there can barely keep it under control.”

Mia sees sleeping on the streets as less risky, because she can surround herself with people she trusts, including men (whom she'd be separated from in a shelter).

As for long-term plans? Mia said that she and others will probably return to Civic Center Park after things calm down.

“It's our right to be there,” she stated.
KEEP WESTWORD FREE... Since we started Westword, it has been defined as the free, independent voice of Denver, and we'd like to keep it that way. With local media under siege, it's more important than ever for us to rally support behind funding our local journalism. You can help by participating in our "I Support" program, allowing us to keep offering readers access to our incisive coverage of local news, food and culture with no paywalls.
Make a one-time donation today for as little as $1.