Shutterstock.com/Thaiview
Should the oil and gas industry have a role in education? In early August, five oil and gas operators paid for two workshops in Weld County designed to give teachers an in-depth understanding of the industrial process. Nearly forty K-12 teachers participated in the industry-driven program, which included tours of fracking, drilling and production sites.

The companies lent staff and donated educational materials for use in the classroom in a partnership with the University of Northern Colorado and the Poudre Learning Center, which builds workshops for students and teachers in northern Colorado. Among the companies involved were Noble Energy, the second-largest producer of oil and natural gas in the state, as well as Anadarko Petroleum — the company responsible for the home explosion that killed two in Firestone last May.

The goal of the program was to get teachers information about the oil and gas industry so that they can teach that subject in their own classrooms.

"How do we get teachers to be knowledgeable about what is going on, [so they] can answer some of those tough questions about our energy, and where we are now and where we might be headed?" says Ray Tschillard, executive director of the Poudre Learning Center. "As a teacher, now they can relay that information in a more fact-based and experienced-based way."

Weld County leads the state in production of both oil and natural gas, and residents say that they see drilling rigs in every direction on the plains.

"Up here in Weld County, it is a part of our everyday life," Tschillard continues. "You might be following a tanker to school, you might have wells going in by your house or your school, and it is still kind of a mystery."

So Tschillard approached oil and gas companies, including one that had applied to drill on the Poudre Learning Center's nature conservation area, with the idea of educating teachers through two weeklong experience-based programs. The companies agreed, offering several sites and personnel to answer questions for the teachers turned students.

Shutterstock.com/pan denim
The program included hours-long field trips to sites on both ends of the industrial process: from drilling and fracking sites, which are designed to crack subterranean shale formations and unlock the fossil fuels within, to production and completion facilities, where oil and natural gas are separated from junk liquids and processed for use in homes and other industrial processes like plastics plants.

Teachers who participated in the program also received $200 toward courses at the University of Northern Colorado and $125 to buy educational resources for classroom teaching — all funded by the oil and gas operators.

SRC Energy, which led the industry participation in the program, did not respond to repeated requests for comment from Westword, nor did Anadarko Petroleum.

Emily Bradley, a fifth-grade teacher at a STEM school in Windsor, was at the workshop for elementary students. For Bradley, the experience helped her clarify lifelong questions about the oil and gas industry and will allow her to teach in a more in-depth way about oil and gas in her classroom.

"I grew up on the plains, so I didn’t know a lot more than farming and that there were those big things — that there was a lot of oil and gas up in this area, in northern Colorado," says Bradley. "But I didn’t really know what was going on behind those [sound] walls. So getting to see the difference — and honestly, I know this sounds so ignorant — but the difference between fracking and just drilling, I thought that they were all one process."

She says that the experience was positive, and that she appreciated the work that the oil and gas companies put in. But she also applauded the program for its neutrality.

"They did a fantastic job about making it impartial and just educating people," she says. "I don’t know if I had an opinion about [oil and gas] before — honestly, I don’t think that I did. I had a lot of questions and I was uninformed, so I like to be informed before I can make an opinion." 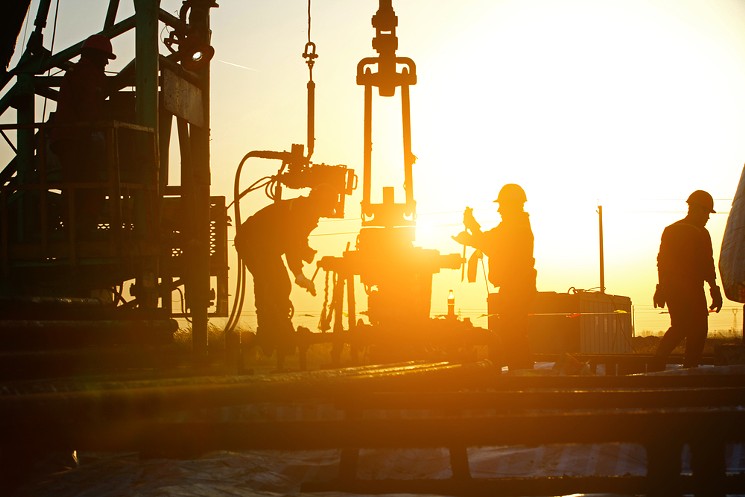 Shutterstock.com/pan denim
Bradley says that her fifth-grade curriculum touches on oil and gas extraction along with renewable energy sources, but she hopes to teach more about the former now that she has a better understanding of the process.

In surveys collected by Tschillard after the program's end, he says that the teachers overwhelmingly approved of the program. "Almost every one of them said on the surveys that it had opened their eyes. It really changed the way they look," he remembers. "And they weren’t necessarily against oil and gas when they came, but they really had a better understanding of the whole process."

Tschillard is also wary of the controversial nature of the subject. "I know that we might receive criticism, because you don’t think about oil and gas as environmentally friendly," he says. "But our society is all about trade-offs, and they are trying to do this in the safest way that they can possibly do it, and we saw a lot of signs of that."

He is also satisfied that the program's content went beyond the typical messages espoused by industry during election seasons, like this TV advertisement.

Jeremy Nichols, the climate and energy program director at WildEarth Guardians, says that he is not familiar with this particular program but is wary of industry's attempts to influence public opinion.

"In my experience, oil and gas companies propagate information that helps their bottom line and makes them look good," says Nichols, a prominent voice in Colorado's contentious debate over drilling. "They will not acknowledge fault, risks, uncertainty or mistakes. Even where disasters strike, their strategies are to deny, obfuscate and, frankly, lie.

"It builds familiarity and rapport with the public, plain and simple," Nichols continues. "The more people learn about the oil and gas industry from the perspective of industry itself, the more forgiving and accepting they'll be of their misbehavior and their dangers. It's a slippery slope. Once oil and gas money and presence show up in
education, how can you be sure there is not an objective motivation on their part?  Again, they're a profit-making enterprise, and that speaks volumes to their agenda."

Tschillard says the program was a success — so much so that he hopes to do it again next summer. The Poudre Learning Center is also launching a renewable-energy learning facility that will include solar and geothermal technologies, and is working with a local solar-energy company to create a similar program.
KEEP WESTWORD FREE... Since we started Westword, it has been defined as the free, independent voice of Denver, and we'd like to keep it that way. With local media under siege, it's more important than ever for us to rally support behind funding our local journalism. You can help by participating in our "I Support" program, allowing us to keep offering readers access to our incisive coverage of local news, food and culture with no paywalls.
Make a one-time donation today for as little as $1.