President Joe Biden will visit NREL today. NREL
President Joe Biden is coming to Denver today, for the first time since he was elected. He really should visit the 17th Street headquarters of Dominion Voting Systems, which former crackhead/current crackpot Mike Lindell and other wingnuts continue to insist stole the election for the Democrats.

But instead, he'll head to the National Energy Research Laboratory, a popular stop for presidents who want to push renewable energy for four decades. In 2009, President Barack Obama came to town to sign a $787 billion economic-stimulus bill to hype solar energy; as his vice president, Biden visited NREL in 2011, when he termed the network of eighteen national labs America's "crown jewels."

But the lab's biggest fan was President Jimmy Carter.

In March 1977, Carter announced that what was then dubbed the Solar Energy Research Institute would be located in Colorado. In addition to its stunning scenery, laid-back lifestyle and sunny weather, the state boasted a governor who was pushing hard for the project. In fact, Governor Dick Lamm had made winning the lab a top priority of his administration: He assigned a full-time staff member in his office to the effort, made at least two trips to D.C. to tout Colorado, and included a letter in the state's official proposal, submitted in July 1976. "It was a big deal to me," Lamm told Westword writer Sam Levin in 2012. "It really [showed] that we could put together an economic-development thrust that was first-rate. ... I've been convinced since the '60s that it was foolish to rely on foreign oil. I really was very passionate about alternative energies." 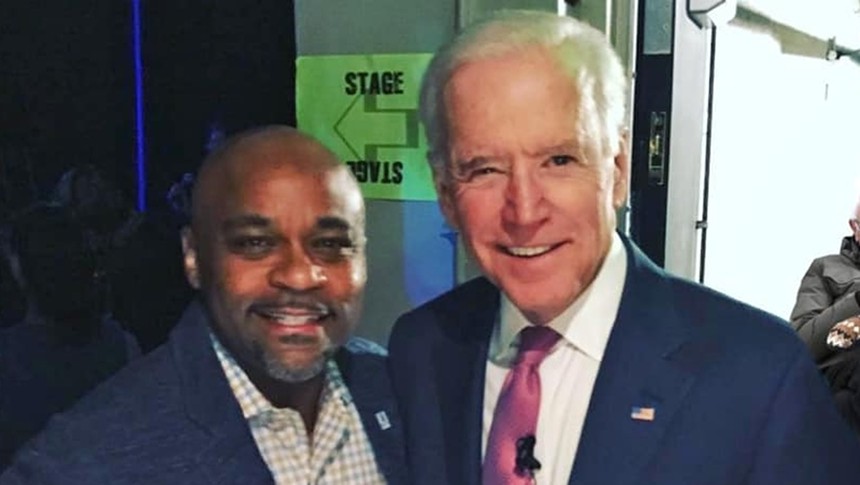 Mayor Michael Hancock will be on hand to meet President Joe Biden on September 14.
denver.gov
Forty-five years later, Biden is, too. At today's speech at an NREL facility in Arvada, he's expected to discuss how his bipartisan Build Back Better Agenda will help the climate crisis, support infrastructure modernization, and strengthen the country’s resilience while improving environmental justice.


Carter's subjects weren't quite as sweeping on that day in early May 1978 when he spoke in Golden, where the future federal facility would be based. But his stops in the area were far more expansive, as outlined in his presidential diary. The peanut farmer-turned-president landed at the old Stapleton Airport, stayed at the now-disappeared Cosmopolitan Hotel downtown and, accompanied by then-Senator Gary Hart, paid a visit to Rick's Cafe, a swingin'-singles joint in Cherry Creek. The reason? Rick's used solar power to heat its dishwasher.

Sandy Widener, a co-founder of Westword, which had just published its first issue nine months earlier, was on hand to document the scene. Here's her account from May 1978, titled "A Peanut Colada, Mr. President?"

A Secret Service agent checking out the chosen dinner spot for Jimmy Carter's Colorado visit to hype solar energy on Sunday, May 3, stopped in astonishment at the entrance to Rick's Cafe. "Is it always like this?" he asked the manager, eyeing the crush of swaying singles. The agent had stopped by on Friday night, commonly known as "Zoo Night," when Denver's young social set meets at the restaurant, jamming the place to capacity.

The White House decision to eat at Rick's was based on the restaurant's status as one of the few in the area to use solar power, although at Rick's it's used primarily to heat up the dishwasher and to heat one dining room.

The people at Rick's found out about one week before the president was planning a visit, but they got used to the idea in a hurry after the Secret Service started moving in. "It's real Dick Tracy to me," sighed manager Paul Hutchens.

The agents came in every day for the week previous to the presidential visit, "and you'd know they were there because of their beepers," according to Kathy Kuperman, who waited on the President. "Once I had this guy sit at my table — hog my table — for four hours, just staring at the rafters. He didn't move."

Another waitress reportedly was asked by a Secret Service agent to sit down and have a drink. "I've got to work," she said. As the story goes, the Secret Serviceman told her, "Listen, honey, if that's what you're worried about, we could clear out this place in five minutes."

For the fateful meal, the restaurant closed at 4. At 5:45, Rick's 90 guests — mostly employees and friends of the restaurant — crowded into a level several feet above the main floor designed for about 75, and began drinking.

Outside, protestors protesting everything from Panama treaties to proposed sales of fighter planes to the Saudis to the American Agriculture movement chanted on the street across from Rick's. On the next corner the folks at the Perry Butler building were having a little barbecue to welcome the President. And those on the upper level at Rick's were waving in glee at the disgruntled news photographers who were not allowed in. (National press corps and selected local news media were allowed in during the salad course for a few minutes.)

"A lot of girls really got off on the press taking their pictures from outside on the street," said bartender Sam Towne.

Although some of the guests got "wasted" early in the evening, according to Ron Stone, who helped bus the presidential table, when Carter came in about an hour later the guests quieted down and applauded. "They didn't gawk as much as I expected," Kuperman said. The president made a hit when he shook hands with those in the upper level and told them he'd rather stay up there with them.

The only hitch occurred when those on the upper level learned they couldn't descend to the lower — where the restrooms were located. With Secret Service escort, however, several — including an owner — crossed no-man's land to safety.

Once settled downstairs, the president dined on a hot crab and avocado sandwich ("We're proud of our food. We're not serving him caviar because we don't serve caviar," Hutchens said defiantly) and discussed solar energy, although Kuperman said she witnessed a major exchange between Carter and energy czar James Schlesinger on the subject of bean sprouts. "They're very good for you," Kuperman said Schlesinger told Carter.

Busboy Stephen Bottomly, a member of the Divine Light Mission, who waited on the presidential party, said of Carter, "He was a real person, like you or me. He needs love. As a matter of fact, he looked like he needs a lot more love," he said.

Although Carter's meal was decided in advance, Kuperman was determined to serve him the restaurant's pumpkin cheesecake. "They said, 'For dessert, the president is going to have...' and I said, 'Can I pick it?'" she said. "'I want him to go back to Washington and tell everybody what good pumpkin cheesecake he had.'" Kuperman's own dessert came soon after Carter's departure, when to celebrate her 25th birthday that day, the restaurant gave her — and the co-owner who also had a birthday — a cake inscribed "Love from Jimmy and the gang."

After the President left, "the place just came unglued," Bottomly said. When the restaurant reopened at 9 that night, some employees were still eating the cake.

Towne said a Secret Service agent who stayed to have a drink at the bar asked why the employees didn't want to shove a piece of cake in Carter's face. When Towne said he didn't know why he'd want to, the agent said as long as Towne wasn't interested in killing Carter, he could do anything to him and Carter wouldn't care.

Since the presidential visit, Kuperman said, the curious have been coming into the restaurant asking what the president had to eat, so they could eat it too. But there are no plans as yet to rename the hot crab and avocado sandwich.

Biden will not be stopping for a peanut colada at a local watering hole today; his agenda has him moving on this afternoon for visits to two more western states.

In any case, Rick's is long gone; its former home at 80 South Madison Street is now occupied by Chopper's Sports Grill. Sadly, Sandy Widener is gone, too; she and her husband, civic planner and early Lamm strategist John Parr, and their elder daughter, Chase, were killed in a tragic car accident over a decade ago. Lamm himself passed on just last month. And the Divine Light Mission, which once followed the fifteen-year-old Guru Maharaj Ji, has gone dark in Denver.

But the sun is still shining in metro Denver, where Biden will visit NREL today, renewing hopes for ways to fight climate change in a world that's much hotter than it was four decades ago.
KEEP WESTWORD FREE... Since we started Westword, it has been defined as the free, independent voice of Denver, and we'd like to keep it that way. With local media under siege, it's more important than ever for us to rally support behind funding our local journalism. You can help by participating in our "I Support" program, allowing us to keep offering readers access to our incisive coverage of local news, food and culture with no paywalls.
Make a one-time donation today for as little as $1.