Inside Campaign to Protect National Monuments From Trump, Congress

An image from Bear Ears National Monument in Utah as featured in a new public service announcement from the Center for Western Priorities. Center for Western Priorities via YouTube
The Denver-based Center for Western Priorities has launched a national ad campaign aimed at preventing national monuments from being stripped of their protected status by the Trump administration. The threat is exemplified by the efforts of numerous Utah legislators, who are currently lobbying Trump and Interior Secretary Ryan Zinke to wipe out Bear Ears National Monument — a prospect that recently led Boulder's Outdoor Retailer Association to announce that its annual Outdoor Retailer shows will pull out of Salt Lake City and seek a new home, perhaps in Colorado.

According to CWP executive director Jen Rokala, the biggest motivating factors behind the $500,000 campaign, which has already launched in Washington, D.C., and began running in Colorado yesterday, April 10, are "lawmakers who want to make changes or eliminate the Antiquities Act" — specifically, the American Antiquities Act of 1906, which became law during the presidency of Theodore Roosevelt. A key passage from the act reads:


Be it enacted...that the President of the United States is hereby authorized, in his discretion, to declare by public proclamation historic landmarks, historic and prehistoric structures, and other objects of historic or scientific interest that are situated upon the lands owned or controlled by the Government of the United States to be national monuments, and may reserve as a part thereof parcels of land, the limits of which in all cases shall be confined to the smallest area compatible with proper care and management of the objects to be protected.

As Rokala notes, "the Act has been used by presidents, both Democrats and Republicans, to protect important cultural, heritage and scientific sites. It's been used to protect landscapes such as the Colorado National Monument, but also areas of historical importance, like the Stonewall National Monument, which President Obama designated in New York City last year." (Stonewall marks the site of a 1969 uprising that was key to the fight for LGBTQ rights.) She adds, "The Grand Canyon was initially designated through the Antiquities Act before Congress made it a national park. So this campaign is intended to educate the public about what the Act does and why it's important."

The controversy over Bear Ears offers a case in point, Rokala believes. 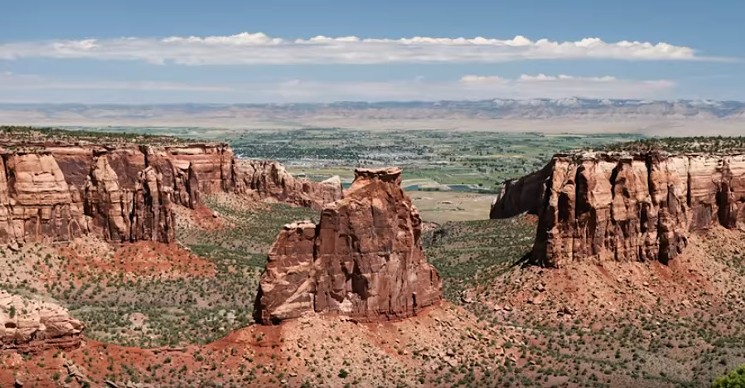 The Colorado National Monument near Grand Junction, as seen in the Center for Western Priorities PSA.
Center for Western Priorities via YouTube
"The Utah delegation has been openly hostile to the Antiquities Act," she says. "Rob Bishop, the chairman, called it an 'evil act,' which doesn't make any sense to me given that so many spectacular landscapes in Utah were originally protected by the Act. Utah uses national parks to drive tourism, but you've got the Utah delegation attacking the Antiquities Act. So there's definitely cognitive dissonance on their part."

At the same time, Rokala stresses that the new campaign isn't only about politicians in Utah.

"There are some great champions for public lands in the Colorado delegation," she maintains, "and Senator Michael Bennet is at the top of that list. But Congressman Scott Tipton isn't the biggest champion, and neither is Congressman Doug Lamborn. Neither of them are supportive of these designations, and Congressman Lamborn was opposed to Browns Canyon, which was designated as a national monument a couple of years ago, even though it had broad public and bipartisan support."

Thus far, the Trump administration hasn't acted on Bear Ears, and if Zinke stays true to a recent comment cited by Rokala, there may be reason for at least a modicum of optimism.

Browns Canyon was designated as a national monument by President Barack Obama in 2015.
Joshua Duplechian/Trout Unlimited
"During his confirmation hearings, he talked about wanting to serve like Teddy Roosevelt," she allows. "He said Teddy Roosevelt is one of his heroes and someone he wants to model his service after — and Teddy Roosevelt is one of the greatest conservation presidents in the history of our country. We have the Antiquities Act because of him. So even though the Utah delegation is pushing him, we hope Secretary Zinke serves in the way Teddy Roosevelt did."

Roosevelt's image appears in the ad, as do shots from the Colorado National Monument and Bear Ears — and Rokala believes that the scenery underscores why the public should reject any assault on the Antiquities Act.

"We have these special places because presidents have had the foresight to protect them," she says. "We need to make sure future presidents continue to have that tool — because there's a true threat to the Antiquities Act."

The ad is expected to continue rolling out to markets from Nevada to South Carolina over the coming weeks. Here it is: