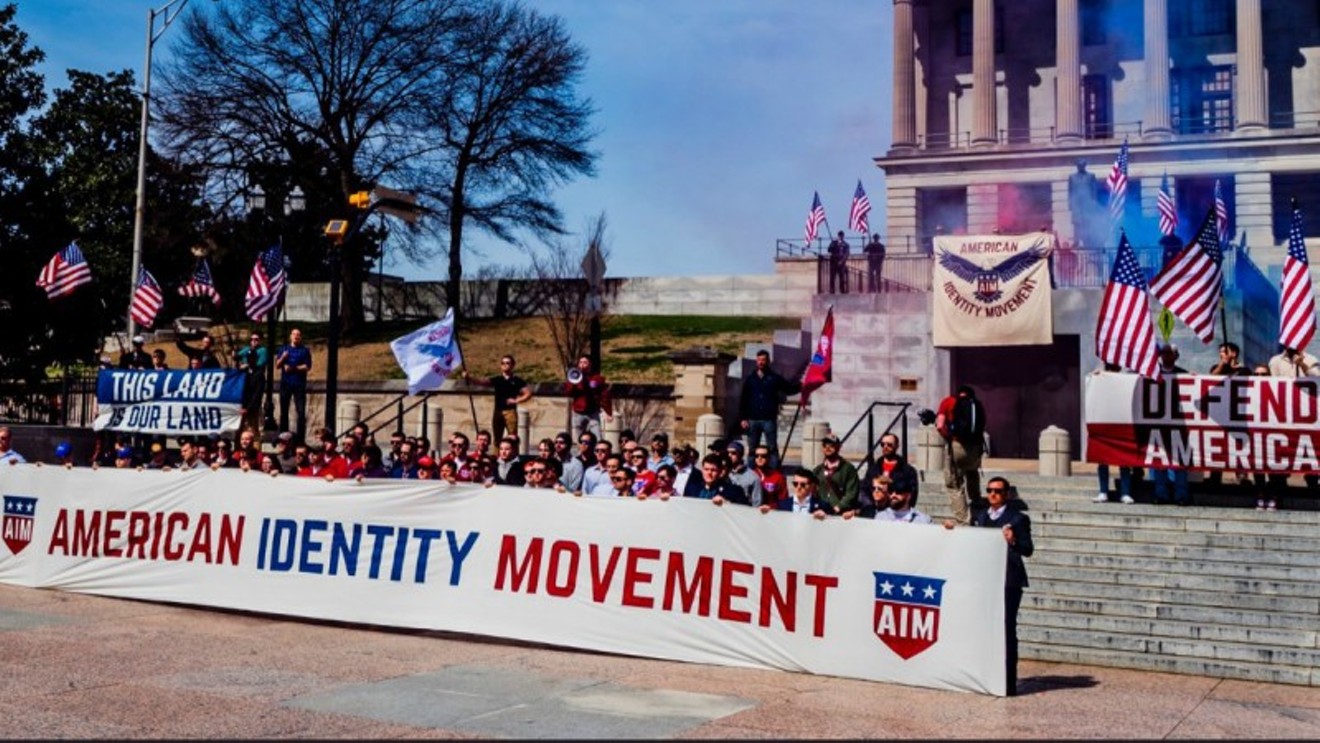 A photo shared by the rebranded Identity Evropa on Twitter. Twitter
Identity Evropa, a racist group whose propaganda war in Colorado last summer ramped up in December with a disturbing call to "DEFEND THE ROCKIES," is dead, at least officially. The organization has rebranded as the American Identity Movement in a transparent attempt to distance itself from communication obtained and leaked last week by Unicorn Riot that firmly established its ties to neo-Nazi activities, including the August 2017 riot in Charlottesville, Virginia, where an anti-fascist demonstrator was killed.

But the shaky and unconvincing March 8 launch of AIM (the attempt to hijack the acronym of the American Indian Movement adds insult to injury) won't lower the heat directed at its members by those fighting against white-supremacist extremism on the Front Range, including an underground collective that worked to remove Identity Evropa messaging — and was instrumental in getting Twitter to suspend the IE account prior to the name change.

"We'll be just as vigilant on the American Identity Movement as we've been on Identity Evropa," says a woman working in the network, who asked to remain anonymous.

Moreover, colleges on Colorado's Front Range, which have been among the primary targets for Identity Evropa placards and stickers, are taking a more aggressive stance against the outfit and others like it. Among them is Front Range Community College, whose Westminster campus was posterized by Identity Evropa on at least three occasions: in June 2017, August 2018 and this past January.

"Front Range Community College is committed to creating a diverse, inclusive and welcoming environment for anyone who wants to learn," notes FRCC president Andrew Dorsey in a statement provided to Westword. "Principles of white supremacy, exclusion or discrimination conflict with these values. We want all our students and employees to feel safe and that they belong here."

There's never really been any doubt about where Identity Evropa's true sentiments lie, thanks to the clumsiness of its attempts to disguise its xenophobia. Indeed, Westword published an interview with IE spokesperson Sam Harrington in January in part because his desperately flawed efforts at spin more clearly revealed the bigotry at the alliance's core. But there was at least one person deluded enough to think Harrington's prevarications were effective: In a message contained within the Unicorn Riot leak, a member said he had gotten a positive response from a Colorado newspaper article.

T-shirts emblazoned with the new American Identity Movement brand.
Twitter
The new American Identity Movement Twitter account — which at this writing remains online — already has around 2,300 followers, but only a handful of tweets have been issued thus far and one promise has already been broken. On March 8, IE leader Patrick Casey shared a statement that tried to blame Identity Evropa's flaws on others ("Ultimately it was an organization not of my own creation — one held down by baggage accumulated before my tenure") and found him pledging to divulge more about his new creation in a Periscope video that would be available to stream that evening. But no such video appeared that night or since.

Yesterday, however, the movement tweeted links to accounts on Facebook and Instagram, among other services. They're currently live. Whether they'll last is another question.

Starving Identity Evropa of its access to social media was a key part of the plan instituted by the secret Colorado network. "We waged a hot and heavy campaign to get them off Twitter," the female activist says. "We persistently hammered away at that. Every time any of us saw something, multiple people complained about it, and if it was still there a few days later, we'd complain about it again until it was gone."

Against this backdrop, Unicorn Riot's efforts attracted the attention of more mainstream press outlets — among them the Daily Beast, which concentrated on alleged links between IE and the Republican Party, and the Denver Post, which cited an Anti-Defamation League study showing that Colorado had the third-highest concentration of white-supremacist propaganda assaults in the country, behind only California and Texas.

The network member is thrilled by the brighter spotlight on the former Identity Evropa. In her view, "it makes it much harder" for its latest iteration to fly below the radar, especially if its ability to spread its poison online is severely restricted.

Not that anyone thinks the battle is over. The woman says that while IE has been quieter since January, the Proud Boys, another alt-right group that pretends to hold less vile philosophies than it actually does, has filled the vacuum by actively trolling progressive politicians and public figures, among other things. The network's troops are tracking them closely even as they are on alert to see if the American Identity Movement can get untracked.

The same thing is going on at Front Range Community College. Jessica Peterson, FRCC's public-relations director, says that while there currently is no investigation into the identity of those who put up the Identity Evropa stickers on the campus, "our security is well aware of the situation. The last time stickers were put up on campus, they were taken down within ten minutes or so."
KEEP WESTWORD FREE... Since we started Westword, it has been defined as the free, independent voice of Denver, and we'd like to keep it that way. With local media under siege, it's more important than ever for us to rally support behind funding our local journalism. You can help by participating in our "I Support" program, allowing us to keep offering readers access to our incisive coverage of local news, food and culture with no paywalls.
Make a one-time donation today for as little as $1.