Fascist Groups' Propaganda War on Denver and the Front Range 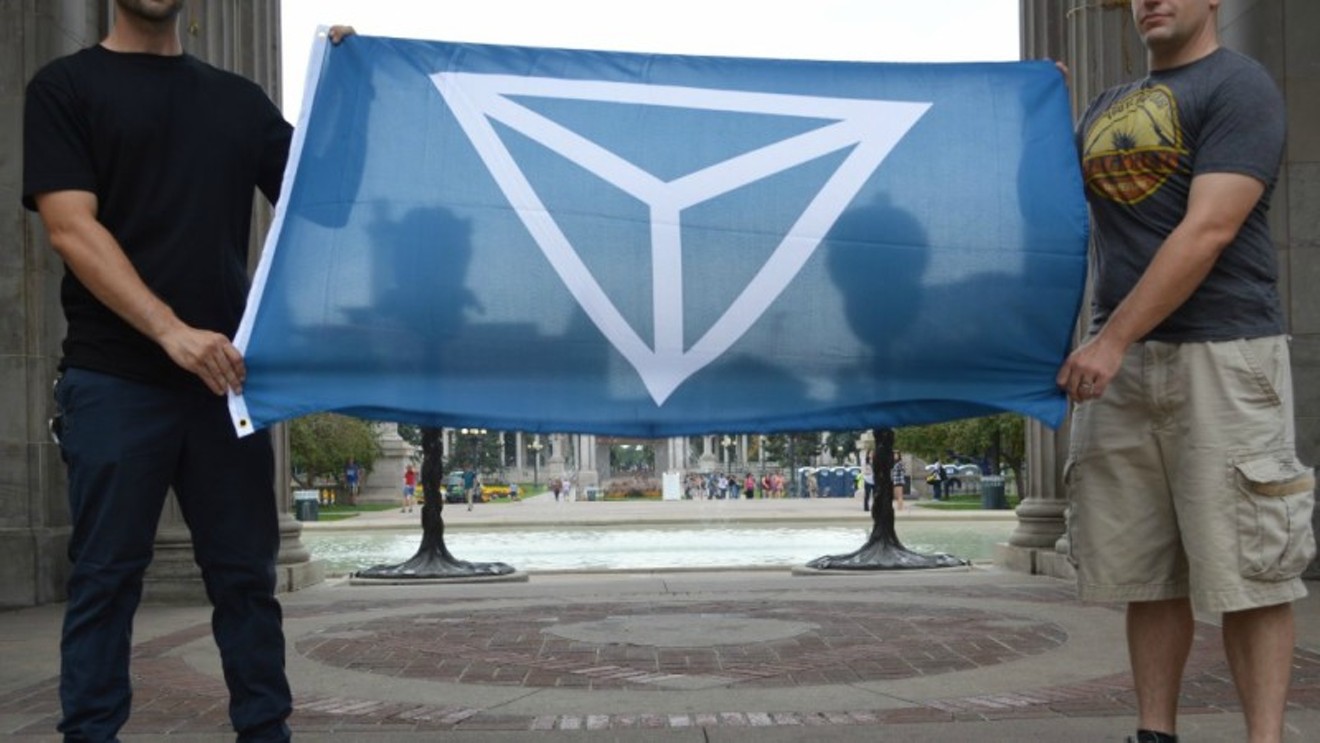 This photo of two men displaying the Identity Evropa flag at Denver's Civic Center Park was tweeted by the group last month. @identityevropa
Over the summer, Identity Evropa and Patriot Front, a pair of fascist groups aligned with the white-supremacist movement, have been waging a propaganda war in Denver, Colorado Springs, Fort Collins and other urban-corridor locations by way of stickers, banners and photos shared on Twitter accounts affiliated with their national organizations.

Among those fighting these efforts are members of Colorado Springs Anti-Fascists, whose Rosa Luxemburg (a pseudonym) confirms that CSAF responses have had to ramp up to match the pace of the hate messages proliferating along the Front Range.

"We've definitely been busy the last few months," notes Luxemburg, corresponding via email. "We've basically got a quick-reaction network of folks across the state working to identify and remove fascist postings in the major metro area."

There have been plenty of the latter. The photo at the top of this post, the original of which was cropped to mask the identity of the two men in it, is among several images from Denver tweeted by Identity Evropa, which, according to the Southern Poverty Law Center, is "at the forefront of the racist 'alt-right's' effort to recruit white, college-aged men and transform them into the fashionable new face of white nationalism." 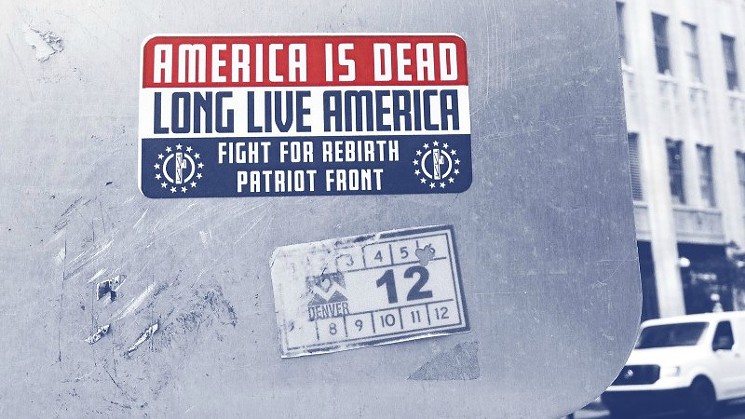 A Patriot Front sticker on a Denver street, as seen in a photo tweeted by the group in recent weeks.
@PatriotFront_
Instead of "denigrating people of color," the SPLC continues, "the campus-based organization focuses on raising white racial consciousness, building community based on shared racial identity and intellectualizing white-supremacist ideology."

The SPLC adds that "Identity Evropa members insist they’re not racist, but 'identitarians' who are interested in preserving Western culture."

Despite this spin, the center has branded the outfit a hate group, one of 21 currently active in the state. And while Patriot Front, which the SPLC describes as a "far-right splinter group born from the fallout over Charlottesville," isn't on the latest list for Colorado, it's clearly making inroads here, as indicated by this post's second photo, an image from Denver tweeted in late August.

Getting the word out about these collectives is among the goals of Colorado Springs Anti-Fascists. 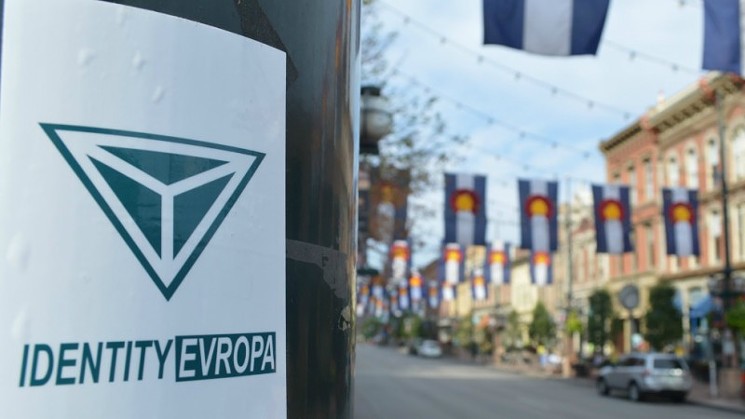 Another photo tweeted in August on the Identity Evropa account — this one showing a sticker emblazoned with the group's logo in Larimer Square.
@identityevropa
As noted by Luxemburg, the CSAF has recently "identified and outed Colorado participants in national fascist events, as well as trying to identify the guy behind the Identity Evropa postings" by sharing photos of the suspected perpetrator online.

Regarding Patriot Front, Luxemburg acknowledges that "this is speculation, but we wouldn't be surprised if the folks behind it are just rebranded members of the Traditionalist Worker Party — Matt Heimbach's group, which imploded after his domestic-violence arrest shortly after their Colorado chapter got their asses kicked at CSU in Fort Collins."

Luxemburg is referencing a neo-Nazi clash in February following a speech by Charlie Kirk, founder and executive director of Turning Point USA. A scathing op-ed published by the Rocky Mountain Collegian, CSU's student newspaper, charged Turning Point USA with having a "history of condoning misogyny and rape apologia in Colorado" that the piece connects to the Traditionalist Worker Party due to "similar doctrines of inequality, separatism and hatred."

TWP minions were at the center of the violence at Colorado State University, another target of recent fascist agitprop. A gallery of pics marked by the Identity Evropa logo at the CSU campus was also tweeted in recent days.

According to Luxemberg, the two fascist groups have been "engaging in a lot of 'guerilla activism' — so banner drops, postings and pop-up photo shoots." 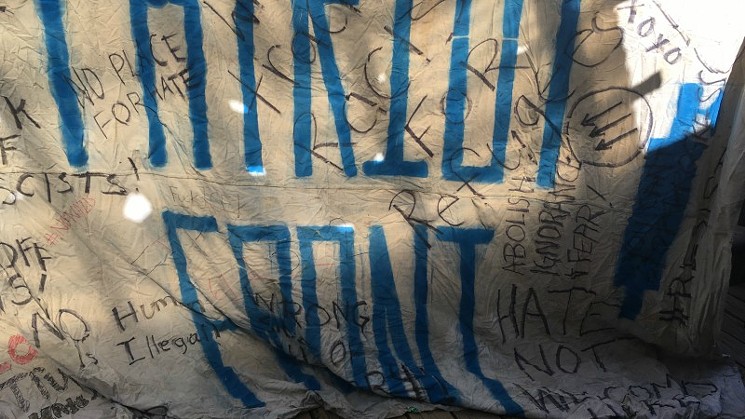 The seized Patriot Front banner, now covered with anti-fascist messages.
Colorado Springs Anti-Fascists
Such displays "are designed to be difficult to effectively disrupt, but they are pretty easy to clean up after," she maintains. "Most of the stuff they post is torn down within a couple of hours."

An example involves a Patriot Front banner that was hung on an overpass in Monument, just north of Colorado Springs. Luxemberg reveals that CSAF forces grabbed the banner and "used it as part of a fundraiser/benefit show for the Colorado Immigrant Rights Coalition."

Specifically, Luxemburg goes on, "we charged people $1 to write snarky messages on it and helped raise over $800 for CIRC." (See the photo above.)

Lately, anti-fascist organizations have been fighting stickers with stickers.

And there seem to be more fronts in Colorado every day.
KEEP WESTWORD FREE... Since we started Westword, it has been defined as the free, independent voice of Denver, and we'd like to keep it that way. With local media under siege, it's more important than ever for us to rally support behind funding our local journalism. You can help by participating in our "I Support" program, allowing us to keep offering readers access to our incisive coverage of local news, food and culture with no paywalls.
Make a one-time donation today for as little as $1.