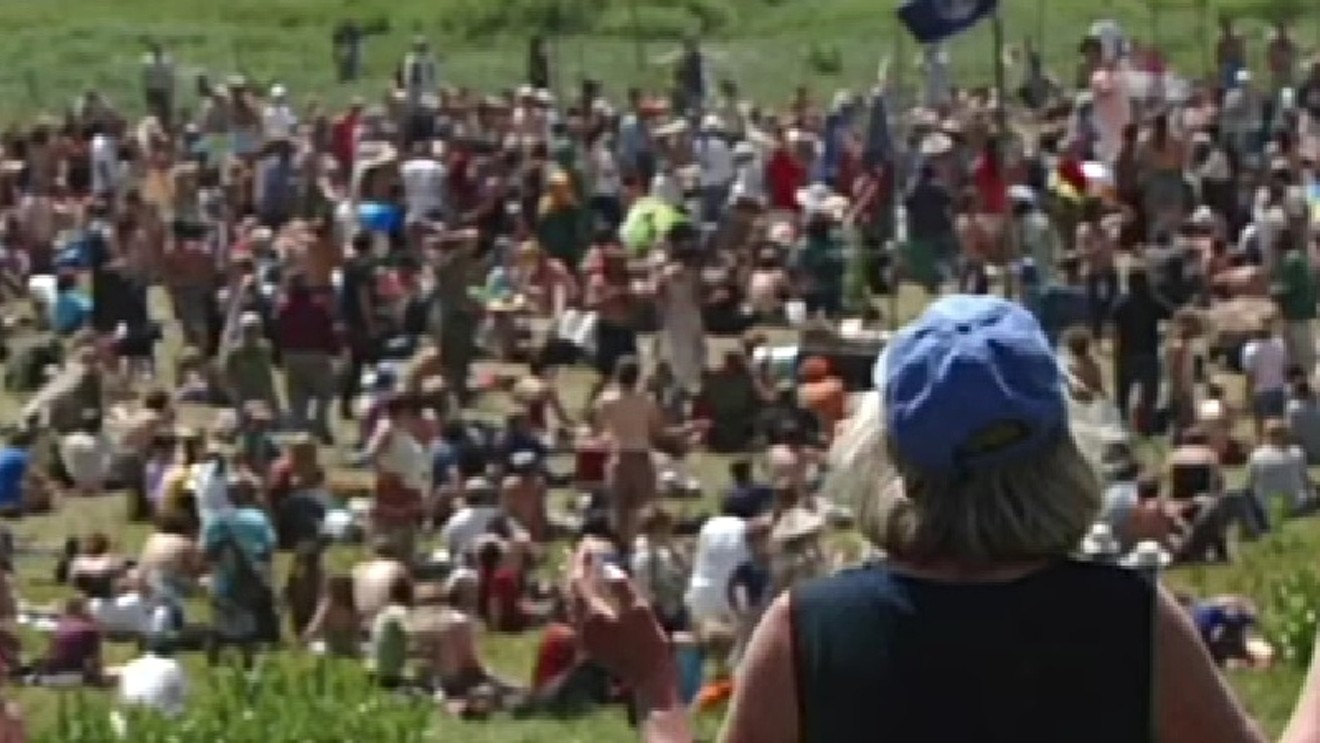 The Rainbow Family gathering got plenty of local and national media coverage. Denver7 via YouTube
The fiftieth anniversary gathering of the Rainbow Family in the Adams Park area of Routt County's Hahns Peak/Bears Ears Ranger District is just ending, so the final numbers aren't in yet. But according to the latest count from the U.S. Forest Service, 451 so-called "law-enforcement actions" have been racked up by an estimated 9,100 attendees.

Most of the offenses appear to have been minor, and many were handled on site by Michael E. Hegarty, a Denver-based U.S. District Court magistrate judge for the District of Colorado. According to the Washington Post, Hegarty processed dozens of people ticketed for misdemeanors at "a makeshift federal courtroom in a dirt lot" — a setup some members of the Family saw as harassment.

The national coverage underscored the unusual nature of the event, as well as the preparatory efforts of the U.S. Forest Service, which last month issued a primer describing the Rainbow Family as "a loose-knit group of people from throughout the United States and other countries who gather annually on a national forest."

Colorado has been a longtime favorite of the group. The U.S. Forest Service points out that the inaugural Rainbow Family gathering took place in 1972 near Strawberry Lake in the Arapaho National Forest. Since then, members have assembled in the state many times, but given the anticipated size and scope of this year's event, the feds created what was dubbed a "National Rainbow Incident Management Team," consisting of around sixty law enforcement agents and Forest Service staffers, to handle it.

Last week, Hilary Markin, the unit's public-information officer, calculated that around 3,400 attendees had already shown up as of June 29, with 191 enforcement actions to that point, including "incident reports, written warnings, violation notices and arrests." Among the activities of concern cited by Markin were "illegal or socially unacceptable behaviors" that might include "public nudity, civil disobedience, drug and alcohol abuse, confrontations between Rainbows and locals, abandoned or disabled vehicles, and traffic congestion and parking several hundred to several thousand vehicles."

Markin also voiced worries about land-management issues that led to a large part of California Park in the Routt National Forest being temporarily closed.

"The Forest Service requires a special use permit for every public group of 75 or more people conducting a meeting or event on National Forest System lands," Markin said. "The Rainbow Family has consistently refused to comply with the permit process during national gatherings, since they claim to have no leaders and no one member who can speak for the group or sign a permit on behalf of the Family."

Even so, she added, "The agency also works with the Family to adhere to a resource protection plan in lieu of a special use permit to protect the health and safety of individuals at the incident and in the surrounding community, to ensure sensitive resources are protected, to minimize any environmental damage and to coordinate post-event cleanup and rehabilitation of the event site." The gathering officially ends on July 7, and some attendees will stay to help clear the site.

The most recent update from Markin, issued on July 4, the peak date for attendance, noted that many of the 451 law enforcement actions so far have dealt with illegal drugs; fentanyl, mushrooms, cocaine, LSD, methamphetamines and heroin are among the substances mentioned.

The Post story noted confusion about marijuana use, which is legal in most of Colorado, but not on federal land; it quoted attendees complaining that such citations were often preceded by tiny offenses such as "an air freshener hanging from the rearview mirror" or "a bike rack blocking the license plate."

Likewise, most of the videos that have surfaced about this year's rendezvous show benign activities, such as this impromptu wrestling match: