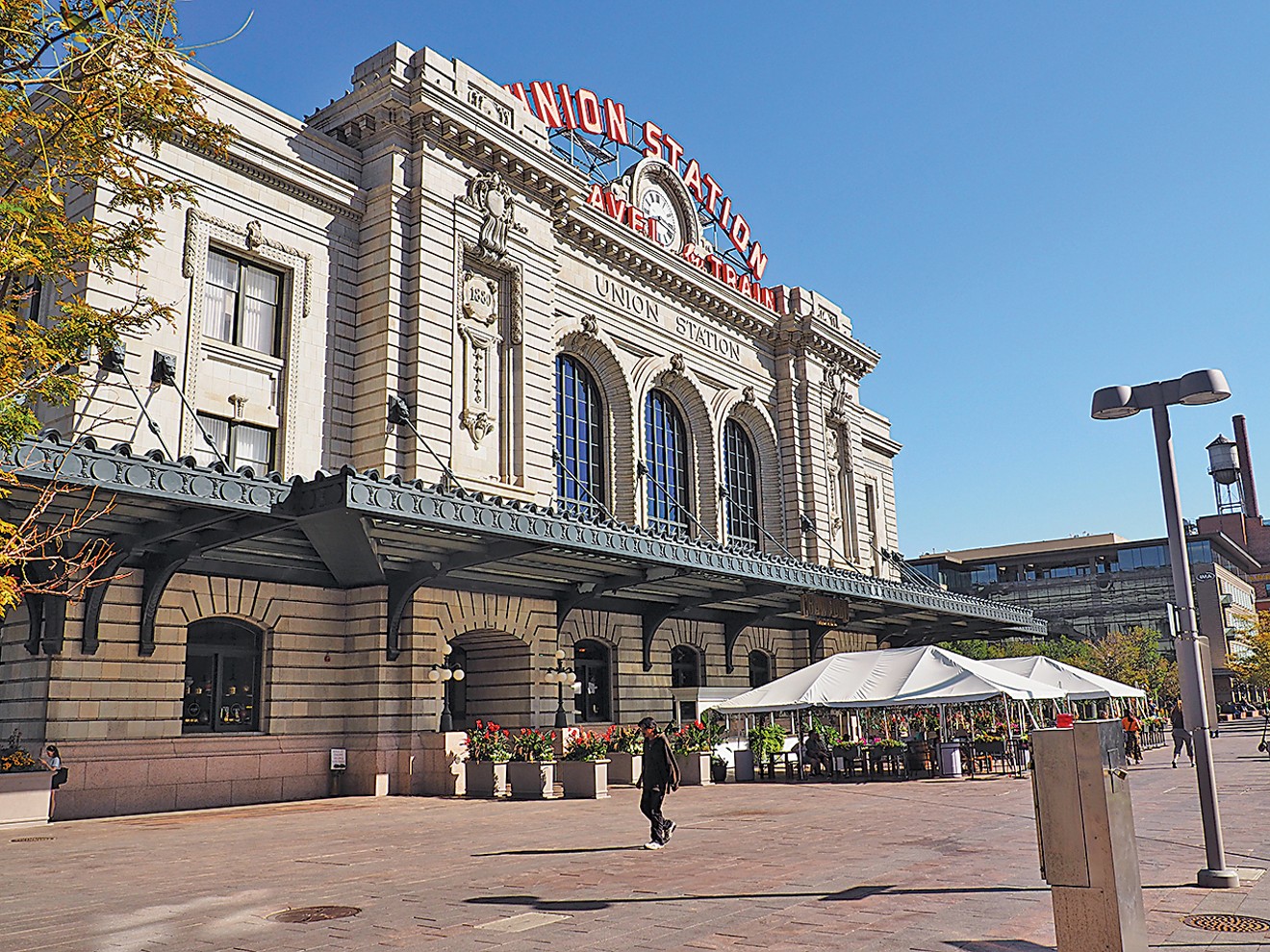 The bus terminal behind Union Station was the focus of concerns in December. Westword
On August 24, Denver City Council's Safety, Housing, Education & Homelessness Committee heard from both the city and RTD about updates to safety and security at Union Station.

In December 2021, problems with crime, particularly drug use, came to a head at the bus terminal behind Union Station. In response to alarms from both the drivers' union and Mayor Michael Hancock, the Denver Police Department took action, stepping up enforcement for drug offenses. The Union Station bathrooms were closed while they were renovated to provide more security; RTD removed benches and access to electrical outlets. And the changes aren't over.

As Evan Dreyer, deputy chief of staff for Hancock, told committee members, fall brings cold weather, and the city is aware that problems at the bus terminal could rise as people try to shelter there. The city also recognizes that cracking down at Union Station could simply shift the problem elsewhere. According to Armando Saldate, Denver's executive director of public safety, his agency is already noticing a new hot spot at Colfax and Broadway, near Civic Center Park — whose closure in 2021 sent many people to Union Station.

Ramped-up policing isn’t the only method the city has deployed at Union Station. The Denver Department of Public Health and Environment stationed Wellness Winnie, its mobile support unit, at the station from 9 a.m. to noon every Wednesday from April 16 through July.

“Compassion,” Dreyer said. “That is the overriding and guiding principle that we have tried to bring to all of this for enforcement and for public health outreach, as well.”

Bob McDonald, executive director of the DDPHE, said that Wellness Winnie engaged with 726 people during its time at Union Station; of those, 139 accepted care management and connections to resources. A consistent schedule allowed staffers to build trust with people who needed help, then assist them with problems that couldn’t be solved with just one interaction, such as obtaining vital records needed to get a job. McDonald plans to strategize on how to build similar connections in the future to help more people accept resources.

Denver City Council President Jamie Torres and committee chair Paul Kashmann both agreed that there's a need to expand services for people hoping to recover from drug addiction. Improving awareness of and access to those services will work better in the long run than simply arresting people, they said.

But in the meantime, Saldate offered the committee an update on arrest statistics at Union Station, noting that the DPD has begun placing area restrictions on repeat offenders, with the court ordering an individual not to commit the same crime (usually a drug offense, in this case) in the same area again. As city attorneys explained, they’re usually sent to the same judge, and there’s a record linking the incidents together and allowing room for additional charges.

While Saldate said that most interactions at the terminal start with the officers asking people about their welfare, he highlighted the importance of policing to prevent violence, noting that officers have seized seventeen firearms in the area so far in 2022. 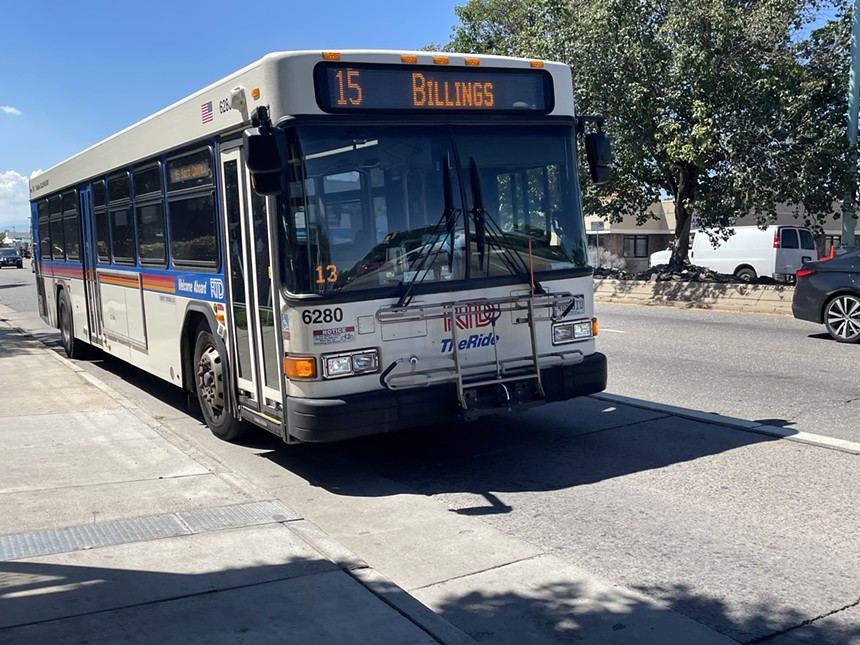 The 15 bus headed east on Colfax.
Catie Cheshire
Councilmember Amanda Sawyer asked if an excessive percentage of RTD’s policing resources were being devoted to Union Station when so much of the city, particularly the 15 bus along Colfax, has needs, too.

In response, Debra Johnson, general manager and CEO of RTD, noted that in addition to RTD's 21 sworn officers, it employs secondary police officers from the DPD as well as police departments in Aurora, Lakewood and Thornton.

On August 23, RTD swore Joel Fitzgerald in as head of the district’s police force. Most recently, Fitzgerald was with the police department in Waterloo, Iowa, where he faced criticisms of his leadership, which he attributed to people taking issue with his race.

“One of the reasons, I think, why I was brought in was to expand our police department and to take on more responsibilities,” he said at the meeting. “We're having conversations with the public-safety personnel of Denver and all of our surrounding areas to discuss how that will look. But for now, yes, 21 is not a sufficient amount.”

Currently on each shift, RTD deploys two officers between Civic Center, Union Station and the 16th Street Mall; two that assist throughout the rest of the city; and three that are dedicated to bus routes, typically spending most of their time on the 15's route. RTD officers only have arrest power in the Union Station area.

According to Johnson, the Union Station bus terminal will continue to see updates along with those already in place based on a Crime Prevention Through Environmental Design analysis that RTD worked on with the DPD earlier this year.

While the bus terminal bathrooms are still closed, they could open by the end of the month barring supply-chain problems, she said; the elevator area near the bus terminal bathrooms is now open. RTD has already installed pre-recorded announcements about appropriate behavior, enhanced directional signage to help with pedestrian flow, and added better lighting. After security noticed people gathering between the sliding glass doors at the Walnut and Chestnut pavilions, RTD plans to eliminate the possibility of congregating there, Johnson added.

RTD hopes to transform the bus terminal from what is now an open facility allowing people in regardless of their ticket status to something more like the systems in New York, San Francisco and Chicago, where a fare is required to access the area where passengers get on the vehicles. To that end, RTD is modernizing its fare-collection system by moving to account-based ticketing. “RTD still has ticket vending machines, which is the antiquated form of technology,” Johnson said. “With anything, we want to make it easy for people — and the ultimate line, without quoting Capital One, is we need to be able to use anything that's in our wallets when we're trying to look to utilize transit.”

“There is great effort being put in, and I believe it's paying off,” Kashmann said. “I do still worry about the people. I don't worry about the drug dealers. I don't worry about the criminals, but the people who sought warmth and shelter there — I continue to worry about them, and I know we're working to get them services as well.”
KEEP WESTWORD FREE... Since we started Westword, it has been defined as the free, independent voice of Denver, and we'd like to keep it that way. With local media under siege, it's more important than ever for us to rally support behind funding our local journalism. You can help by participating in our "I Support" program, allowing us to keep offering readers access to our incisive coverage of local news, food and culture with no paywalls.
Make a one-time donation today for as little as $1.