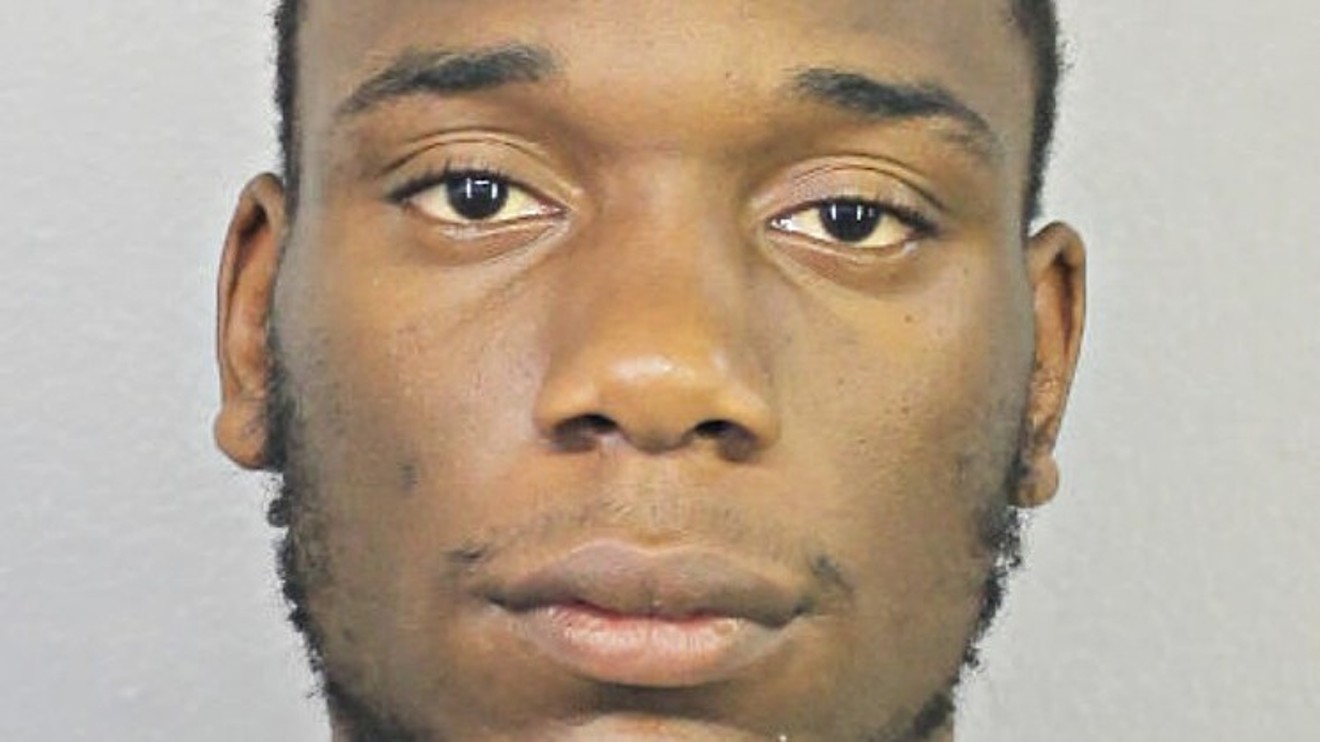 A 2017 booking photo of Sam Brunelus. Eagle County Sheriff's Office
While opioid addiction is widely understood to constitute a national crisis, there's disagreement about how best to tackle the problem, with some advocates arguing in favor of a health-care focus and others backing get-tough law enforcement tactics. But the latter approach fell short in the high-profile case of Sam Brunelus, who was busted on suspicion of manslaughter in the deaths of two men to whom he allegedly provided heroin laced with carfentanil, an extremely powerful synthetic opioid best known as an elephant tranquilizer.

Brunelus has a lengthy rap sheet. But he's now a free man after an Eagle County judge determined that there wasn't enough evidence to put him on trial.

As we've reported, Brunelus was busted in the Florida community of Deerfield on July 11 regarding his alleged connection to Michael Martinez, 26, and Camillo Sanchez, 30, who were found dead at a home in the El Jebel area on March 24. Alexander Raywood, a third man with Martinez and Sanchez, was revived thanks to multiple doses of the anti-overdose medication Narcan.

In April, the Colorado Bureau of Investigation did tests on pills found at the scene. The main ingredient was heroin, but they were also cut with carfentanil, prompting the Eagle County Sheriff's Office to put out an alert about the opioid that quotes Chuck Rosenberg, acting administrator of the Drug Enforcement Administration.

"Carfentanil is surfacing in more and more communities," Rosenberg said. "We see it on the streets, often disguised as heroin. It is crazy dangerous. Synthetics such as fentanyl and carfentanil can kill you."

Carfentanil is one hundred times more potent than fentanyl, says an addiction expert.
centeronaddiction.org
For more information about carfentanil, we reached out to Amy Lowe, clinical director of outpatient services for Arapahoe House, Colorado's largest alcohol and drug rehab treatment center; Lowe previously spoke to us for a September 2016 post that looked at why Spice is popular in a state with legal marijuana. She theorized that carfentanil may have played a role in even more fatal overdoses beyond Martinez and Sanchez in the state, thereby quietly contributing to the shocking rise of heroin deaths in Denver and Colorado as a whole.

"It's being cut into heroin to increase its potency," Lowe said of the substance. "A lot of people don't know what they're getting, and I would guess that our astounding overdose statistics would include drugs like this one," even if carfentanil isn't specifically cited in the autopsies. After all, carfentanil is relatively new to Colorado, and some coroners may not even be looking for it yet.

Far better known is fentanyl, another synthetic opiate with which carfentanil is frequently associated. Fentanyl has been the object of some notorious thefts by hospital personnel. The most recent case involved surgical tech Rocky Allen, whose needle-swapping led to approximately 3,000 patients at Swedish Medical Center being tested for hepatitis B and C, as well as HIV. Prior to the Allen incident, Rose Medical Center operating-room technician Kristen Parker was given a thirty-year prison sentence for infecting some hospital patients with hepatitis C over her own fenanyl-fueled needle-swapping — and last year, nurse Kim Burgans was arrested for allegedly stealing fentanyl at a hospital in Frisco.

But while fentanyl is a favorite of addicts, it's actually weak in comparison with carfentanil, which is "a hundred times more potent than fentanyl, and a thousand times more potent than morphine," Lowe pointed out. "Fentanyl is usually prescribed to people with chronic pain conditions, or people who are dying, to use as a dermal patch, while carfentanil actually comes in powder form. And one fragment of carfentanil does fifty times more than what a fentanyl patch would do."

Indeed, the Canadian Centre for Addiction reveals that a human being can be killed by an amount of carfentanil equivalent to a single grain of salt.

Enter Brunelus, who was linked to the pills that killed Martinez and Sanchez after a months-long investigation conducted by the Eagle County Sheriff's Office in conjunction with the Fort Lauderdale Police Department's special-investigations unit and the Drug Enforcement Administration.

A 2015 Sam Brunelus mug shot.
Florida.arrests.org
Brunelus posed for more than his share of mug shots between the years 2014 and 2017. He was busted on July 26, 2014, in Boca Raton for cocaine possession; May 25, 2015, in Coral Springs for the same charge, plus suspicion of trying to sell cocaine, reckless driving and a probation violation; and November 30, 2015, in Palm Beach for possessing and attempting to sell cocaine.

Still, this background wasn't enough to convince Eagle County District Court Judge Fred Gannett that the case against Brunelus in regard to Martinez and Sanchez should move forward. According to the Vail Daily, prosecutors maintained that Sanchez and a man from Florida texted back and forth to arrange a heroin purchase, and Brunelus was copied. But the physical description of the person suspected to be Brunelus as "a black man with a cell phone...in South Florida" struck Rick Douglas, Brunelus's attorney, as being insufficient in the extreme.

The Daily quotes Douglas as saying, "The only evidence is that there was a black guy in South Florida carrying a phone. Mr. Brunelus did not own that phone.... A black man in South Florida with a phone is not enough. It cannot be enough."

He was right, but District Attorney Bruce Brown isn't interpreting the judge's dismissal as an argument against targeting individuals like Brunelus as a way to combat the opioid scourge. In a statement, Brown said, "These cases are a high priority for me. We have an overdose epidemic on our hands, and sitting idly by and watching young people die is not an option for this office or the Eagle County Sheriff's Office. This ruling is a setback, but there will be no surrender from this quarter."

He added: "We are exploring all alternatives in terms of accountability for the person who supplied fatal doses of carfentanyl to the decedents. Justice is important on these matters."