The stand where the Civil War soldier stood...until last year. Patricia Calhoun
On November 29, descendants of the Cheyenne and Arapaho tribal members who were slaughtered by Colonel John Chivington and his men on that date back in 1864 will again gather on the banks of Sand Creek.

But after their ceremony honoring the victims of the Sand Creek Massacre, the descendants will not follow the 185-mile route that Chivington's volunteers took back to Denver, carrying souvenirs of their grisly work that included body parts taken from some of the 200 elderly men, women and children they'd killed that day. Just as the survivors of the massacre fled the territory of Colorado, they will return to their reservations outside of the state: to Montana (Northern Cheyenne Tribe), to Wyoming (Northern Arapaho Tribe) and to Oklahoma (Cheyenne & Arapaho Tribes of Oklahoma).

Since 1999 — the same year that the Colorado Legislature agreed to place a plaque beneath the circa 1909 Civil War Monument outside the State Capitol explaining that what had happened at Sand Creek was not a "battle," unlike the other engagements commemorated on the monument, but an actual massacre, as determined by the U.S. Congress back in 1865 — descendants of the tragedy have commemorated the Sand Creek Massacre with the Healing Run, heading from what today is the Sand Creek Massacre National Historic Site outside of Eads to the Capitol, where they hold ceremonies and offer speeches, remembering their ancestors and reminding us of one of the darkest chapters in Colorado's past. 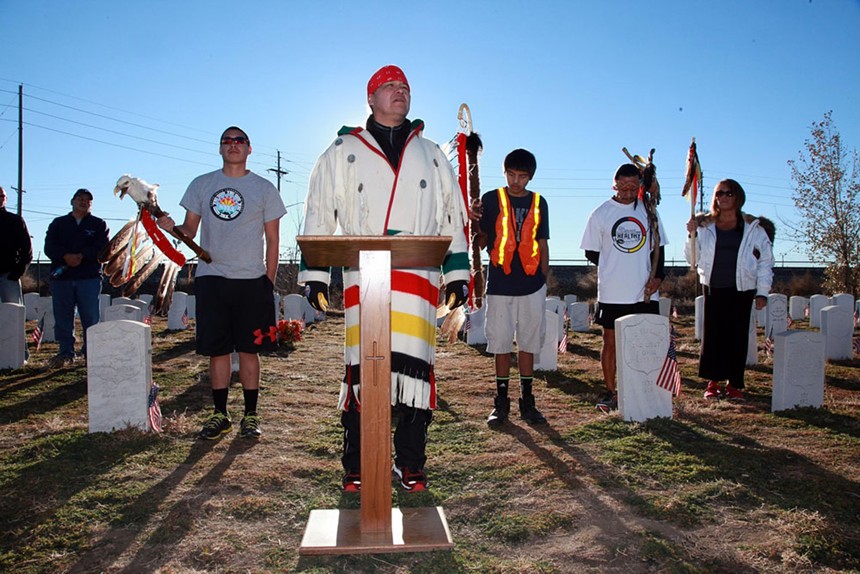 Otto Braided Hair at Riverside Cemetery during the 2013 Sand Creek Massacre Healing Run.
Anthony Camera
But there will be no official run this year (although a few past participants plan to make the trip), and the ceremonies will be private, both at the site and on the reservations. "The Cheyenne and Arapaho people have been hit hard by the COVID-19 pandemic," reports Otto Braided Hair, a Northern Cheyenne descendent and organizer of the almost-annual run from its start. "We have lost many elders, and committee members want to avoid risk of viral exposure to our youth and elders." His reservation also weathered dangerous wildfires this past summer.

But now, more than ever, people should remember what happened on November 29, 1864 — and in the days, weeks, months and years afterward. "People should not forget those men, women and children that were camped peacefully at Sand Creek over 150 years ago," says Gail Ridgley, a Northern Arapaho descendant. "Please remember that those lives that were cut short were once flesh and blood like you and me. They are still our family members and should be honored even in death." 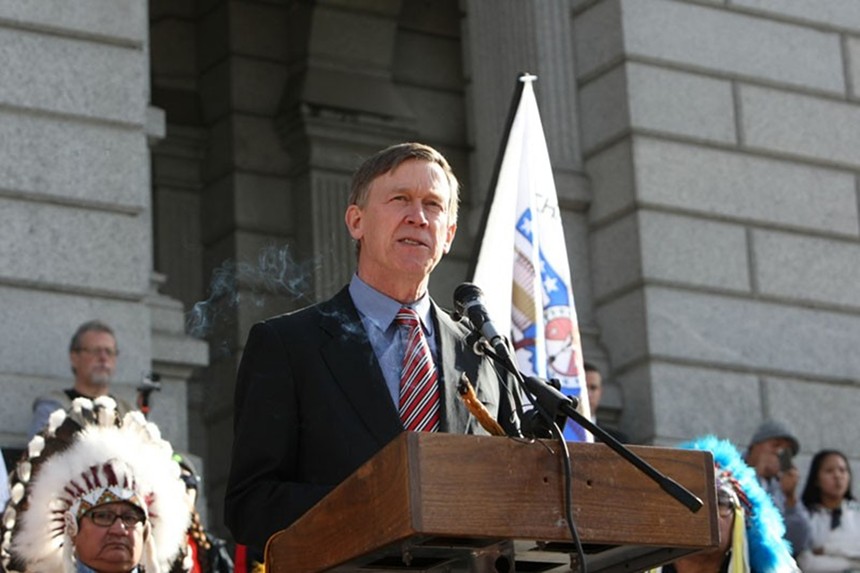 On behalf of the State of Colorado, Governor John Hickenlooper apologizes for the Sand Creek Massacre in 2014.
Brandon Marshall
At the end of the healing run in 2014, on the 150th anniversary of the Sand Creek Massacre, then-Governor John Hickenlooper did just that when he stood on the steps of the Capitol. As he spoke, Hickenlooper told how Black Kettle, the chief who'd gone with Major Edward Wynkoop to meet with Territorial Governor John Evans just two months before, believed that the camp at Sand Creek was under the protection of the U.S. government. He'd raised the American flag, the white flag; the soldiers fired anyway. Hickenlooper recalled how Chief White Antelope, one of eleven chiefs killed that day, had stood his ground and sung the song of the final journey: "Nothing lives forever, only the earth and the mountains." He read from letters written by Captain Silas Soule, telling Wynkoop that he'd refused to participate in the horrors that day, and recounted how Soule had testified before congressional committees before he was assassinated on the streets of Denver. He spoke of the "deep moral failure" of Evans, who'd had to resign his position but was later honored with a street, a town, a mountain named after him. "We should not be afraid to criticize and condemn," Hickenlooper said. And then he apologized to the tribes on behalf of the State of Colorado.


After that apology, Hickenlooper pushed for the installation of a monument at the Capitol that would commemorate the victims of the massacre, a move that subsequently stalled in Capitol Building Advisory Committee meetings during debates regarding its location. The tribes wanted the statue on the west side, near the Civil War Monument, facing the mountains, while some members of the committee wanted it in a less conspicuous space — on the east, where "The Closing Era," a statue showing a Native American, had been consigned a century before. Or perhaps down the hill, by the Vietnam veterans' monument. 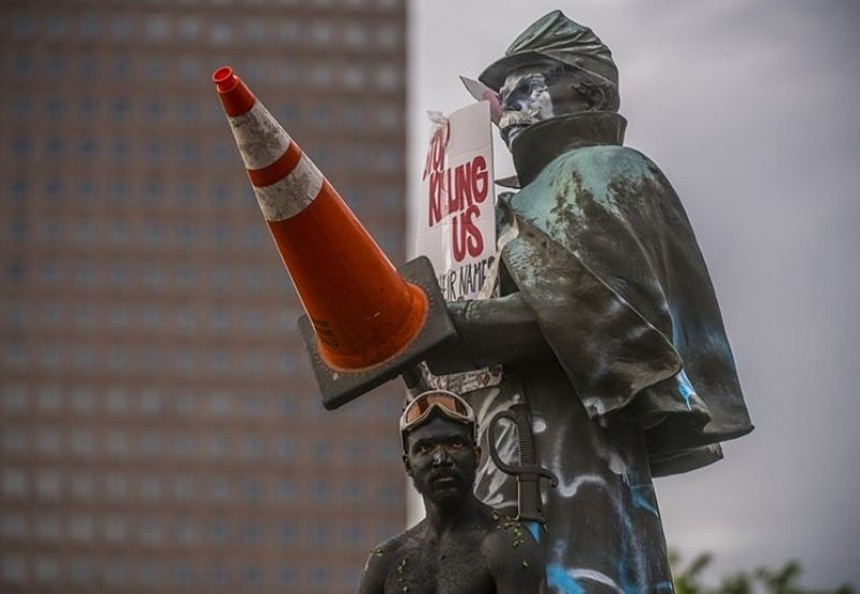 The figure on the Civil War Monument was vandalized, then toppled/
Evan Semon
But then in June 2020, at the height of the protests over the death of George Floyd, demonstrators toppled the figure of the Union soldier that had stood on the top of the Civil War Monument. And as legislators debated what to put where the soldier had once stood, they came up with an unexpected solution: Place the memorial to the Sand Creek Massacre there. “After the statue came down, we felt like it seemed kind of like a sign,” said Representative Susan Lontine, who chairs the committee, at the temporary installation of the soldier at the History Colorado Center last fall.

The statue has been there ever since, although at last week's committee meeting, it was proposed that the soldier be moved to the Colorado Department of Military and Veterans Affairs building in Centennial. That suggestion was postponed for more discussion.

The day before, the Colorado Geographic Naming Advisory Board had met to consider a backlog of name changes that had been suggested to the U.S. Board on Geographic Names, which considers all proposals for federal sites such as creeks, rivers and mountains. Federal staffers contact groups that might be affected by name changes — counties, tribes, other federal agencies — and also like to consult with the states. Colorado had lacked an official naming entity for a half-dozen years, but Governor Jared Polis made up for that with his new board, which includes fifteen members. They're now weighing dozens of suggestions, some involving what seems like housecleaning, but others dealing with down-and-dirty, "offensive" appellations. Five proposals alone are dedicated to changing the name of Mount Evans.

Jennifer Runyon, a geographer with U.S. Geological Services, has sat in on all of the group's virtual meetings. "They've made three decisions on almost thirty as they've gone through the backlog," she says. "Kudos to them; they're taking it seriously. Once you change a name, you don't want to go back and undo it."

Even if Polis might want to undo his comments before the October meeting of his naming advisory board, when he suggested that while he supported a name change, the proposed alternative to Squaw Mountain in Clear Creek County, Mestaa’ehehe Mountain, might be hard to pronounce (it's mess-ta-HAY) "White imperialist," responded one person in the meeting's chat. Married to William Bent, Owl Woman, as Mestaa’ehehe was also called, "helped negotiate trade between the many groups who traded at Bent's Fort, and helped maintain good relations between the white people and the Native people," according to the Northern Cheyenne tribal member who requested the name change. Owl Woman's son, George Bent, survived the Sand Creek Massacre; he'd been with Black Kettle.

Many of the matters before this board, too, have been postponed for further discussion, and Secretary of the Interior Deb Haaland's November 19 announcement that she will establish her own board to deal with federal places named "squaw" could push the timeline again. At the same board meeting where Polis spoke, one woman who'd suggested two years ago that the name of Redskin Mountain be changed to that of her non-Native grandmother complained that the process was taking too long.

Tell that to the descendants of the Sand Creek Massacre. 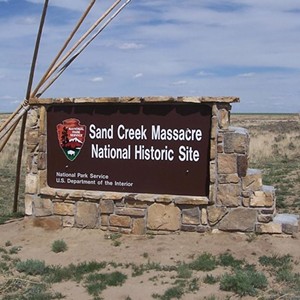 On November 29, they will again gather at the Sand Creek Massacre National Historic Site to remember their ancestors who died there 157 years ago. It wasn't until the late ’90s that the location of the massacre was identified; it wasn't until 2000 that Congress approved making the spot a National Historic Site, and the site wasn't dedicated by the National Park Service until 2007. Today, fifteen years later, a new Sand Creek Visitor, Research and Education Center is going up in Eads. Finally.

But the discussion continues over the future name of Mount Evans. The discussion continues over the appropriate location, and design, of a monument dedicated to the tribes that once called the Front Range of Colorado home. Meanwhile, the stand of the Civil War monument that was covered in plywood during the protests now bears a slightly more permanent shell, boasting "Colorado for all."

Nothing lives forever.
KEEP WESTWORD FREE... Since we started Westword, it has been defined as the free, independent voice of Denver, and we'd like to keep it that way. With local media under siege, it's more important than ever for us to rally support behind funding our local journalism. You can help by participating in our "I Support" program, allowing us to keep offering readers access to our incisive coverage of local news, food and culture with no paywalls.
Make a one-time donation today for as little as $1.