Skydiving Couple From Colorado Takes the Sport to New Heights

With their team SDC Core, Coloradans Jason Russell and Stephanie Strange represent the United States at worldwide skydiving events. Courtesy Dittoe Public Relations
Stephanie Strange started skydiving in high school. The teenager’s parents had a rule that she either had to play a sport or get a job, and when she decided she didn’t want to run track, she got a job at the Calhan-based skydiving club Front Range Skydivers instead. She wasn’t interested in the sport at all, though, and was happy just to sell tickets and snacks.

“I thought they were all nuts,” Strange says. “When I turned eighteen, all the staff decided I was going to do a jump. I didn't want to. I was terrified from getting geared up to getting in the plane and flying to altitude, but the second we were outside the door, I fell in love.” From there, Strange knew she needed to make skydiving her life.

Unlike Strange, Jason Russell started skydiving when he was thirty, which he says is a bit older than most.

Before he found skydiving, Russell rode motorcycles — but he didn’t know how to hold back, and was constantly injuring himself. After his fourth knee surgery, he realized he couldn’t continue down that road. Luckily, a friend, Graham Frank, asked him to do a tandem skydive.


Russell loved it, and the friends decided to take skydiving classes. When Russell realized that there was a competitive side to the sport, he decided to start building a life centered on skydiving. That was in 2002.

Living in Colorado made it more difficult to reach that goal.

Jason Russell and Stephanie Strange make their home in Conifer.
Courtesy Dittoe Public Relations
Part of what makes Colorado a difficult place to skydive is the altitude: A higher ground elevation requires that dives be shorter, because skydiving planes can only go up to about 13,000 feet without interfering with airspace reserved for commercial flights.

Colorado's thinner air also means there's less room for error. “I don't think it's more dangerous, but certainly your window for recovering from a mistake is smaller because of that lower density in the air,” Russell explains.

As a result of topography, Colorado’s drop zones aren’t part of the national competitive circuit. The big ones are located in Eloy, Arizona; Perris Valley, California; and Ottawa, Illinois. For years, Russell traveled to those places to compete; he didn't want to leave his home in Westminster or The Rack, the now-closed bar he owned in Boulder.

What got him to finally leave Colorado was an interesting job offer for Strange, whom he met when she got a job at a vertical wind tunnel in Denver in the late 2000s. A few years later, she was asked to become a skydiving instructor in Abu Dhabi.

“When the Abu Dhabi tunnel opened, they needed a female instructor because of the cultural beliefs regarding gender mixing,” Strange recalls. “At the time, I was the only female rated tunnel instructor in the world. A previous co-worker was hired out there and asked me to come work there.”

Although she and Russell were in a relationship, Strange went to Abu Dhabi by herself. They tried dating long-distance, but it was challenging. Then the Abu Dhabi tunnel offered Russell a job, too.

After working there together for a few months, the pair was invited to skydive at a private indoor facility in Dubai. They didn’t know it at the time, but the facility was owned by the Crown Prince of Dubai, Sheikh Hamdan Bin Mohammed Bin Rashid Al Maktoum, also known as “Fazza.” Fazza wanted to learn to skydive, and he asked Russell and Strange to teach him and a few friends.

They jumped at the chance. “For a few years, we just taught the crown prince how to skydive,” Russell says. “At the same time, we had a private facility that we were able to fly pretty much nonstop, and we did.”

That’s when they joined their first vertical championship team, Skydive Dubai Nexus, which was sponsored by the Dubai International Parachuting Championships. Unlike the traditional, belly-down skydiving that most people imagine when they think of jumping from a plane, in vertical skydiving participants aim their feet at the ground and synchronize their bodies to earn points during competition.

Eventually, the couple got tired of the big-city life in Dubai; both missed Colorado's access to nature.

“When I lived in the UAE, I realized how much I missed blue sky, seasons and nature," Strange recalls. "So while we lived there, we bought a house in Conifer so that when we came back to the United States, we would be able to enjoy all of that."

Back in the States, they formed another vertical formation team: SDC Core, sponsored by Skydive Chicago. To get ready for competitions, the team — which includes members from California and Utah — meets for ten-day training camps in Chicago, getting in as many jumps as they can, up to sixteen in a day.

Working in a team of five adults can be challenging, Russell says, because everyone wants to give input. For Russell and Strange, the added element of balancing their personal and competitive relationships was part of the learning curve. 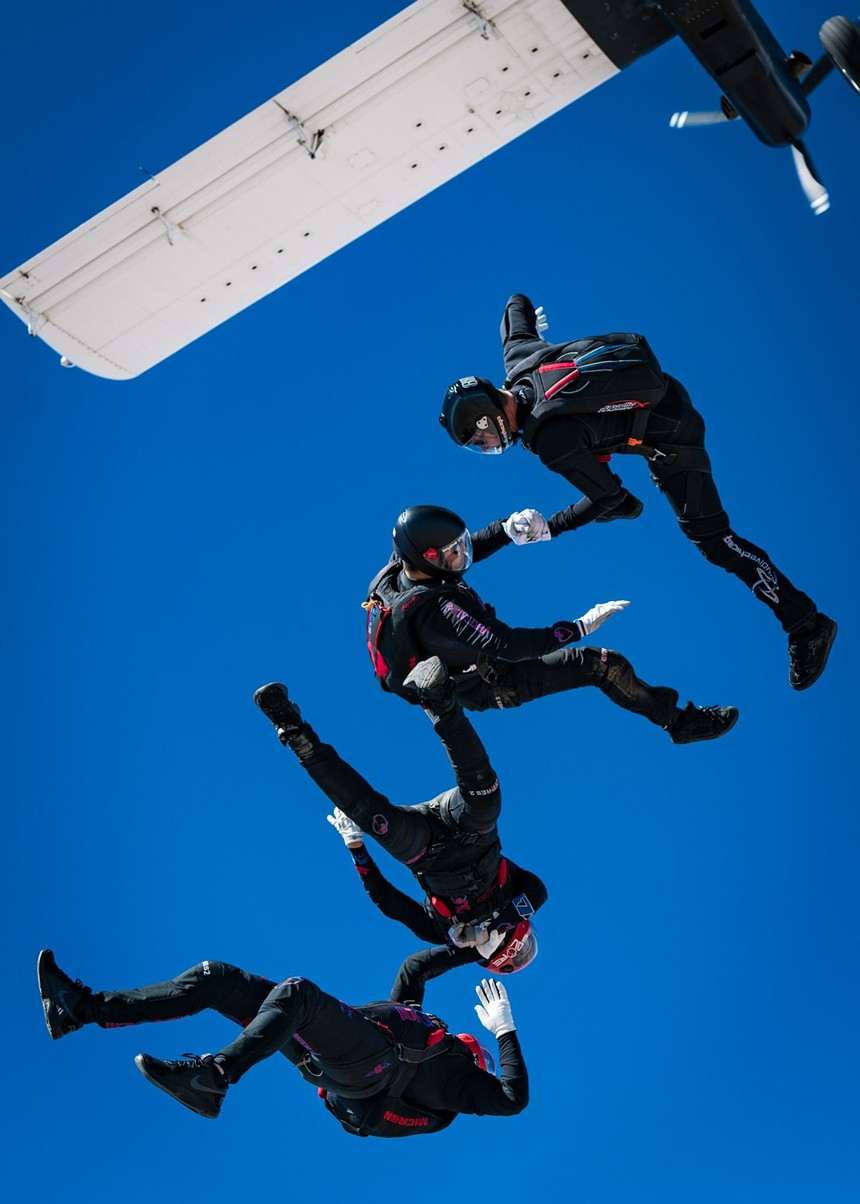 The team competes by forming pictures in midair for points.
Courtesy Dittoe Public Relations
Ultimately, though, the team figured out not only how to work together, but how to excel: In August it won the gold medal at the 2021 FAI World Parachuting Championships. The event, called a Mondial (for "world"), only happens every four years.

Though the skydiving scene is fairly small, more than thirty countries sent competitors to Russia for the World Championships this year. “If I had to describe it, it's like a comic con...except way smaller,” Russell says. “It's just this niche community of people who are interested in competing.” The United States Parachute Association returned with thirteen medals, including SDC Core’s gold.

Russell has been part of several skydiving world records, including a 138-person skydive he helped organize in 2012; every person had to be connected, head pointed at the ground, in order to achieve that win. He’s shooting for 200 people next year.

Russell says that he would rank among the top male skydivers in the world, but that Strange is clearly the best woman. Although the competitions have women’s categories, she competes in the open field with him.

“I’ve never been a person to let others label me and tell me what to do or how things have been done in the past,” Strange says. ”When I’m told it’s impossible, it just pushes me to work harder and prove them wrong.”

They both keep pushing to become better, and also to grow the small community of skydivers. Russell encourages everyone to try skydiving, noting that it offers something very rare: the opportunity to live in the moment.

“I have more than 20,000 skydives,” he says. “Every skydive, I'm in that moment, and I'm participating in what's happening right in front of me. The rest of the world sort of melts away."
KEEP WESTWORD FREE... Since we started Westword, it has been defined as the free, independent voice of Denver, and we'd like to keep it that way. With local media under siege, it's more important than ever for us to rally support behind funding our local journalism. You can help by participating in our "I Support" program, allowing us to keep offering readers access to our incisive coverage of local news, food and culture with no paywalls.
Make a one-time donation today for as little as $1.
Catie Cheshire is Westword's editorial fellow. After getting her undergraduate degree at Regis University, she went to Arizona State University for a master's degree. She missed everything about Denver -- from the less-intense sun to the food, the scenery and even the bus system. Now she's reunited with Denver and writing news for Westword.
Contact: Catie Cheshire