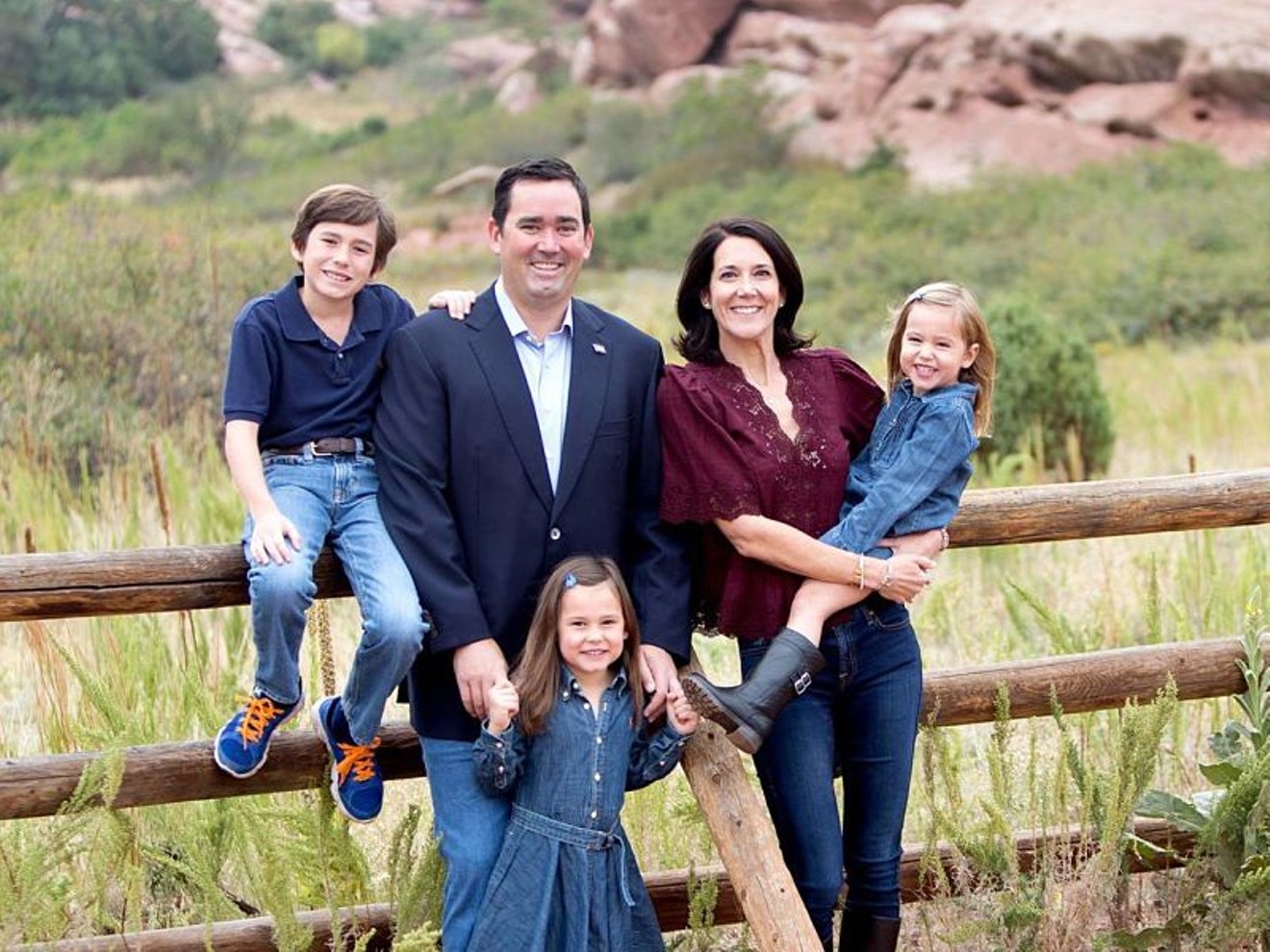 Jenna and Walker Stapleton with their children during 2018 gubernatorial campaign. Walker Stapleton campaign
The Stapleton neighborhood's current name will soon become a relic of the past because of Ben Stapleton's early embrace of the KKK, and Stapleton family members still living in Colorado support the change.

"That fact has stained his entire career," says Jenna Stapleton, wife of Walker Stapleton, whose great-grandfather, Ben Stapleton, was a member of the KKK during his first years as Denver mayor in the 1920s. "For someone who is coming from it as a person of color, that's what sticks out, obviously. So we have to not honor his legacy at all at this point. There can't be a nuanced or gray situation. That's been hard, because that's a hard thing to have to do when someone has done a lot of other good things."

In supporting the effort to change the name of the Stapleton neighborhood, Jenna and Walker Stapleton are joining with civil-rights advocates, elected officials and other Colorado residents who have pushed for decades to drop the name Stapleton from one of Denver's newest neighborhoods, built on the ground that was once home to Stapleton Airport, named after the mayor at the time it was founded: Ben Stapleton. During the recent protests, their cause has gained momentum...and new advocates.

But as Jenna points out, it can be difficult for a family to grapple with the legacy of an ancestor with a decades-long career in public service, as well as a huge asterisk on his résumé. That difficulty is illustrated by how her husband's statements on the topic of his great-grandfather have evolved over the past decade.

Ben Stapleton became mayor of Denver in 1923, when he was a member of the KKK.
Denver Public Library
In 2009, while running to become state treasurer of Colorado, Walker Stapleton released a campaign ad praising Ben Stapleton's record of political service:

"My great-grandfather served five terms as Denver's mayor in the 1920s, the 1930s and the 1940s. In fact, he's Denver's longest-serving mayor. His accomplishments include building the first civic center in Colorado, helping to reinvigorate the Denver parks system, including right here at Red Rocks, and building Colorado's first municipal airport, Stapleton airfield," he said in the ad.

But soon, Black Lives Matter 5280 started pointing out that Stapleton airport — and the neighborhood that replaced it — had been named after a then-member of the KKK. In 2015, members of the group began passing out informational fliers about Ben Stapleton's background around the neighborhood, and flew a banner that read "#ChangeTheNameStapleton" from the East 29th Avenue Town Center sign in Stapleton.

After Walker Stapleton secured the Republican nomination in the 2018 Colorado gubernatorial race against Democrat Jared Polis, the résumé of his great-grandfather switched from a point of pride to a subject that he tried to avoid. "I am focusing on the future," he told the New York Times when asked about his great-grandfather's ties to the KKK.

Walker Stapleton ran for governor in 2018.
RGA
He lost the election, but his defeat had more to do with math — the numbers just weren't there for Republicans — than history. Now, Walker and Jenna Stapleton are ready to switch to the winning side on the name game.

"Because it's specifically named after Mayor Stapleton, and knowing that that individual and seeing his name causes pain and anger for the community, for people of color in Colorado, I do not want it there," Jenna says.

Walker echoed those sentiments in a June 14 tweet, while also pointing out that a previous referendum of Stapleton property owners had resulted in a majority of the votes in favor of keeping the name:

"Disappointed only that dem process overlooked; votes cast multiple times by neighborhood residents. BUT.. IF..changing a name brings more equity, fairness and oppt’y for Denverites and specifically Coloradans of Color, I’m all IN," Walker wrote, adding a number of hashtags, including one pointing out that Ben Stapleton was a Democrat.

Walker and Jenna Stapleton with their children today.
Courtesy of Jenna Stapleton
Jenna was active on Twitter on June 14, too, writing that she was "surprised" that no one had reached out to her, her husband or other family members to hear their thoughts on the name change.

"People have told me to shut up, and no one cares, and I'm a Karen, and that's totally fine," says Jenna. "However, at the same time, people are saying, as white people, racism is our problem, too. I think we should be part of the solution and not part of the problem. Speaking out and saying we support the removal of the name might be helpful or maybe provide some healing, so that people know that while the great-grandfather was that way, the grandfather wasn't, the father wasn't, Walker isn't, and the kids aren't."

Jenna also wants the public to know that there are other places in Denver that bear the Stapleton name — but the Stapleton being honored is not Mayor Ben Stapleton.

In recent years, for example, the YMCA in downtown Denver, was named after Benjamin F. Stapleton Jr., the former mayor's son and Walker's grandfather.

"That's something that I will be very vocal about that should stand," Jenna says. "It's named after a completely different person."
KEEP WESTWORD FREE... Since we started Westword, it has been defined as the free, independent voice of Denver, and we'd like to keep it that way. With local media under siege, it's more important than ever for us to rally support behind funding our local journalism. You can help by participating in our "I Support" program, allowing us to keep offering readers access to our incisive coverage of local news, food and culture with no paywalls.
Make a one-time donation today for as little as $1.