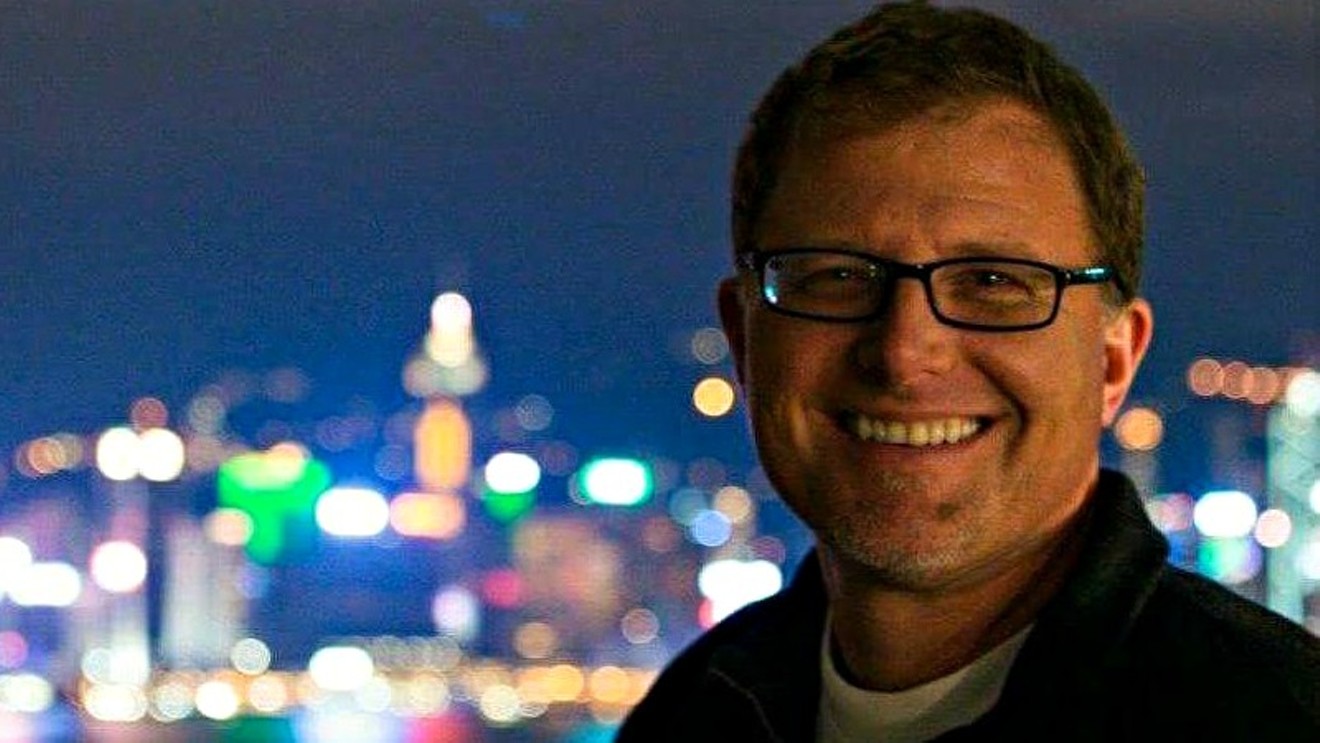 A photo of Steffan Tubbs shared on Facebook in May, shortly before the events described in this post. Facebook
Last week, as we've reported, a charge of domestic violence via telephone was dismissed against Steffan Tubbs, the longtime host of KOA's Colorado Morning News, who subsequently wrote on social media that he was "always innocent" and identified himself as a domestic-violence victim. Now, Tubbs's attorney and his accuser are speaking out and sharing startling and sometimes contradictory details about the incident and the relationship from which it sprang, even as the Denver City Attorney's Office confirms that the case is currently under appeal.

At approximately 9:50 a.m. on July 30, Tubbs was taken into custody at the 1650 Wewatta Street apartment complex of a woman with whom he'd been involved in a relationship for approximately two years. She goes by Jen; we've agreed not to publish her last name in this post, at her request.

Just over a week after news of Tubbs's arrest broke, Tim Hager, market manager for iHeartMedia's Denver stations, including KOA, issued a statement that reads in part: "Steffan Tubbs will no longer be part of Colorado Morning News on KOA. We appreciate all of his contributions during his time with us and wish him well."

In the days and weeks that followed, Tubbs alluded to his trouble with the law generically by way of Facebook requests that friends, family and supporters "send your positive prayer and energy to my children, who are collateral damage due to allegations against their dad." But on October 19, he revealed on Twitter that "prosecutors dismissed charges against me today." He added that he wore a purple tie to honor "all DV victims, including me." Following a broken-heart emoji, he added, "End it." 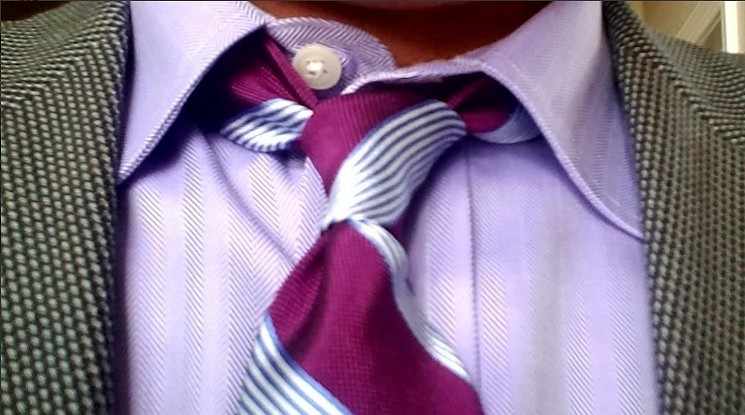 The photo tweeted by Steffan Tubbs while announcing that his case had been dismissed. Purple is the symbolic color of domestic-violence victims.
Twitter
Tubbs referred Westword's interview request to his attorney, Iris Eytan, who agreed to speak only about details that are part of the public record related to the aborted trial.

According to Eytan, Jen was arrested on suspicion of harassing Tubbs on June 30. "She slept overnight in jail, and then the judge issued a protection order and said, 'You cannot contact him. No matter what you do, you cannot contact him.' But she contacted him and violated the protection order and was charged with a misdemeanor violation of the protection order" on July 7. "So she had two cases pending against her. But then she got out on bond and asked the judge to go to Wyoming — to Cheyenne Frontier Days, where she knew Mr. Tubbs would be, because he was announcing as part of his job. She didn't tell the judge that he would be there; she just said she'd be going with friends and family. She showed up in Wyoming, where Mr. Tubbs was, and was posting about her presence there — and the allegation is that Mr. Tubbs was responding to the fact that she was incessantly stalking and harassing him."

The disturbance-by-phone allegation, which Eytan depicts as "a very low level municipal defense," was scheduled for trial on October 18, "but the prosecutor could not call the complainant and the only witness in the case because she confessed to committing burglary when she had an interview with the prosecutor two days before.... She broke into his house, then she broke into his car, and then she got his concealed-carry weapon out of his car and brought it into the house and threatened to kill herself with the gun. She made this very scary confession, which she'd been denying for months, to a prosecutor who was sitting in the courtroom when the case was dismissed."

The reason for the ruling, Eytan goes on, was that the conversation between Jen and the prosecutor "was not disclosed to the defense. That's called a discovery violation — when you meet with a complainant or a witness and don't turn over a statement. The judge said to her, 'Well, if you take the stand, you're going to get cross-examined on the issue regarding the burglary, because I've allowed in evidence about the surrounding circumstances as to why Mr. Tubbs allegedly sent you messages that were disturbing. I'm allowing that to happen.' So she consulted with two lawyers, and her lawyers advised her that if she testified, she could possibly face a Class 3 felony burglary charge." 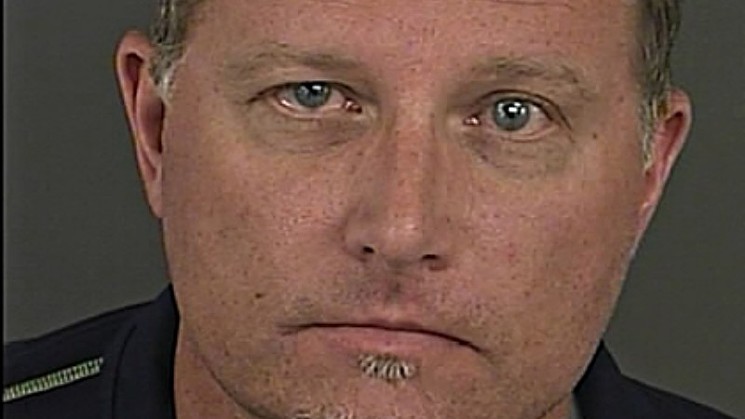 Steffan Tubbs's booking photo.
Denver Police Department
Eytan stresses that "the case was dismissed, rightfully, by the prosecution. This wasn't some high-powered lawyer-game trick. I didn't do anything. This was a dismissal by a prosecutor in the City and County of Denver." She maintains that "Mr. Tubbs is a victim of domestic violence, he is a victim of a burglary that [Jen] has not been charged with but she confessed to, and he is innocent, because that's what happens when you get charged with a case and it gets dropped, or if you don't get charged at all. You're presumed innocent from day one."

She describes herself as having "medically retired from the Air Force in September 2014 after serving 6.5 years active duty. I'm currently a full time student in Denver and will graduate next year. I'm also a veteran's advocate — advocating around the country."

In March 2015, Jen notes that Tubbs "approached me and asked me to share my story of my battle with PTSD for his documentary Acronym.... The relationship started off as just being friends. Then we took our first trip together in December 2015-January 2016 to London for [New Year's Eve]. That's when things started to change and you can say we were dating. We traveled the world together, going to as many as four countries and a total of eleven trips starting from 2015/2016. I mostly stayed with him at his house, establishing a home of record with Steffan. I was a big part of his family and had a very close bond with his two sons. It lasted till the end of June 2017."

She offers a "no comment" to questions about when the relationship became troubled and how difficulties between the pair manifested themselves, but confirms that "there was a mandatory protection order that was placed on July 1st and reissued on July 14." Nonetheless, "I never violated the orders going to Wyoming. I had permission from a Douglas County judge to travel to Wyoming and was not in Wyoming the same time Steffan was there."

While Jen confirms that "I did admit to violating the protection order as a deferred judgment," she claims that she did so because "Steffan repeatedly called me and left voicemails of him crying and begging to get in touch with him, pleading to me that he wouldn't tell anyone."

On July 7, she goes on, "after suffering for over a month of suicide ideation thanks to PTSD and the toxic situation I was in with Steffan, I tried to take my life. Thanks to my mother, who called for a welfare check, police found me unconscious but still alive. They got me in time and took me to the hospital and then...[I] was admitted to a mental health hospital and was discharged on Wednesday the 12th."

Two days later, Jen continues, a new round of problems started: "Steffan harassed me via phone almost every day after July 14th until he was arrested and a mandatory protection order was placed." 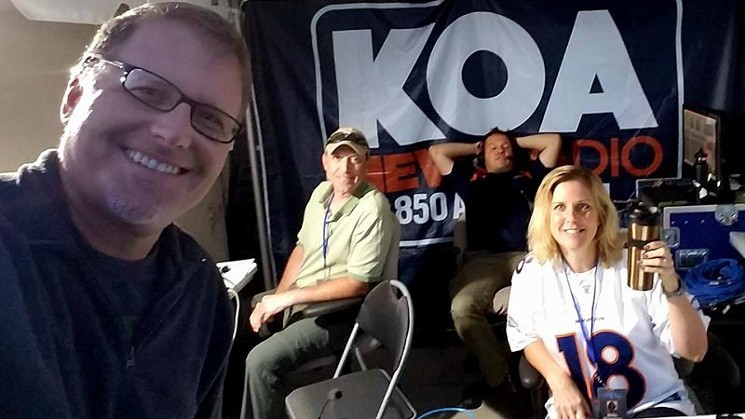 Steffan Tubbs, April Zesbaugh and the KOA morning crew at Broncos training camp in July.
Facebook
As for the specifics of that harassment, Westword obtained a number of screen captures and files that appear to have been sent from Tubbs's cell phone. But Eytan doesn't confirm their authenticity, saying that because none of the items were presented in court, they remain mere allegations.

On the subject of the burglary assertion, Jen emphasizes that "Steffan's house was also my home at the time we were dating. I had established a legal home of record there. I had keys, a garage code and could come and go." She credits "a technicality" for spurring the choice not to testify.

Whether Jen gets a chance to speak under oath in the future will turn on the success of the aforementioned appeal. A source at the Denver City Attorney's Office says prosecutors' request for a stay of the trial was denied on October 19. At that point, the case was dismissed without prejudice, meaning that if the city wins its current appeal, the case can be refiled.

The process won't be speedy: There are a series of deadlines for submitting briefs and replies, and once the final package lands in district court, the assigned judge will have no time limit on deciding whether the controversy will be resurrected. But prosecutors are pushing forward under the belief that some evidentiary rulings made by the original judge were improper.

Even as Jen hopes the appeal is successful, Eytan says Tubbs wants to put recent developments behind him, even if it means accepting his firing by KOA: "Mr. Tubbs has made no statement that he's going to litigate against iHeartMedia. The bottom line is, he doesn't want to spend his life in a courtroom. He has a life to live, and he wants to move forward."

Not that Eytan is fearful of airing the dispute judicially. "I actually objected to the dismissal," she says, "because I wanted this case to go to trial" as a way of clearing Tubbs's reputation. "I was in court saying, 'Judge, I object to this dismissal. I want to go to trial.'"

She may get her wish.