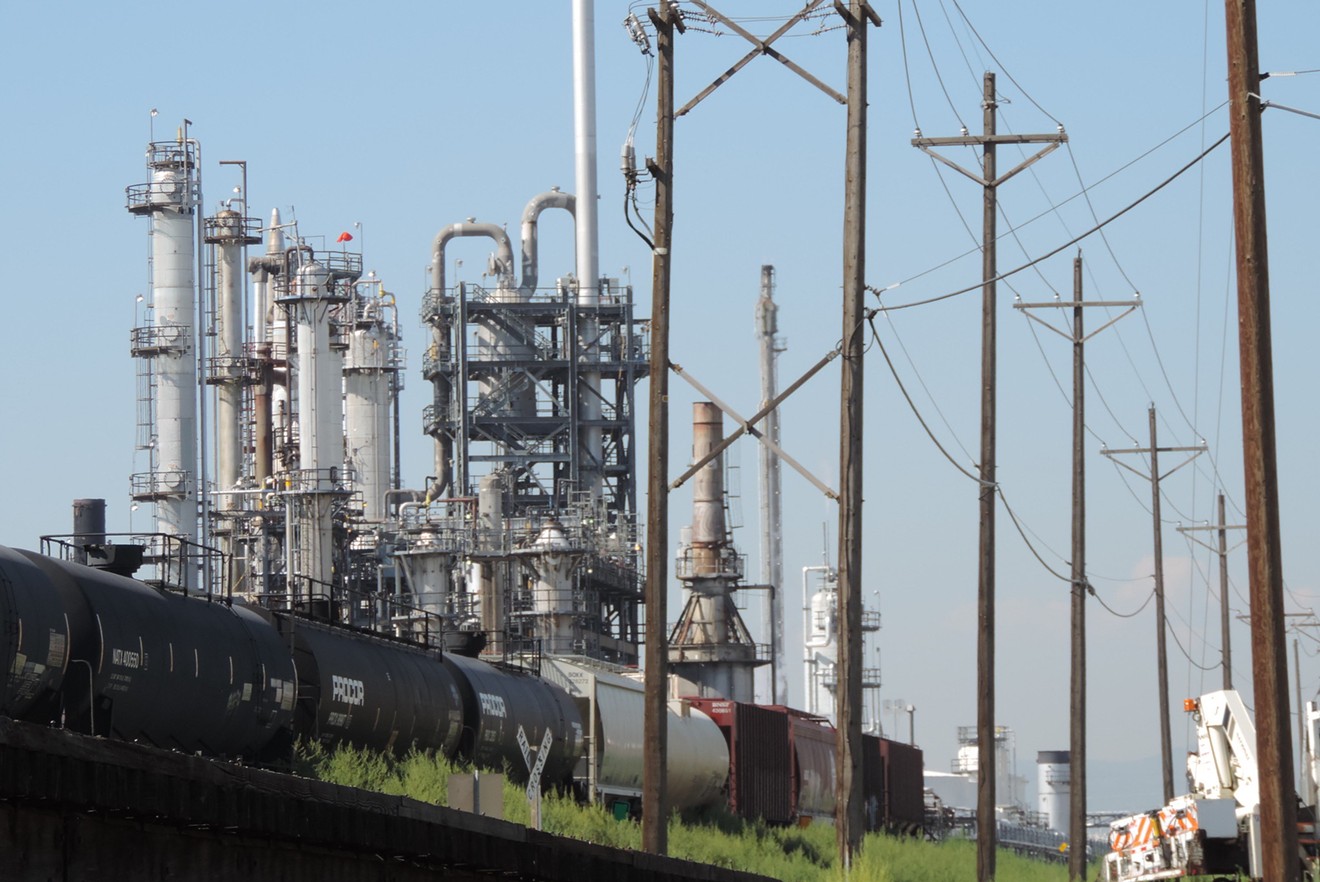 The Suncor oil refinery in Commerce City is one of the largest stationary sources of air pollution in Colorado. WildEarth Guardians / Flickr
The operator of a Commerce City oil refinery says it has shut down the facility after a malfunction that spewed a chemical byproduct into the surrounding community — the second such incident in recent months.

In a statement posted to social media, Suncor Energy said that the refinery, located just north of Denver city limits near the intersection of Brighton Boulevard and Interstate 270, experienced an "equipment malfunction" at around 5:40 p.m. today, March 17. The incident caused the release of catalyst, a clay-like substance used in the refining process.

"As a precautionary measure, we sounded a vapor release alarm and immediately initiated our response plan," the company's statement says. "The unit has been put in safe mode."

Brighton Boulevard was temporarily closed due to the malfunction, but has since reopened. Suncor notified residents on March 9 that it planned to conduct maintenance on the refinery that would last "approximately two weeks" and involve "periods of increased flaring." Visible plumes of yellowish smoke were being emitted from the facility's smokestacks today, according to social media posts from residents.

Suncor's description of today's incident is nearly identical to that of a December 11 "operational upset" that caused a yellowish plume of ash-like material to drift into Commerce City and fall on cars and other outdoor surfaces, leading two nearby schools to be placed on lockdown. The incident caused the refinery to be shut down for nearly a month.

Safety documents released by Suncor in the aftermath of the December 11 incident indicated that its catalyst materials are rated as slight health hazards, according to the National Fire Protection Association’s hazard identification scale. The company advised residents at the time to "take standard hygiene practices such as washing hands and/or any affected clothing."

Suncor says that it is "concerned" about today's incident and is monitoring the situation. "All employees are accounted for and community air monitoring is in place," the company's statement reads. "We’ll provide more information as it becomes available and as response activities allow."

In a statement, the Colorado Department of Public Health and Environment confirmed that Suncor had notified regulators of an equipment failure that resulted in "highly visible opacity emissions" and that the company had been in contact with local emergency services and health officials. The department does not believe there is ongoing risk to the community, according to the statement.

"Suncor security personnel conducted monitoring with handheld devices for a range of materials, including hydrogen sulfide and sulfur dioxide, and observed no elevated levels," CDPHE's statement says. "We will monitor the situation and review data from the air monitors we have placed around the Suncor refinery."

Earlier this month, CDPHE officials announced a record $9 million agreement with Suncor to settle a wide variety of violations identified in recent state inspections of the facility. The Suncor plant would also be subject to the new air-monitoring and reporting regulations outlined in legislation backed by Democratic lawmakers at the State Capitol.

In its apology for the December 11 incident, Suncor assured community members that the company had "already taken a number of steps to help prevent such an incident from happening again."
KEEP WESTWORD FREE... Since we started Westword, it has been defined as the free, independent voice of Denver, and we'd like to keep it that way. With local media under siege, it's more important than ever for us to rally support behind funding our local journalism. You can help by participating in our "I Support" program, allowing us to keep offering readers access to our incisive coverage of local news, food and culture with no paywalls.
Make a one-time donation today for as little as $1.