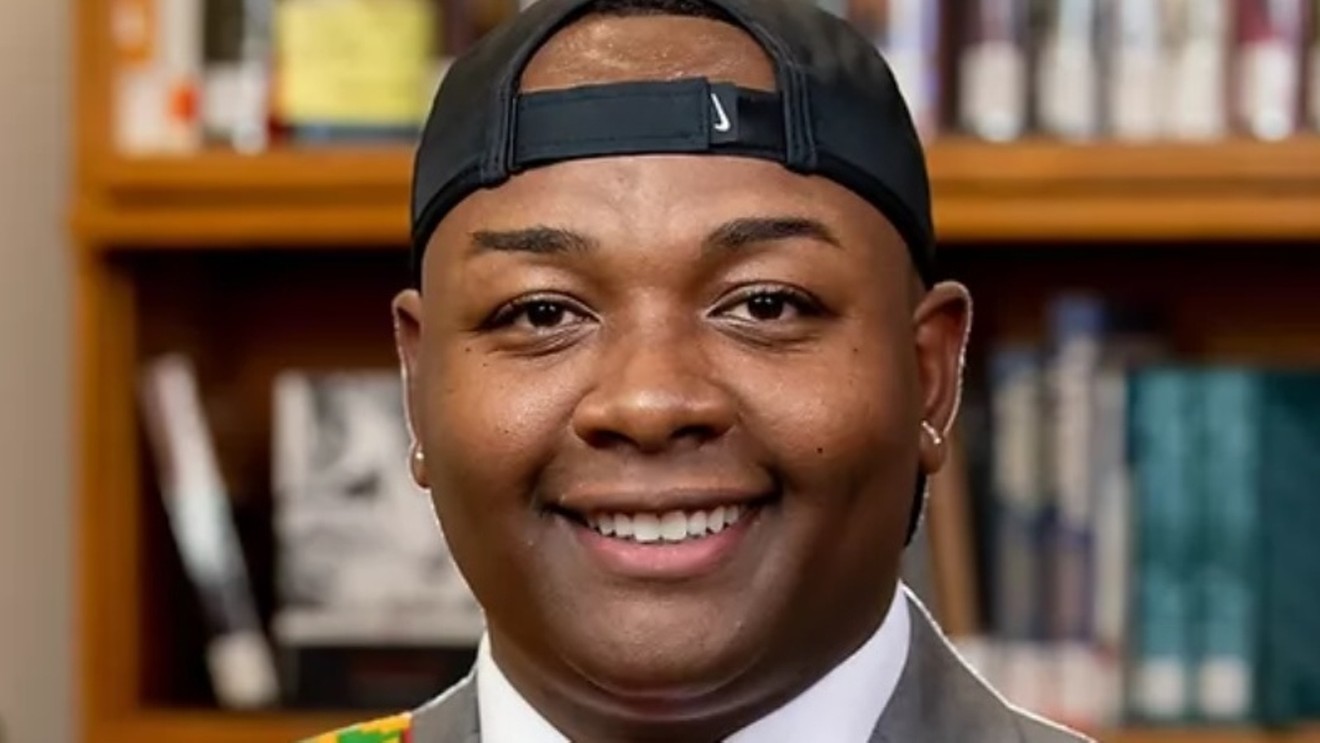 A portrait of Tay Anderson from his website. tayanderson.org
Tay Anderson, vice president of the Denver Public Schools Board of Education, filed a lawsuit last November asserting that he'd been defamed by several individuals and entities that had accused him of sexual misconduct: the advocacy organization BLM 5280, which first broached the subject on behalf of an unnamed woman in March 2021; volunteer boardmember Amy Brown; parent Mary Katherine Brooks-Fleming, who'd told a Colorado Legislature committee that an official later identified as Anderson had allegedly assaulted more than sixty students; and Jeeva Senthilnathan, an activist based in Parker.

In September, an independent report said it could not substantiate these claims, which Anderson had consistently denied, but chastised him for some of his behavior on social media. And last week, Denver District Court Judge David Goldberg dismissed Anderson's claims against BLM 5280, Brown and Brooks-Fleming, leaving only those targeting Senthilnathan intact.

Anderson and his attorney, Issa Israel, tell Westword that they plan to appeal Goldberg's ruling. But Igor Raykin of the law firm Kishinevsky & Raykin, who represents Brooks-Fleming, suggests that an appeal would be pricey and probably futile, and argues that Anderson's contention that he was exonerated by the report is overstated.


While I disagree that any of the parties should be dismissed as defendants. I’ve instructed my legal counsel to pursue all options that are available to us, including potentially appealing the ruling from the Judge.

My focus is on our students in Denver Public Schools. There are a series of important issues before the Board of Education like a minimum wage increase to $20 an hour, the ongoing conversations around potential school closures/consolidations, filling a vacancy on the Board for the first time since 2015, and addressing the literacy and math crisis our students are facing as they come out of the pandemic.

I won’t allow them to distract us any further, I earned the support of over 67,000 Denverites in 2019 and plan to do so again in 2023. Even after this failed attack on my character the voters of Denver saw through their lies and elected a progressive Board of Education for the first time in recent history. I was both humbled and honored to be elected Vice President of the Denver School Board to lead on this important work mentioned above until the end of my first term in office.

It’s time to move forward and focus on our children, not politics.

Israel notes that "after carefully considering our respective positions over the course of a month, the court granted two of the three special motions to dismiss — which, if it stands, would allow BLM 5280 and Mary Katherine Brooks-Fleming off the proverbial hook. We believe the law is clear, however, that defendants in defamation actions cannot escape accountability for leveling baseless, malicious and, let’s not forget, 'anonymous' allegations of serial sexual assault without so much as a single alleged victim coming forward or an indictment following a fair investigation."

Israel adds: "It’s important to remember that these allegations were thoroughly debunked following separate investigations carried out by both Investigations Law Group," which produced the report after being contracted by DPS, "and the Denver Police. While we appreciate the court’s effort to rule fairly and appropriately on this complex matter, and notwithstanding my deep respect and personal admiration for Judge Goldberg, we will be appealing the decision forthwith and, frankly, I like our chances."

Raykin, speaking for Brooks-Fleming, has a very different take. "We informed Tay's lawyer right off the bat that this was a frivolous lawsuit, and that the legal standard here is very high," he says. "There's no question that Tay is a public figure. If Tay was a private individual, he would just have to prove negligence, which is a much lower standard. But because he's a public figure, the legal standard is elevated. He would have had to prove that my client acted with actual malice and reckless disregard to the truth, and looking at the allegations and the totality of circumstances of the events here, I knew they would not be able to meet that legal standard."

To fight the accusations against Brooks-Fleming, Raykin filed two motions to dismiss. The first one "raised the issue of legislative immunity, saying that regardless of what was said before the legislature, there's an immunity to protect it — and we were the only defendants that had this claim, because she was the only one who testified before the legislature," he says, adding that the second "was an anti-SLAPP [Strategic Lawsuit Against Public Participation] motion, which has a different legal standard that didn't include any kind of immunities."

Judge Goldberg eventually "ruled on the second motion to dismiss and tossed the case against our client, BLM 5280 and Amy Brown — and that made the first motion to dismiss moot, because there was no reason to rule on it if the case had already been dismissed," Raykin says. "But Tay's lawyer has talked about an appeal, and motion one could be resurrected if Tay appeals and the case is reinstated, which is a special feature of anti-SLAPP."

It's not the only one, he notes: "Whenever you lose on an anti-SLAPP motion to dismiss, you're on the hook for attorney fees, and there are a hell of a lot of them. BLM 5280 hired a high-powered firm" — Lewis, Roca, Rothgerber, Christie LLP — "and I'm sure they plan on collecting their fees from him and his lawyer. We plan on collecting our fees, too. If they win the appeal, they no longer have to pay attorney fees. But if they lose, it could be very expensive, especially since his lawyer was instructed that this was a frivolous lawsuit and he filed anyhow."

Adds Raykin: "Tay Anderson has been running around claiming that the report DPS commissioned by the Investigations Law Group vindicated him, and that is absolute nonsense. The report said that the most serious charges were unsubstantiated, but it also found some troubling interactions that he actually admitted to. In bringing these lawsuits, I think Tay has been trying to make a point about his own vindication, whereas I think people need to take a closer look at some of the disturbing aspects of the report."

On April 20, representatives for BLM 5280 sent Westword the following statement about the ruling: "We recognize that this ruling closes a painful chapter for our community and for survivors of assault. With the
dismissal of this case, we look forward to continuing the important work that we never stopped. In spite of
these pitfalls and hard lessons, we remain clear and steadfast: BLM 5280 will continue to wage a struggle
against the harmful impacts of capitalism, white supremacy, and patriarchy. We will continue our efforts toward building a world where survivors are not silenced and the community is not splintered by oppressive forces. We move towards that world and encourage the community to do the same."

This post has been updated to include a statement from BLM 5280.
KEEP WESTWORD FREE... Since we started Westword, it has been defined as the free, independent voice of Denver, and we'd like to keep it that way. With local media under siege, it's more important than ever for us to rally support behind funding our local journalism. You can help by participating in our "I Support" program, allowing us to keep offering readers access to our incisive coverage of local news, food and culture with no paywalls.
Make a one-time donation today for as little as $1.