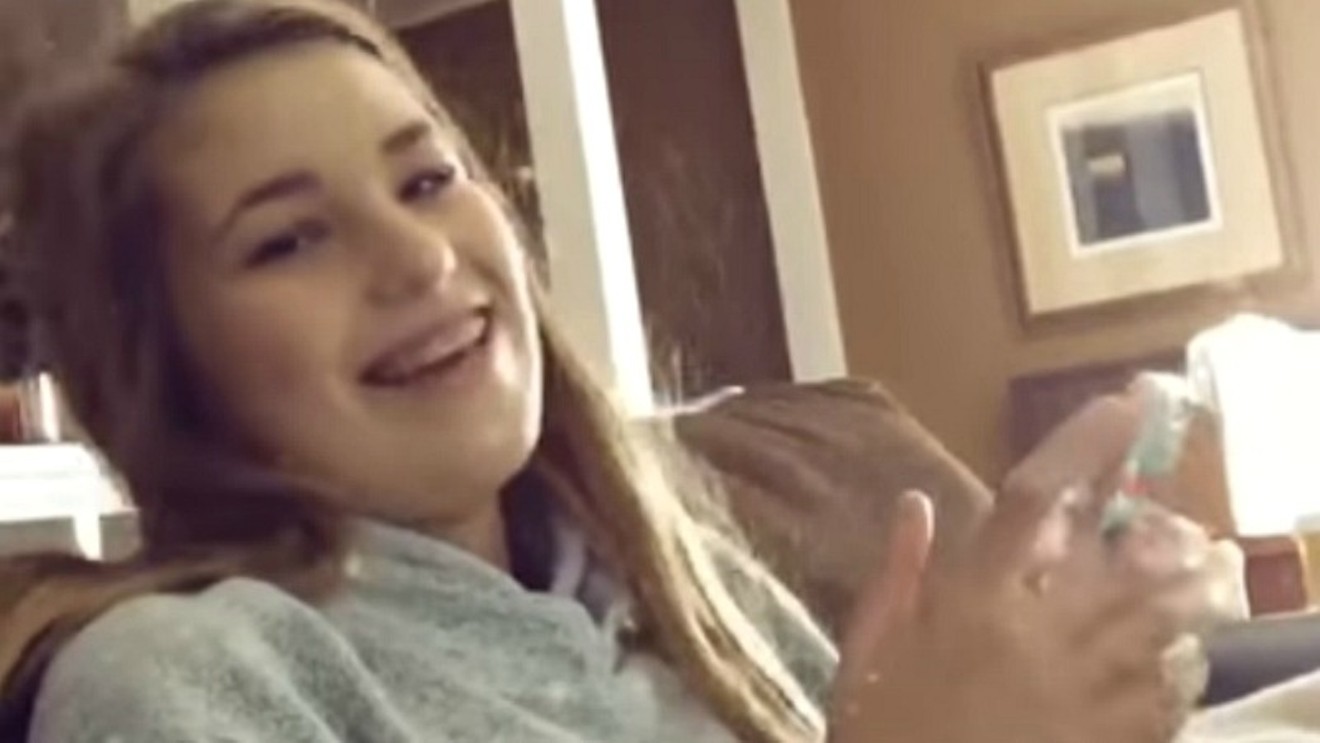 Tess Smith as seen in a tribute video on view below. YouTube
Update: Tess Smith, a fifteen-year-old from Wichita, Kansas, broke her leg while skiing at Breckenridge on March 3. Afterward, she became unresponsive, and she died on March 6; see our previous coverage below. An autopsy performed yesterday was intended to explain her inexplicable decline, but Lawrence Smith, Tess's father, corresponding via e-mail, notes that the mystery has not yet been solved.

"The autopsy has been completed and my daughter is as unique in death as she was in life," Lawrence writes. "The coroner could not find an obvious reason for her sudden brain-swelling. They have further tests to perform and can hopefully shed some light in the coming weeks."

Tess was reportedly skiing for the first time when the accident took place. She was not wearing a helmet.

"Right now," Lawrence continues, "my daughter is to arrive home Friday and we shall have her funeral on Saturday. Her final resting place will be at Resurrection Cemetery in Wichita."

Lawrence appreciates the messages of condolence he's received from Colorado and asks that we inform "all the caring people that Tess will soon be safe at home."

Update 2: The obituary for Tess Smith has now been published, and it provides much more information about her. It reads:


Tess was granted her angel wings on March 5, 2017. Her final days were spent surrounded by family and friends that Tess had touched in major ways throughout her short, yet very memorable life. She was born on June 27, 2001 in Wichita, Kansas. Tess's life would seem too short to many, but those who were touched by her understood that the quality of existence far exceeds the quantity of time in which one lives. She led a life as beautiful and blessed as she was. She preferred to spend her time with friends and family, dancing, traveling, listening to music, and taking selfies. She loved to explore and see new parts of the world, although some of her favorite places to visit were Starbucks and Victoria's Secret. She was truly a walking testament of someone who valued others before herself, as she loved to make new friends and cherished relationships with many. Tess leaves behind her loving parents, Holly and Lawrence; her protective older brother, Evan Smith (fianc‚e, Katelynn Smith), all of Wichita; grandparents, Shirley Henning of Wichita, Dean Smith of Great Bend, and Beth Whitehead of Wichita; aunt and uncles, Greg and Janne Rowe and David L. Smith; cousins, Heather and Evan Feist, Shannon Rowe, Brennan and Tanner Smith; second-cousins, Brooklyn and Cameron Feist, all of Wichita. Her grandfather, Bill Henning, met Tess in Heaven where they are enjoying their time together while watching over us. Funeral service, 11 a.m. Saturday, March 11, at First United Methodist Church. Instead of flowers or food, Tess would hope that you would do an unexpected and unsolicited act of kindness for someone in her name. Downing & Lahey Mortuary West. Share online tributes with the family via www.dlwichita.com.

Continue for our earlier report.

Original post, 5:39 a.m. March 7: Tess Smith, a fifteen-year-old from Wichita, Kansas, lost her life following a March 3 skiing accident at Breckenridge, a resort that has already been the location of three fatalities this season. But because Smith died days after the incident from complications related to a broken leg, it's unclear if her passing will count toward the official death total at Colorado ski resorts, which reached six after Kressyda Ming died at Purgatory late last month, because of the unusual method used by ski areas to calculate this information.

The late Tess Smith
Facebook
As we've reported, an industry group, Colorado Ski Country USA, keeps tabs on skiing-related deaths at resorts in the state, and it applies its own standards to come up with seasonal totals. In 2013, for example, Patsy Hileman, a 26-year veteran of the Aspen Ski Patrol, was killed in a small avalanche near the Snowmass ski area. But because she was not technically on ski-area grounds at the time of the slide, her death wasn't added to that year's casualty figures.

Since a broken leg isn't commonly considered to be a fatal injury, it's unlikely Colorado Ski Country USA will consider Smith's death in the season's final tally. And thus far, no statement from Breckenridge has been released, as was the case for the previous three deaths this season.

The first skier death of this season took place at Breckenridge on December 19, 2016. The victim was Kevin Pitts, a 48-year-old Longmont resident who worked in marketing for Oracle.

Pitts hit a tree on Breckenridge's Alpine Alley run, not far from Peak 8's Imperial Express SuperChair, shortly after 1 p.m. on the 19th.

Although he was wearing a helmet, Pitts sustained a fatal blunt-force-trauma injury. He was pronounced dead at 1:42 p.m. at the Breckenridge Medical Center. 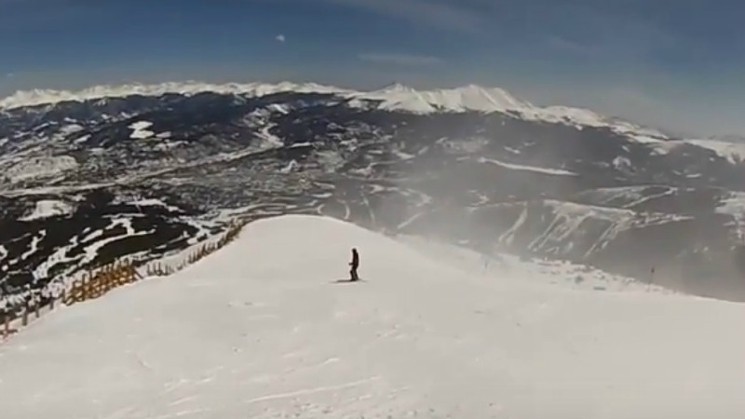 The Alpine Alley run at Breckenridge, where Kevin Pitts suffered his fatal accident late last year.
YouTube file photo
The next tragedy at Breckenridge began unfolding on Thursday, January 12, when Sean Haberthier, a 47-year-old from Denver, was reported missing. The following day, he was found on Lower Boneyard, an expert run at Breck not far from the Peak 8 lift.

Haberthier was alive when he was located, but he didn't respond to medical treatment and was pronounced dead later on the morning of January 13. He's said to have suffered a severe skull fracture after crashing into trees. He wasn't wearing a helmet.

Ricardo Cohen died on Friday, February 10, also at Breckenridge, on Volunteer, an expert run off the resort's renowned Peak 9. Cohen was wearing a helmet, but he didn't crash into trees, as is all too common in such fatalities. Instead, the Summit County coroner's office has determined that he simply slammed his head too hard into the snow.

Other skiing deaths this season include San Antonio mom Kelly Huber, age forty, who fell to her death from Granby Ranch's Quick Draw Express ski lift on December 29, 2016; Alicyn Mitcham, a seventeen-year-old from Colmesneil, Texas, who died after crashing into a tree while skiing at Winter Park Resort on February 15; and Ming, a mother of five, whose death at Purgatory, in southwestern Colorado not far from Durango, took place on February 25.

The main information released thus far about the circumstances of Smith's accident come from a GoFundMe page set up prior to her death. The initial post reads:


We are with the Smith family and were given permission to do this.... Tess is a beautiful girl with the most contagious smile. She is loved by so many family and friends and is being wrapped in prayer here in Colorado. Tess was involved in a skiing accident and is unresponsive. Medically, there is nothing more they can do. We are relying on God and prayers as she prepares to fight this battle on her own without the aid of life support. We would like to help the family with the medical and travel expenses they have and will incur. Tess is currently being treated at the Children's Hospital in Aurora, CO. If the God chooses to take Tess as his angel in the coming hours, Tess will need to come home to Wichita. If we receive the miracle we have been praying for, she will have additional medical expenses to make her healthy again. Please, if you are able to help with these expenses, the family would sincerely appreciate it. There is no one like Tess. She is so genuine, sweet, beautiful, and the worlds best friend. We continue to pray for her miracle and know she is God's child and He will answer our prayers in His way. Thank you so much.

Smith, who was reportedly unresponsive after the accident and didn't improve following treatment, died on Monday, March 6, after her organs were donated. The GoFundMe page update that followed reads:


No words can express how appreciated your generous donations and prayers for this sweet, sweet family are. At this time, the financial burden this family will be under is unknown. We know it will surpass the $12,000 goal we have set and reached. We absolutely do not want them to have to carry this burden on top of losing their precious daughter. Please continue to share and donate as the amount that will be needed will continue to rise for medical costs, transportation for Tess and the beautiful services they will be having for her in the coming days. The Smith family sincerely thanks each and every one of you.

At this writing, more than $17,000 has been pledged. Click for more information.

In the meantime, the most recent item shared on the GoFundMe page is a video tribute to Smith. See it below.