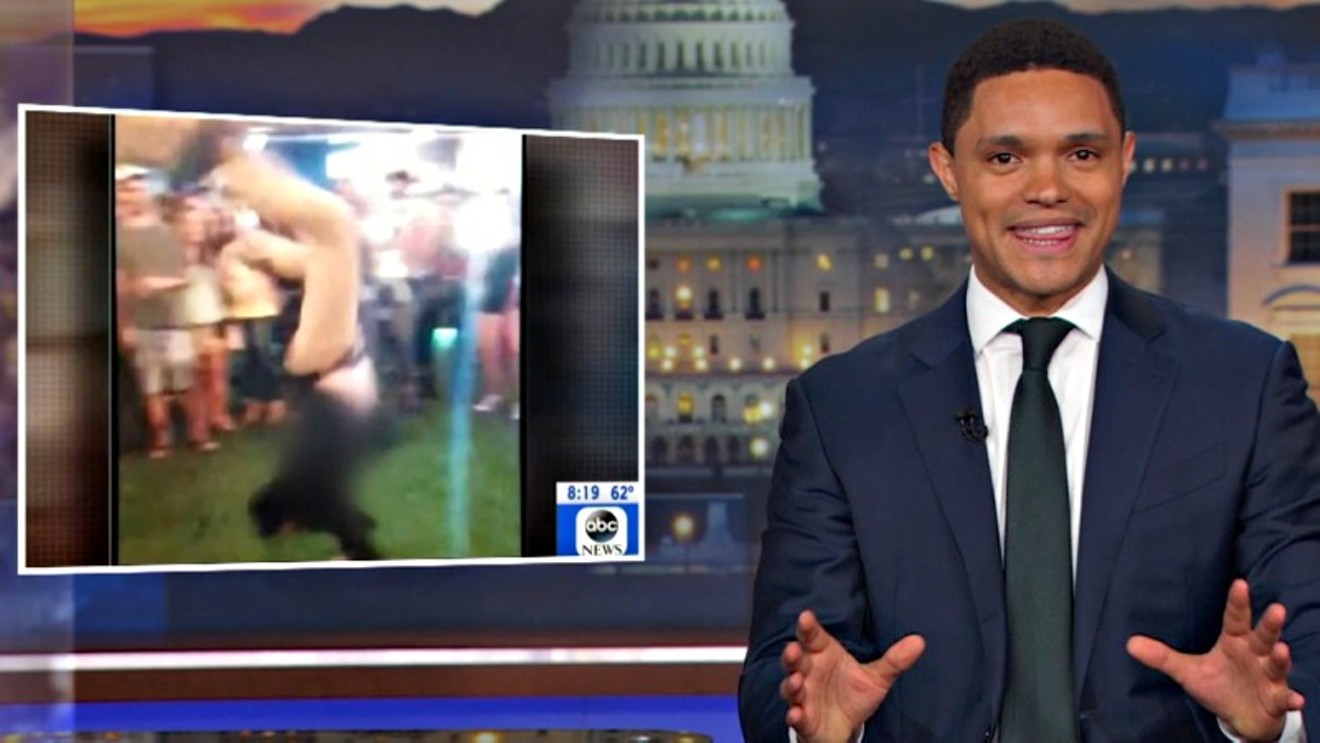 The Daily Show's Trevor Noah takes on the backflipping FBI accidental shooter at Mile High Spirits. Comedy Central via Facebook
The story of the FBI agent who accidentally shot someone while executing a backflip at Mile High Spirits Distillery over the weekend went national with the speed of social media, and plenty of folks on Twitter quickly made sport of the bizarre situation. But now, as witnessed by a hilarious segment on the June 4 edition of The Daily Show With Trevor Noah, the professionals are getting involved.

"Damn," Noah says near the start of the bit, on view below. "I always thought that white people were bad at dancing, but I didn’t know they were actually dangerous."

Since the shooting, the tale has moved forward on a criminal-justice track, with the Denver Police Department confirming that the homicide unit is investigating (even though the victim in the case was only wounded and is expected to fully recover) with an eye toward referring its findings to the Denver District Attorney's Office for possible charges.

In the meantime, 9News has identified the agent, who was released to an FBI supervisor after being taken to Denver Police headquarters, as Chase Bishop — and Mile High Spirits has publicly announced that the still-unidentified man winged in the episode is "welcome...to enjoy complimentary drinks forever."

We're hoping the Mile High Spirits crew will display a similar sense of humor about Noah's riffs on the venue, as seen in the following video:


"What is this nightclub?" he asks. "First of all, it's lit up like a grocery store. There's a guy in shorts and flip-flops, right? The floor is AstroTurf. Where is this? Is there a cover charge, or do you just flash your Looney Tunes tattoo to get in?"

At that point, Noah aims his wit at the boogieing gunman.

"How's the FBI agent going to shoot someone and then walk away like all he did was spill someone's Bud Light?" he wonders as the after-the-bullet portion of the clip plays. "Look at him: He's like, 'My bad, my bad. Party foul. Let's keep moving.'"

Noah also remarks about the flip-flop wearer, "who disappears as the gun goes off. It's like, 'Bang, I'm out!'" In his view, "That was the most black response you could ever get. Everybody else was like ,'Oh, my God! A gun went off!' That guy was like, 'Oh, shit! I'm out!'"

On the bright side, the victim has what Noah considers to be a "pretty dope story, as long as he keeps it short. Like, 'Yeah, that scar over there — that's where an FBI agent shot me."

Then he adds the details the man might be better off omitting: "Accidentally. While dancing."
KEEP WESTWORD FREE... Since we started Westword, it has been defined as the free, independent voice of Denver, and we'd like to keep it that way. With local media under siege, it's more important than ever for us to rally support behind funding our local journalism. You can help by participating in our "I Support" program, allowing us to keep offering readers access to our incisive coverage of local news, food and culture with no paywalls.
Make a one-time donation today for as little as $1.