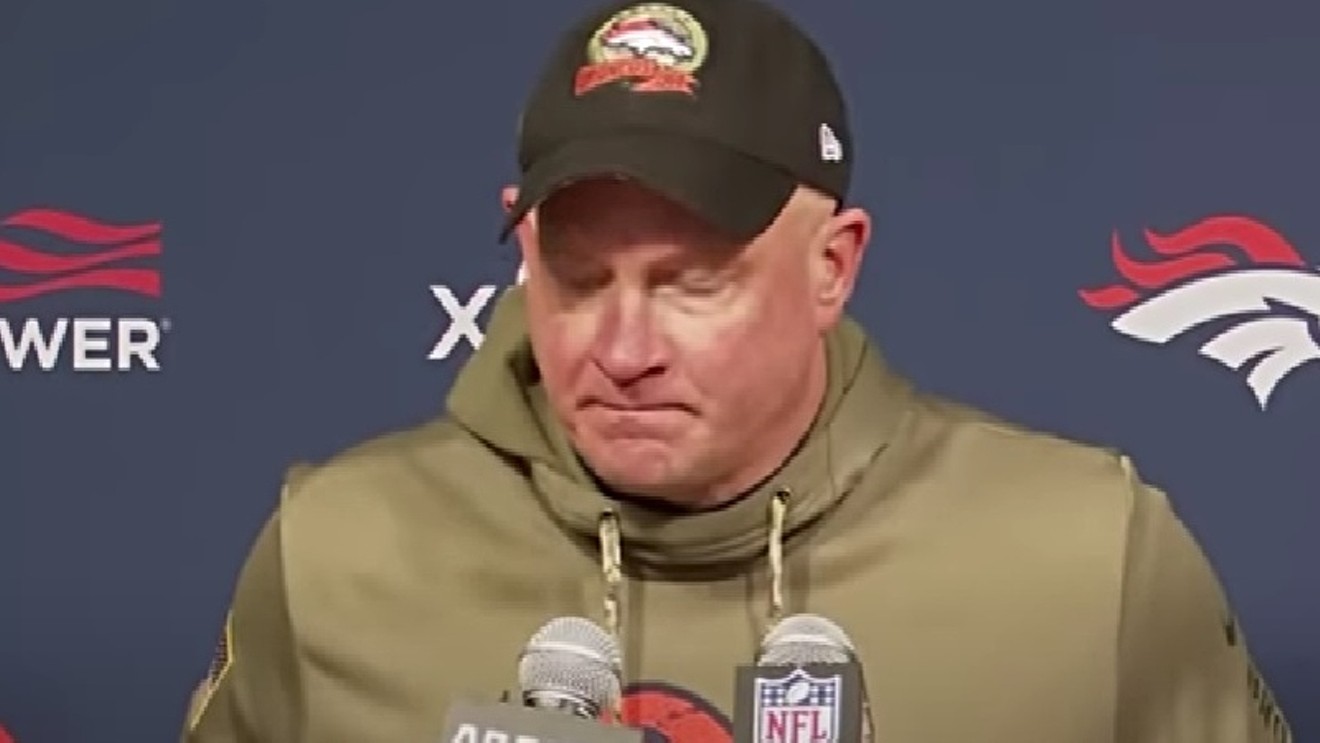 A popular choice: Nathaniel Hackett, who pretty much every citizen of Broncos Country sees as a dead head coach walking. Indeed, speculation about whether Hackett should get the sack has already become secondary to when it will happen (a loss next Sunday to the Las Vegas Raiders and Josh McDaniels, previously the worst coach in Denver history, is a popular prediction) and who should replace him (the top choice appears to be ex-New Orleans Saints offensive mastermind Sean Payton, currently commentating for Fox Sports).

If any Hackett apologists existed, which is debatable, they'd have no shortage of excuses for the Broncos' putrid performance thus far, including the number of injuries the squad has sustained — a situation that grew worse on Sunday after wide receiver Jerry Jeudy and offensive lineman Billy Turner came up gimpy. But there are no rationalizations for his utter inability to make the most of high-dollar acquisition Russell Wilson. Despite having an extra week to figure out how to fix Denver's problems owing to a bye, Hackett continued to employ the same utterly predictable formula, asking Wilson to drop straight back rather than roll out and try to complete low percentage chunk plays — a panicky strategy that worked once (by way of a 66-yard touchdown strike to rookie Jalen Virgil) but generally forced the unit into third-and-long situations that allowed the Titans pass rushers to tee off. Wilson was sacked six times during the contest and harried countless others.

Yes, the defense committed an inexcusable sin, allowing Tennessee to score a late first-half touchdown to trim Denver's lead to 10-7. For the most part, though, defensive coordinator Ejiro Evero has worked marvels with his charges; they held human wrecking ball Derrick Henry to just 53 yards on nineteen carries and forced ex-CSU punter Ryan Stonehouse to kick the ball back to the Broncos eight times. But the closest Denver came to capitalizing was a late drive that ended with Wilson throwing a soul-crushing interception.

"For me, it's about accountability," Hackett said afterward. And Broncos loyalists on Twitter definitely agree.

Continue to count down the ways they hold Hackett responsible for the catastrophic 2022-2023 campaign to date, and what they'd like to happen next.

Has Hackett been fired yet? @Broncos #BroncosCountry

Fire Hackett immediately and begin looking for a coach that can help Wilson find his mojo. Then pray Wilson still has his mojo. Broncos will know by game 2 of next season if this was one of the worst deals of all time.

Hackett definitely gone at the end of the season. I know I was an ass for calling for him to be fired after game 1, but at this point I think I am justified in my thinking. @Broncos I’m ride or die for life. Period. But it’s time. Make the call. It’s time.

Ejiro Evero is doing an unbelievable job, the defense is playing amazing, the game plans are genius. Hackett’s Offense is heavily penalised, doesn’t adjust and is worst in the league. Make a change, bring in Gary Kubiak til the seasons end. He led us to SB50! #BroncosCountry

I’m Ride N Die Broncos Fans Always Will I Think Something Gotta Change Hackett Gotta Go We Got Talented Roster We Should Be At 7-2 RN Right Behind The Chiefs Hackett Is Pat Shurmur 2.0 Hackett Is Not Fit Be A HC George Paton or The Owners Gotta Make A Change RN This Is Bad

I still have McDaniels a slight edge over hackett for worst broncos coach ever. His raiders resume is locking it down imo.

But the season isn't over yet, one of them will make a really stupid push to lock it down.#FireHackett
And fire his staff too.

A Jeff Saturday and Matt Ryan led Colts just put 25 points up in the W against the Raiders. If Hackett can't match or better that on Sunday he should be fired off of the face of the earth. #BroncosCountry

Don’t agree, I’d take Surtain over Fields. IMO, Paton’s biggest mistakes: Hiring Hackett, especially to get Rodgers, was hoping for O’Connell. Giving up too much for Wilson, but worst mistake paying him before he took a snap. The #Broncos have been set back.

Feeling like Nathaniel Hackett shouldn’t be coaching this team next season.

@Broncos are an embarrassment. In every single way. Hackett seems like a great guy, but he’s an absolutely putrid head coach and leader

Walton family didn’t become billionaires by waiting. They will clean house. Next GM of the Denver Broncos will be Peyton Manning. Don’t think Paton can save his job. Walton’s don’t spend five billion dollars without installing their own people. Firing Hackett won’t save his job

Can you please #FireHackett for an early Christmas present to #Broncos fans. We all need to see if Wilson is this bad or if it’s simply that Hackett is the worst #nfl coach of all time. I think #RussellWilson is still good, Hackett would have the Chiefs at a 3-6 record.

I said this on another post but if the colts can fire their coach and hire Jeff Saturday the same day why can’t the broncos fire Hackett and have Sean Payton in the building tomorrow morning?

A.guy that's never coached an NFL game just beat McDoofus and the #Raiders today, if the #Broncos can't win at home next Sunday, it should be curtains for Hackett

Broncos fans every time they hear Hackett after a loss. #BroncosCountry pic.twitter.com/RcsJ3FPCJL

Can we trade Hackett to the Raiders as co-coach with McDaniels for their waterboy. With those to coaching there is no way Broncos could lose. They both would find a way to lose.

Hackett appears to be the only coach who CAN’T beat the Raiders. Sooo…how bad do the Broncos lose to the Raiders???