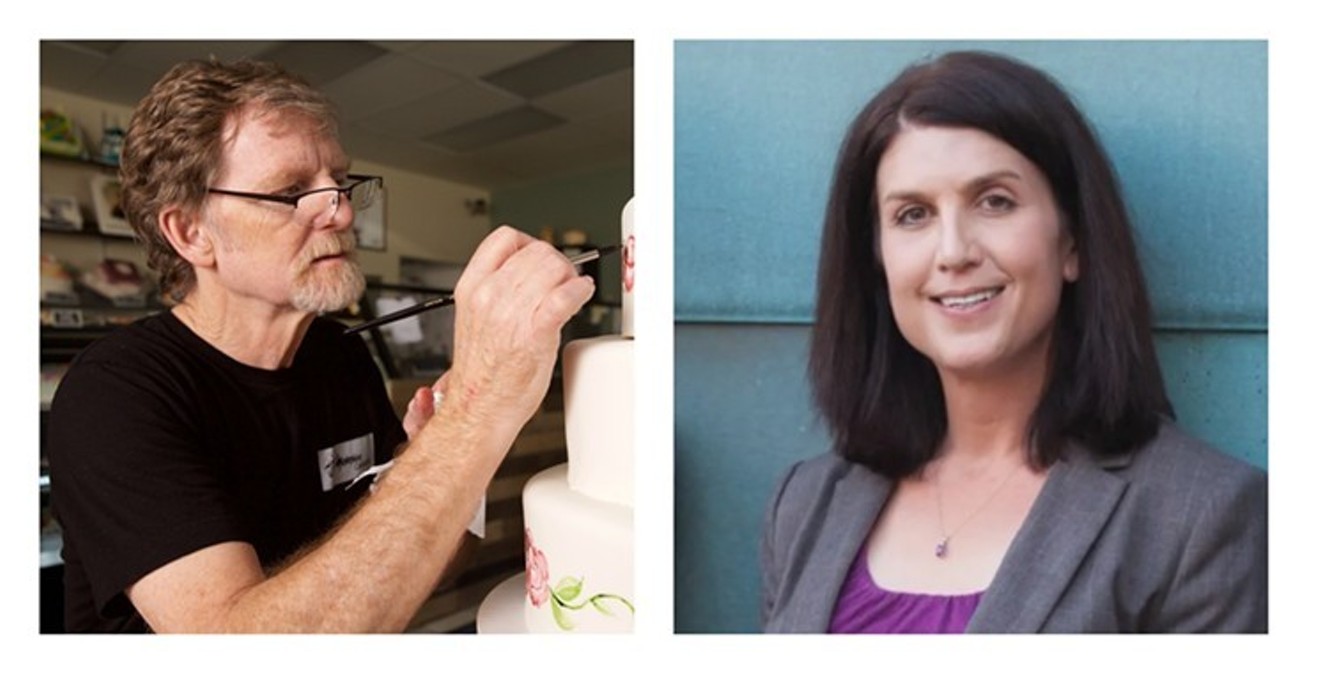 The litigation involving Jack Phillips of Masterpiece Cakeshop and attorney Autumn Scardina isn't over. adfmedia.org/scardinalaw.com
In June, a Denver District Court judge ruled that local baker Jack Phillips had discriminated against Autumn Scardina by refusing to make a pink-and-blue birthday cake for her after learning that she's transgender. But that won't be the final word on the case: Phillips's attorneys just announced that they're appealing the decision.

Phillips, who owns Lakewood's Masterpiece Cakeshop, is represented by Alliance Defending Freedom, an Arizona-based organization that describes itself as "an alliance-building, nonprofit legal organization committed to protecting religious freedom, free speech, parental rights and the sanctity of life." In a statement, ADF legal counsel Jake Warner contends that "Jack has been harassed for nearly a decade for living by his faith and making artistic decisions that artists have always made. That’s why we have appealed this decision and will continue to defend the freedom of all Americans to peacefully live and work according to their core convictions without fear of government punishment."

Paula Greisen, the attorney for Scardina, sees things differently. "ADF is a national and international organization dedicated to eradicating any rights of the LGBTQ community by pushing anti-LGBTQ laws across the country and trying to push that agenda using the court system," she maintains.

Greisen says that she and her client, who is also a lawyer, fully expected that the ADF would appeal, given the outfit's long association with Phillips, who became a darling of the conservative movement following his 2012 refusal to make a wedding cake for a gay couple because of his Christian beliefs. And his reputation was burnished after the U.S. Supreme Court ruled in his favor in June 2018.

This victory didn't translate to the Scardina case, however, and in his June 15 decision, Judge A. Bruce Jones used a disreputed Clinton-era policy to help explain his rationale. "The concept that a business can decide whether to make the requested item depending on what information the customer provides would establish the equivalent of a 'Don’t Ask, Don’t Tell' rule," Jones wrote. "LGBT individuals would be entitled to equal service only to the extent they do not request goods that reflect their identity as LGBT individuals (or at least do not inform Defendants of that reflection)."

At first blush, this ruling would seem to contradict the U.S. Supreme Court determination related to the wedding cake that Phillips wouldn't make for Charlie Craig and David Mullins back in 2012. But in a June interview, Greisen said that the episodes are very different from a legal perspective.

"The U.S. Supreme Court did not invalidate anti-discrimination laws" in the Craig-Mullins case, she argued. "In fact, the court said these laws are quote-unquote unremarkable, because it's been settled for decades in this country that businesses open to the public cannot decide whether to serve someone based on the customer's protected status. The first case involved a very narrow exception because some comments had been made by a state commissioner that had nothing to do with the merits of the case, but that the Supreme Court felt were unfair to Mr. Phillips. And Mr. Phillips made repeated statements throughout the first case that he would sell any other bakery item to an LGBTQ individual, including birthday cakes, but that he only objected to the wedding cake because of its religious significance to him."

Warner believes that Phillips is the one being persecuted. "Activists and government officials are targeting artists like Jack because they can’t promote messages on marriage and gender that violate their core beliefs," he says. "In this case, an activist attorney demanded that Jack Phillips create custom cakes in order to test Jack and to ‘correct the errors’ of his thinking, and the attorney even threatened to sue Jack again if the case is dismissed for any reason. This case and others like it represent a disturbing trend: Activists are weaponizing the legal system to ruin those who simply disagree with them. Someone you disagree with might be the one targeted today, but when political winds shift, it could just as easily be you or anyone else tomorrow."

To Greisen, these charges obscure what actually happened. "As owner of Masterpiece Cakeshop, Jack Phillips testified that he has made the same cake that our client requested for other customers, and would continue to sell that same cake to other customers — but would not sell it to our client because she is transgender," she points out. "We respect Phillip’s right to appeal the issue and have full confidence that the courts will continue to uphold the anti-discrimination laws in our state."

Click to read the Alliance Defending Freedom's notice of appeal, filed with the Colorado Court of Appeals on August 2, and the Denver District Court ruling in Autumn Scardina v. Masterpiece Cakeshop Inc.
KEEP WESTWORD FREE... Since we started Westword, it has been defined as the free, independent voice of Denver, and we'd like to keep it that way. With local media under siege, it's more important than ever for us to rally support behind funding our local journalism. You can help by participating in our "I Support" program, allowing us to keep offering readers access to our incisive coverage of local news, food and culture with no paywalls.
Make a one-time donation today for as little as $1.