The crash site on the morning after. CBS This Morning via YouTube
This morning, 1st Judicial District DA Pete Weir announced the filing of forty criminal charges against Rogel Lazaro Aguilera-Mederos, the 23-year-old truck driver from Houston accused of causing a massive crash on Interstate 70 near the Colorado Mills Parkway exit that killed casino executive Stan Politano and three others on April 25.

In addition to Politano, the victims of the crash were Miguel Lamas Arrellano, a 24-year-old Denver resident, Doyle Harrison, a 61-year-old from Hudson, and William Bailey, a 67-year-old Arvadan. Four additional people were injured.

Weir's revelation comes mere days after Aguilera-Mederos made his first public comments since the tragedy.

His words appeared on the Facebook page of his wife, Nailan Gonzalez. Among Aguilera-Mederos's remarks that she quoted: "God is with me. This is not just what they are doing to me." 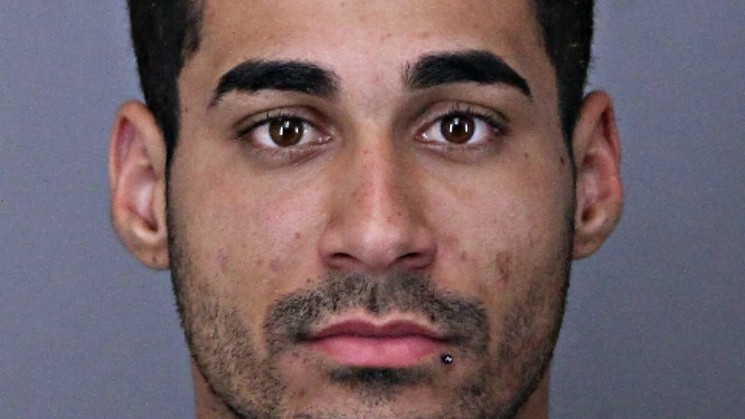 A booking photo of Rogel Aguilera-Mederos.
Lakewood Police Department
Aguilera-Mederos made his first court appearance on Saturday, April 27, before District Judge Chris Zenisek. He was advised of his rights and informed that there was probable cause for his arrest. At the time, Weir's office asked for a $500,000 cash bond for Aguilera-Mederos "considering the extent of the damage, that Mr. Aguilera has no ties to Colorado and is in the U.S. on a green card, and that Mr. Aguilera could potentially face a significant prison sentence." After considering this request, Judge Zenisek set bond at $400,000 cash/surety and affixed the conditions that Aguilera-Mederos not drive upon release and surrender his passport. According to court documents, Aguilera-Mederos, a Cuban by birth who's been in the United States legally for several years, passed by a runaway truck ramp going about 85 miles per hour, and when he saw traffic stopped ahead, he tried to move his vehicle onto the interstate's shoulder, only to realize that another semi was already there. Witnesses told investigators that the expression on his face around the time of impact was wide-eyed and terrified. After the pile-up, which involved 28 vehicles and led to a closure of I-70 in both directions until the next day, Aguilera-Mederos insisted to authorities that his brakes had failed — and Fox31 subsequently reported that the company for which he drove had a history of brake issues on its vehicles.

The charges suggest strongly that Weir and company don't believe equipment failure was at fault.

Aguilera-Mederos is expected to be formally advised of the charges against him this morning.
KEEP WESTWORD FREE... Since we started Westword, it has been defined as the free, independent voice of Denver, and we'd like to keep it that way. With local media under siege, it's more important than ever for us to rally support behind funding our local journalism. You can help by participating in our "I Support" program, allowing us to keep offering readers access to our incisive coverage of local news, food and culture with no paywalls.
Make a one-time donation today for as little as $1.