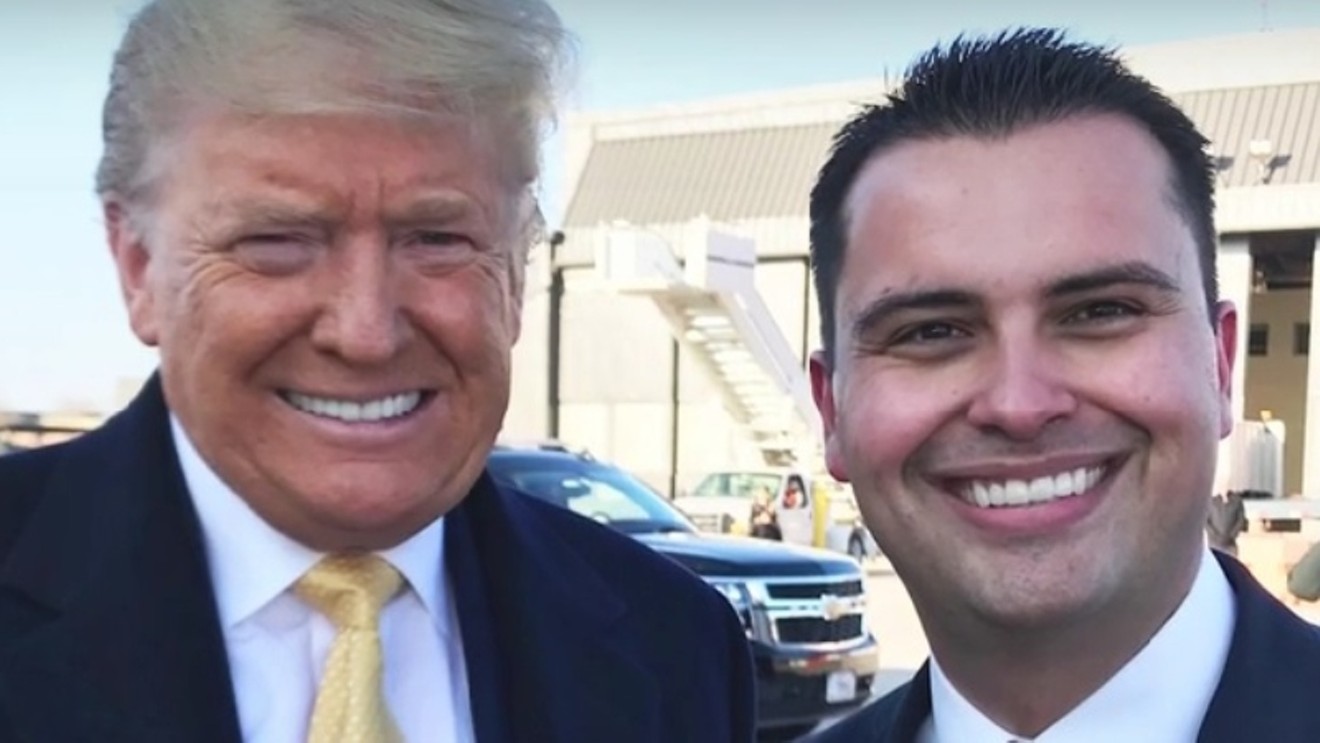 The vast majority of Democrats on the ballot are either running unopposed or taking on incumbents in heavily Republican areas who'll cruise to victory this November unless they are photographed coming out of a motel with several five-year-old girls dressed like beauty-pageant contestants — and maybe even then.

By contrast, in numerous races Republicans are vying against each other to earn their party's nomination, and they tend to be split between more traditional GOP hopefuls trying to pump up their ultra-conservative credentials and far-right disruptors who pattern themselves after a certain sorta orange former president. In other words, Trump Light and Trump Extra Heavy.

To tell who's who, we offer the following guide to contests in Colorado's eight congressional districts and races for the U.S. Senate, Colorado governor and Colorado secretary of state, designed to help both supporters and detractors of The Donald figure out who's the Trumpiest.

Democrat Diana DeGette was first elected to serve Denver's primary congressional district in 1996, and in all likelihood, she'll be able to do so as long as she's still drawing breath. The task of unseating her is so daunting that the Colorado Republican Party seldom spends significant resources on the competition, and prominent politicos steer clear of joining the fray. This year's sole Republican candidate/sacrificial lamb is Jennifer Qualteri, who's not especially Trumpy; her website notes that she was once a Democrat and has spent years "working tirelessly to make [the district] an inclusive, better place." Nonetheless, she's the Trumpiest by default.

Joe Neguse has only been in office since 2019, but he's in a very similar situation to DeGette, his Democratic colleague; he represents a liberal district (it's dominated by Boulder), and Kim Kardashian will quit her assorted reality shows and start working a register at Taco Bell before the area elects a Republican. That's too bad for Marshall Dawson, the only GOP candidate, and therefore the Trumpiest, even though his platform is led by a call to "take school security seriously."

Now we're talkin' Trumpy! Incumbent U.S. Representative Lauren Boebert regularly plasters her social media platforms with photos and text that pay tribute to the guy who lost to Joe Biden, and her use of insults, one-liners and calculated outrage to belittle anyone who isn't American enough by her standards is straight out of her hero's playbook. And because her already conservative district tilted even more in her ideological direction after redistricting based on the 2020 census, Colorado Senator Don Coram faces an uphill battle trying to best her in the primary; in all likelihood, it will be Boebert running against Democrats Adam Frisch, Sol Sandoval or Alex Walker, who describes himself as "a bull, not a bullshitter," come November. In the following Fox Business video, Boebert discusses stopping by the U.S.-Mexico border in Trump's company:
Fourth Congressional District

Incumbent Republican Ken Buck was Trumpy before being Trumpy was cool, and Democrats in his district are in short supply. Democrat Isaac "Ike" McCorkle will have a helluva time Bucking this trend.

Republican Doug Lamborn shouldn't have to sweat reelection. After all, he serves a district that includes Colorado Springs, one of the most conservative cities in these United States. But while he needn't lose sleep over the prospect of suffering defeat to Democrats Michael Colombe or David Torres, he must first deal with not one, not two, but three Republicans who want to return him to private life: Andrew Heaton, Rebecca Keltie and Dave Williams. The latter's home page shows him gripping and grinning with Trump, and he sued unsuccessfully to be identified on ballots as Dave "Let's Go Brandon" Williams. So sorry, Doug: Dave's definitely the Trumpiest.

Jason Crow is a fairly new addition to Colorado's congressional cadre, having come into office in January 2019, but he's already entrenched enough for just one Republican, Steve Monahan, to take him on. But since Monahan's campaign video shows him riding a motorcycle and trying to look like a badass, he more than earns his Trumpy rating.

After Ed Perlmutter decided not to run for reelection, Brittany Pettersen stepped into the footsteps of the longtime Democratic lawmaker — and she's benefiting from the full commitment of the Colorado Democratic Party. Three Republicans are trying to prevent her from succeeding Perlmutter: Erik Aadland, Tim Reichert and Laurel Imer. Our most-Trumpy vote goes to Imer because her online "America First" platform is led by a pitch for border security illustrated by a photo of Big Don walking along part of that beautiful wall he visited with Boebert.
Eighth Congressional District

Yadira Caraveo, the Democratic nominee for this newly created district, is up against a Republican quartet — Tyler Allcorn, Barbara Kirkmeyer, Jan Kulmann and Lori Saine — who have spent months trying to out-Trump each other. Still, we give the nod to Kirkmeyer, for having the chutzpah to run ads like the one above against Saine, one of the most conservative Colorado lawmakers of the 21st century, in which she dubs her "Liberal Lori." Hilarious.

Fighting to take on Democratic Senator Michael Bennet are Joe O'Dea, who is trying to appeal to a broad cross-section of Coloradans, and Ron Hanks, who has championed "election integrity" and boasts a photo on his website showing him "talking to Patriots about their concerns." Mmmmm...Trumpy.

The pair of Republicans trying to oust Democrat Jared Polis share similarities to Bennet's opponents: Heidi Ganahl is approaching the election Three Bears-style, seeking a just-right brand of conservatism that doesn't swing too wildly in either direction, while Greg Lopez is Trumping up his rhetoric in an attempt to stand out and give himself a chance against a much better-funded rival.

No contest. While Republicans Pam Anderson and Mike O'Donnell are infinitely more conservative than  Democrat Jena Griswold, only Tina Peters has actually been indicted for the way she tried to prove election fraud had taken place in Mesa County, where she's still officially the county clerk. She's been officially befriended by one of Trump's main apologists, Mike "My Pillow" Lindell, and even went to the mattresses at one of his hideouts. At this point, even Donald Trump may not be as Trumpy as Tina Peters.
KEEP WESTWORD FREE... Since we started Westword, it has been defined as the free, independent voice of Denver, and we'd like to keep it that way. With local media under siege, it's more important than ever for us to rally support behind funding our local journalism. You can help by participating in our "I Support" program, allowing us to keep offering readers access to our incisive coverage of local news, food and culture with no paywalls.
Make a one-time donation today for as little as $1.