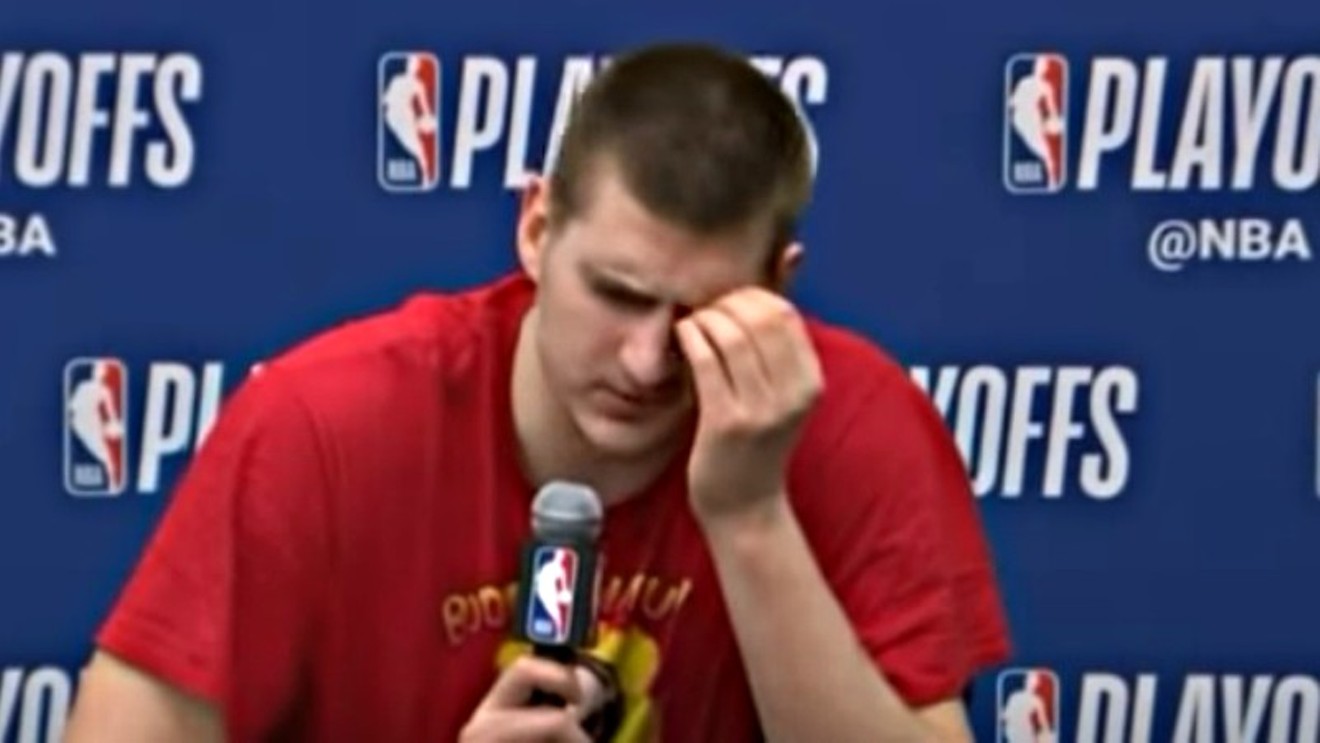 Nikola Jokiic at a press conference following the Denver Nuggets' agonizing loss on May 12. YouTube
The Denver Nuggets had a chance to make franchise history by qualifying for the NBA's Western Conference finals for the first time in a decade. Instead, the young squad pissed it all away, losing 100-96 at home on May 12 to the Portland Trail Blazers.

Afterward, Nuggets fans and foes on Twitter called it what it was. A choke job.

Yeah, yeah, yeah, we know the Nuggets weren't even supposed to be in this position. The squad narrowly missed the playoffs the past two seasons, so no one was expecting 54 wins and a second-place seed. And when Denver's lineup, the youngest in the playoffs, struggled against its much more experienced first-round opponent, the San Antonio Spurs, another early playoffs exit like the one circa 2013 seemed likely.

Eventually, though, the Nugs bested the Spurs, and since Nikola Jokic and company played the Trail Blazers well during the regular campaign (they won the season series 3-1), there was plenty of reason for optimism — especially after Denver took game five in a blowout. All the Nuggets had to do was win one of the next two games in order to earn a trip to California and a finals tilt against the Golden State Warriors; that team's biggest star, Kevin Durant, had just suffered an injury that opened the door to an upset at least a crack or two.

The Nuggets wasted a wonderful opportunity in game six, but the mood remained upbeat in advance of the May 12 contest. After all, Denver had the best home record in the league. And when the Nugs built up a seventeen-point lead, all seemed to be going to plan.

Yes, Jokic scored 29 points and recorded thirteen rebounds, but his shooting percentage was low, and his compatriots came up small when he needed them the most. Jamal Murray's seventeen points seemed like fewer, and Paul Milsap's ten, on three-of-thirteen shooting from the field, was inexcusable. Meanwhile, C.J. McCollum made up for another lackluster performance by star Damian Lillard with a 37-point masterpiece/dagger.

The Nuggets brass no doubt hoped fans would react with equanimity by noting that the team had overachieved. But their sky-high expectations led them in a different direction. Count down our picks for the twenty most memorable tweets about the loss to see what we mean.