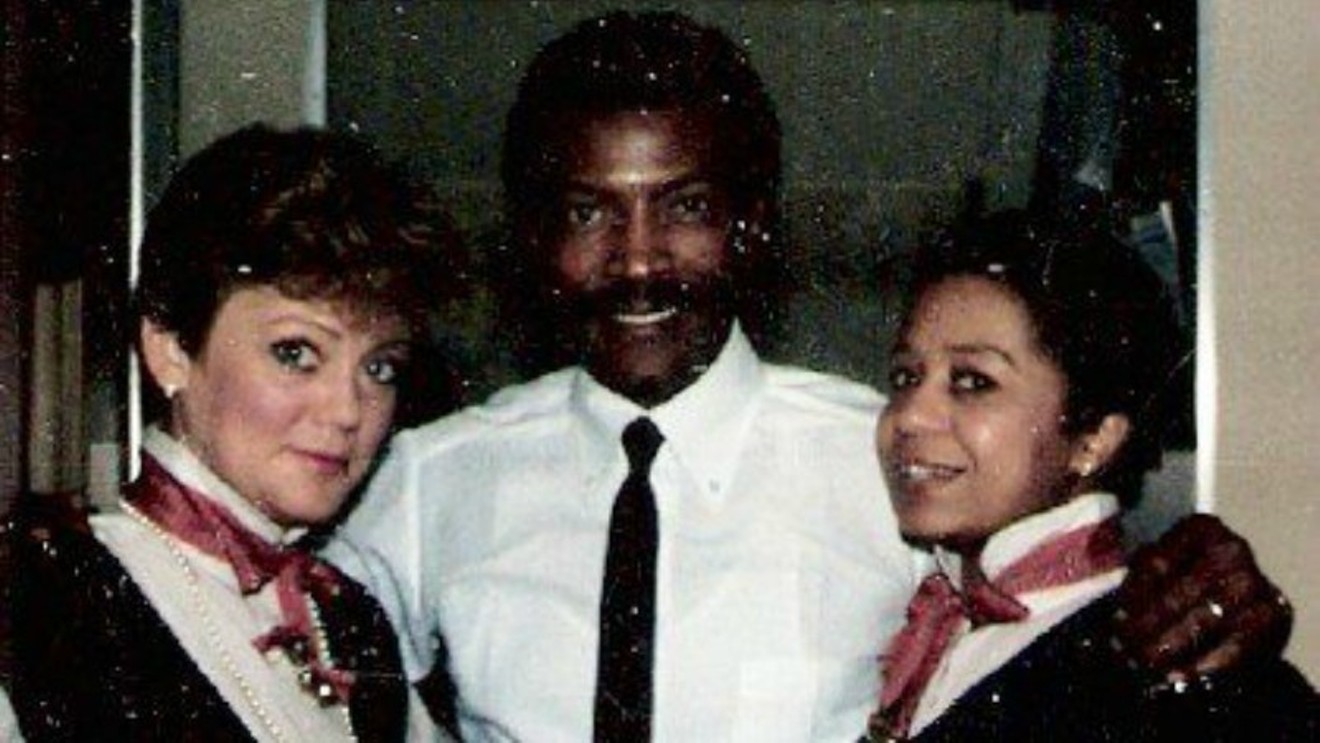 Ruben Lee, center, with fellow flight attendants during an earlier part of his United Airlines career. Courtesy of Ruben Lee
Nearly four years ago, Westword published a story headlined "Firing Flight Attendants Who Watched an iPad May Cost United $1.5 Million." But this amount turned out to be low: After a February 28 ruling by the 10th Circuit Court of Appeals in favor of the plaintiffs, Ruben Lee and Jeanne Stroup, the total payout by United Airlines will likely be closer to $2.3 million.

The 2018 U.S. District Court decision upheld by the 10th Circuit contended that United violated the federal Age Discrimination in Employment Act of 1967 by using the iPad viewing, which occurred during a break, and the failure to wear an apron during one drink service as an excuse to can Lee and Stroup, who had a combined 71 years of airline experience. To attorney David Lane of Denver-based Killmer, Lane & Newman LLP, the latest ruling underscores the injustice.

"United should have been recognizing the value of these employees, of their experience and dedication," he says. "Instead, they treated them like fungible goods."

The original complaint, filed in 2015, outlines the stellar careers of Stroup and Lee. Stroup spent 35 years at United, starting out in 1978 as a reservation representative and earning a promotion to the technical-support team before becoming a flight attendant in 1984. During the years that followed, she worked approximately 30,000 flight hours over 29 years, missing only one check-in along the way despite the occasional weather challenges in Denver. She never received a single customer complaint and wasn't disciplined by United — until she was sacked.

Lee's record at United is similarly impressive and even longer; like Stroup, he had an unmarked record when it came to customer service and in-house discipline during forty years with the airline. He also received a silver chalice commemorating his participation in the Magnificent 700 Road Show, a traveling troupe that entertained flight attendant meetings. He also served as a model for new flight attendant uniforms and regularly worked charter flights for the Denver Broncos during a period when the team won two Super Bowls.

A photo of Ruben Lee dating to around the time the lawsuit was filed.
Courtesy of Ruben Lee
Lee was also commended for his actions during a 1974 flight that experienced an emergency en route to Washington, D.C. "He helped unload a plane that was forced into a belly landing because its landing gear wasn't working," Lane explains. "He was given an award for being courageous and getting everyone off the flight unhurt."

Nonetheless, the pair were pink-slipped after they were observed on a 2013 flight from Denver to San Francisco sharing an earbud to watch an iPad and serving without an apron — infractions the lawsuit deems "trivial."

Back in 2018, Lane told Westword that United had no system for determining discipline levels for rule-breaking: "It was solely at their discretion — in the eye of any individual supervisor how serious any violation was. And that was part of our case."

How did the jury respond to this assertion? "Oh, my God," Lane recalled. "They just rolled their eyes and sat back in their seats."

Jurors took fewer than five hours to find in favor of Stroup and Lee, but United appealed the case, claiming that the lower court had erred in several technical areas. The judges on the 10th Circuit Court of Appeals took these assertions seriously; their ruling runs fifty pages. But the bottom line remained the same. "The evidence was sufficient for the jury to reasonably conclude that United acted willfully in discriminating against Plaintiffs on the basis of age," it states.

When Stroup and Lee heard about the 10th Circuit's opinion, "they both cried. They've been hoping and praying for this for years, and now it finally seems to be ending," Lane says.

"In this day and age, airline employees are on the front lines of air safety, and I'm not just talking about pilots," he adds. "I'm talking about flight attendants who have to go face-to-face with the public. It's a very difficult job, so to come up with pretextual reasons for firing people when the real reason is discrimination based on age is reprehensible."

Click to read Jeanne Stroup and Ruben Lee v. United Airlines and the 10th Circuit Court of Appeals ruling.
KEEP WESTWORD FREE... Since we started Westword, it has been defined as the free, independent voice of Denver, and we'd like to keep it that way. With local media under siege, it's more important than ever for us to rally support behind funding our local journalism. You can help by participating in our "I Support" program, allowing us to keep offering readers access to our incisive coverage of local news, food and culture with no paywalls.
Make a one-time donation today for as little as $1.