Video: Was Gun Put Under Jesse Cedillo's Body After Cop Killed Him? 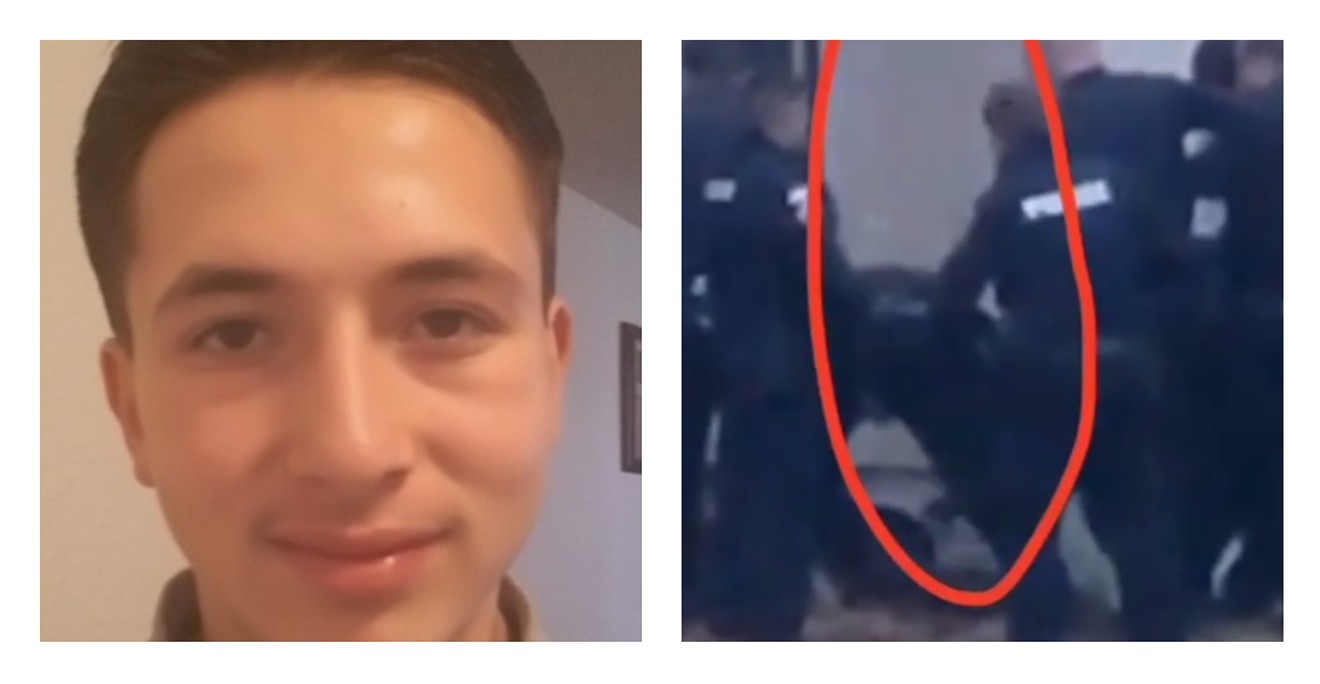 A portrait of Jesse Cedillo and a screen capture from a Pueblo Police Department video that advocates feel shows an officer placing a gun under his body. Courtesy of Lynnett Fox
In March 2020, twenty-year-old Jesse Cedillo was killed by a barrage of fifteen shots fired by a deputy sheriff in Pueblo — actions subsequently deemed justified by the district attorney charged with looking into the case.

But Lynnett Fox, Cedillo's mother, who's scheduled to be at the center of a virtual event about her son's death scheduled for Saturday, April 3, wasn't satisfied with that determination. Although the decision letter issued by 10th Judicial District District Attorney J.E. Chostner repeatedly stresses that Cedillo was armed with a handgun, and Pueblo County Sheriff's Deputy Jeffrey Alfonso says the weapon was pointed at him before he began repeatedly pulling the trigger of his own gun, body-worn camera video of the shooting doesn't clearly show a firearm in Cedillo's possession. Indeed, Cedillo seems to have his hands raised in what could be interpreted as a gesture of surrender as the bullets tore into him.

Fox doesn't know how many times she's looked at video captured the day her son died. But in recent weeks, she made a new discovery. She stumbled upon a clip that she believes shows a law enforcement official placing a gun under Cedillo's body.

This sequence of events made a horrible sort of sense to her. After all, she says, multiple neighbors who witnessed what happened didn't see Cedillo holding a gun before he was shot. So she posted the video on Facebook along with a neutral introduction asking others if they saw it, too. "Every single person said, 'Oh, my God, they dropped the gun,'" she explains. "And other people were like, 'I knew it. I knew it.'"


The Pueblo Police Department had another response after Westword sent the video clip: A spokesperson declined comment. And DA Chostner told us that he would prefer for his decision letter, dated August 25, 2020, to speak for him.

With authorities in Pueblo apparently uninterested in taking another look at the case, Fox, assisted by advocates such as Iris Butler of TAndl Voice, which describes itself as a "nonprofit organization that serves Denver’s Homeless community as well as families fighting social injustices all over the USA," has been looking for help in other quarters. She's launched three separate petitions calling for an investigation into Cedillo's shooting — one with more than 1,600 signers, a second supported by over 21,000 people, and a third launched this week that documents 36 police shootings in Pueblo since 2013, most of which involved people of color.

In addition, both Fox and Butler say they've contacted the Colorado Attorney General's Office and the office of Governor Jared Polis requesting a state probe into the Cedillo shooting, thus far without success. According to Colorado AG office spokesperson Lawrence Pacheco: "The attorney general’s office cannot comment on or confirm the existence of an investigation. Therefore, we have no comment." And while Polis's office offered no official response, a source there contends that no such request has been received — a claim that flabbergasts Fox. "I've called and emailed them a million times!" she exclaims.

The summary of the incident certainly makes the killing of Cedillo seem open and shut. At about 6:30 a.m. on March 14, 2020, Pueblo County Sheriff's deputies were dispatched to a reported carjacking of a 2016 Nissan Versa at the Pueblo Youth Services Center, at 1406 West 17th Avenue. A woman there told deputies that a Hispanic man had taken her vehicle at gunpoint, and security video footage is said to have confirmed her account. Shortly thereafter, a deputy spotted the Nissan nearby, prompting a car chase that ended with a crash not far from the Colorado State Fairgrounds.

Alfonso maintained that he was "afraid for his safety and the safety of the community" and that Cedillo had a gun in his right hand. He insisted that he didn't begin firing until Cedillo raised the weapon.

Does Alfonso's body-camera footage confirm this tale or contradict it? See for yourself:


The report is massive, totaling 119 pages, and includes crime-scene photos and more. But Chostner's conclusion is simplicity itself: "Deputy Alfonso complied with law enforcement standards as set forth by the State of Colorado when he attempted to detain and/or arrest Jesse Cedillo."

Fox isn't convinced that Cedillo was actually part of the carjacking — she refers to the perpetrator as "somebody who looks like him" — and even if he was, she says she is absolutely certain there was no need to shoot at him fifteen times. "He had his hands up and he didn't have a gun," she insists.

Many of those who agree with Fox gathered this past Saturday, March 27, at Denver's Civic Center Park for a peace march intended to raise the profile of the case — but given its timing, several days after a mass shooting at a King Soopers in Boulder that killed ten people, the get-together didn't garner significant media attention. Still, Fox is hopeful that the aforementioned virtual event will help bring what she refers to as "justice for Jesse."

The event gets under way at 11 a.m. on April 3. Click for more details, as well as to view the Jesse Cedillo decision letter.
KEEP WESTWORD FREE... Since we started Westword, it has been defined as the free, independent voice of Denver, and we'd like to keep it that way. With local media under siege, it's more important than ever for us to rally support behind funding our local journalism. You can help by participating in our "I Support" program, allowing us to keep offering readers access to our incisive coverage of local news, food and culture with no paywalls.
Make a one-time donation today for as little as $1.