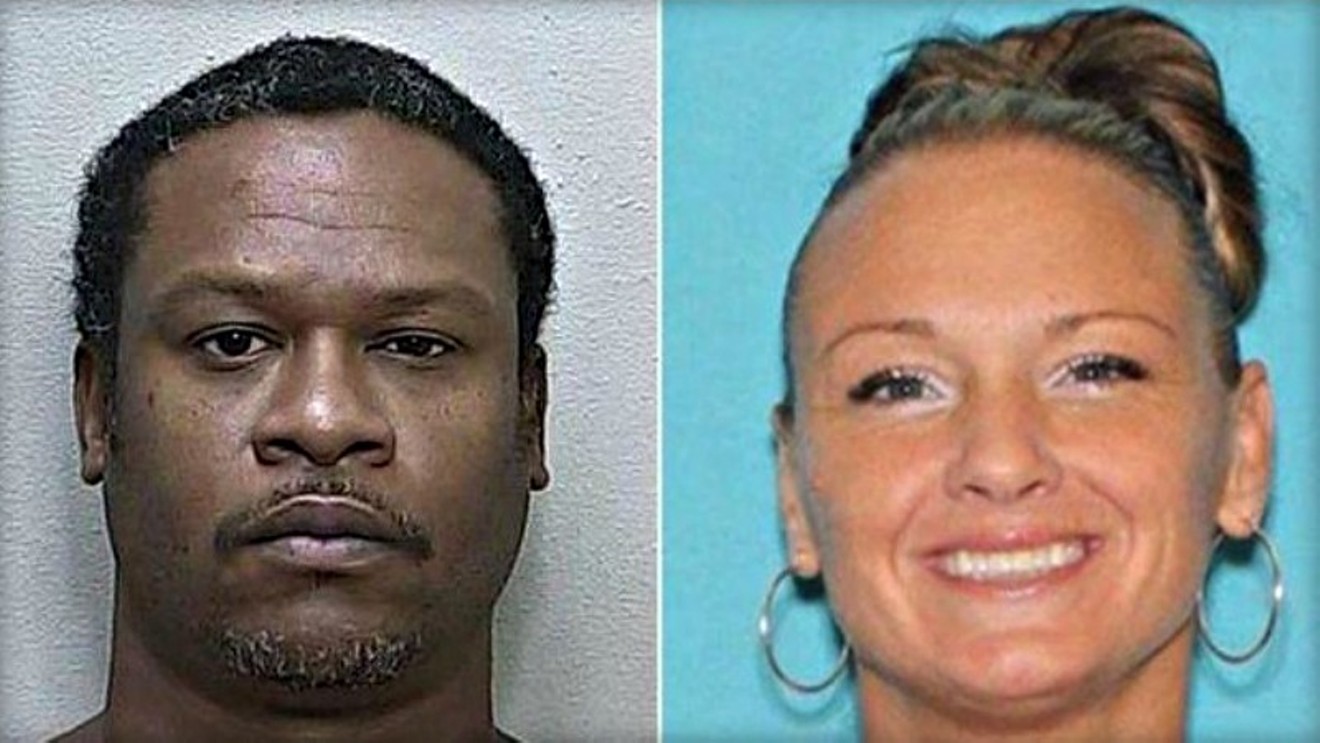 A booking photo of Vincent Terry, who's been arrested in the murder of his wife, Chrystal Terry, right. Marion County Sheriff's Office
One of the most disturbing crime stories in the nation right now involves Vincent Terry, who was arrested in Florida for allegedly killing his pregnant wife, Chrystal Terry, and taking photos of her corpse. But a Colorado connection to the case that we reported about nearly four years ago makes the latest events even more horrific.

After an arrest in Florida for another bizarre incident, Terry was transported back to El Paso County, where he was wanted for attempting to kill Chrystal. However, she refused to cooperate with authorities, resulting in his release, which made the latest tragedy possible.

The new arrest affidavit in Terry's name is accessible below.

In our previous coverage, published on April 25, 2014, we noted that Terry was wanted on charges of attempted murder, domestic violence and possession of a Schedule II controlled substance. 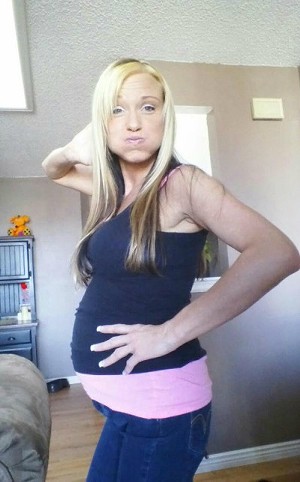 A Facebook photo of Chrystal Hassell, later Chrystal Terry, when she was pregnant with her first child.
Facebook
But rather than facing the music in Colorado Springs, he and Chrystal, then known by her maiden name, Hassell, gathered up their then-eleven-month-old son and headed to Ocala, Florida, where Terry's father lived.

Chrystal was pregnant again by the spring of 2014, but she told a reporter at the Ocala StarBanner that she hadn't realized it until she was six months along, partly because of the amount of crack she had been consuming. She insisted that she'd tried to quit upon discovering that she was with child, but her addiction was too strong, and by April, she was using again.

That same month, Chrystal decided she no longer wanted to stay with Terry's dad. So she and Terry decamped for a motel called the Vacation Host Inn. But things soon went terribly wrong.

Hassell told the StarBanner that Vincent took their son back to his father's house, where he hoped to pick up some clean clothes and sheets for her. But on the 14200 block of Southeast 36th Avenue, he was pulled over by local police, allegedly for improper window tinting.

Upon checking Terry's license, they discovered he was a fugitive from Colorado. But closer examination of the vehicle revealed a more immediate issue: a huge bloodstain on one seat.

When quizzed about the blood, Vincent reportedly told police his girlfriend had miscarried earlier that day. She'd supposedly bled in the car en route to the hospital — and upon her release, had asked to lie down at the motel.

The cops allowed Vincent to call Chrystal and let her know he was headed to jail — bad timing, since she soon realized she was about to give birth. She eventually did so in her motel room's bathtub, after which she severed the umbilical cord with her teeth. When she realized the baby was turning blue, she says, she helped revive him with short breaths before calling 911. 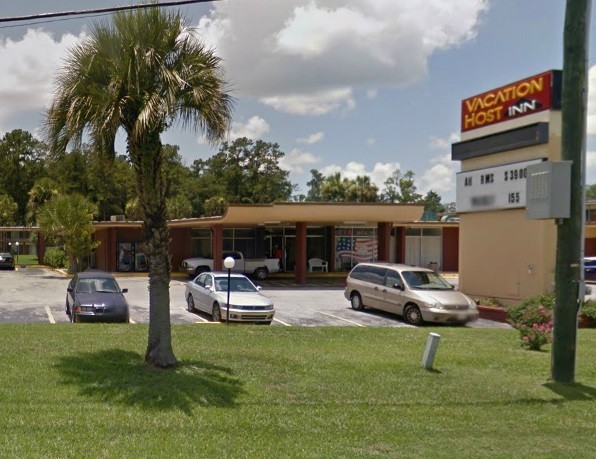 The Vacation Host Inn, where Chrystal gave birth in 2014.
Google Maps
Astonishingly, the baby survived this process despite being very premature. Chrystal, for her part, was put on suicide watch. But Terry, speaking from the jail where he was awaiting extradition to Colorado, remained optimistic about the future of their relationship.

"Of course we're going to stay together," he said, adding that Hassell is "not a bad person. She just got a problem, and together we'll fight it."

For her part, Chrystal said she and Terry were in love even though "we're the worst thing for each other."

Back then, the details of the accusations against Terry in El Paso County hadn't been made public. But the aforementioned affidavit reveals that he had been taken into custody after stomping on Chrystal's face while wearing boots and choking her until she lost consciousness, supposedly because she refused to engage in oral sex with one of his friends.

Chrystal was hospitalized with facial fractures after the attack, the report goes on, but she left the facility against medical advice and refused to cooperate with the investigation further. And her actions were similar after Terry was extradited to Colorado. "Due to Chrystal being unavailable and uncooperative, the charges were dropped," the report reveals. 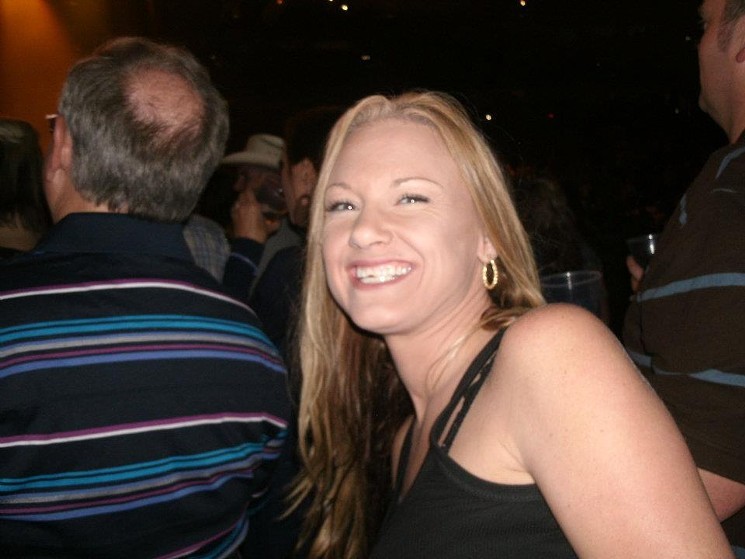 Another Facebook photo of Chrystal Terry.
Facebook
Cut to Christmas Day of 2017. According to the affidavit, Terry, who was living in the Florida community of Summerfield, reported that Chrystal had walked away from their residence four days earlier, at around 9:30 p.m. on December 21, leaving behind her cell phone, wallet, purse and medication that she took on a daily basis. At the time, Terry said, she was eighteen weeks pregnant.

Because of her pregnancy and her need for medication, Chrystal was designated as a missing, endangered adult on January 8, the document continues. Eight days later, his home was searched, and authorities found a .22 caliber rifle and spotted what appeared to be blood spatter on a living room wall.

Terry's cell phone was also confiscated, and technicians were able to extract what are described in the police report as "multiple photographs...of what appeared to be a nude, white female, with facial trauma and a large amount of blood on her upper body, with blood smeared all over her body. There was also what appeared to be a gunshot wound to her stomach/abdomen area, with a small amount of blood escaping from it."

The document adds: "The small amount of blood coming from the gunshot wound can be indicative that she was shot near or after the time of death. The photos depict her body lying lifeless on the carpeted floor." Moreover, the time stamp on the images were established as approximately 9:45 p.m. on the 21st.

In a latter interview with investigators, Terry admitted that he and Chrystal had "gotten into it" prior to her departure and admitted to having taken photos of her after she'd ingested some pills, supposedly to show her later what she looked like under the influence. But when the interviewers mentioned the gunshot wound, he abruptly ended his account and asked for an attorney.

Terry remains in custody on suspicion of second-degree murder.